https://www.youtube.com/watch?v=YVNlvnsQ828
October 9th, 1996. The first day I officially learned how to hate. We flash back to Yankee Stadium and Game 1 of the 1996 ALCS. The Orioles were up 4-3 heading to the bottom of the eighth inning when Armando Benitez got the first batter of the inning to strike out. Next up was a rookie by the name of Derek Jeter. On the first pitch of the at-bat Jeter pokes one out to right field. In any other stadium that ball is a routine fly ball, but not in Old Yankee Stadium, or New Yankee Stadium for that matter.
Right fielder, Tony Tarasco had a good read on the ball, tracked it to the wall, planted himself exactly where the ball was going to come down, and put his glove up. The ball never reached his glove. That is because a fat 12-year-old named Jeffrey Maier stuck his fat hand and fat glove out OVER the wall to catch the ball. Let me repeat, HE STUCK HIS HAND AND GLOVE OVER THE WALL TO GET THE BALL. Tarasco immediately points straight up to that LOSER to point him out. Too bad that idiot didn't even catch the ball, it hit his glove and fell into the stands. Idiot. Just look at how far his arm was over the wall. Where are his parents? Did he have any parental supervision at the game? The security there was unbelievable that night, letting a little child that close to the field without a leash on him. 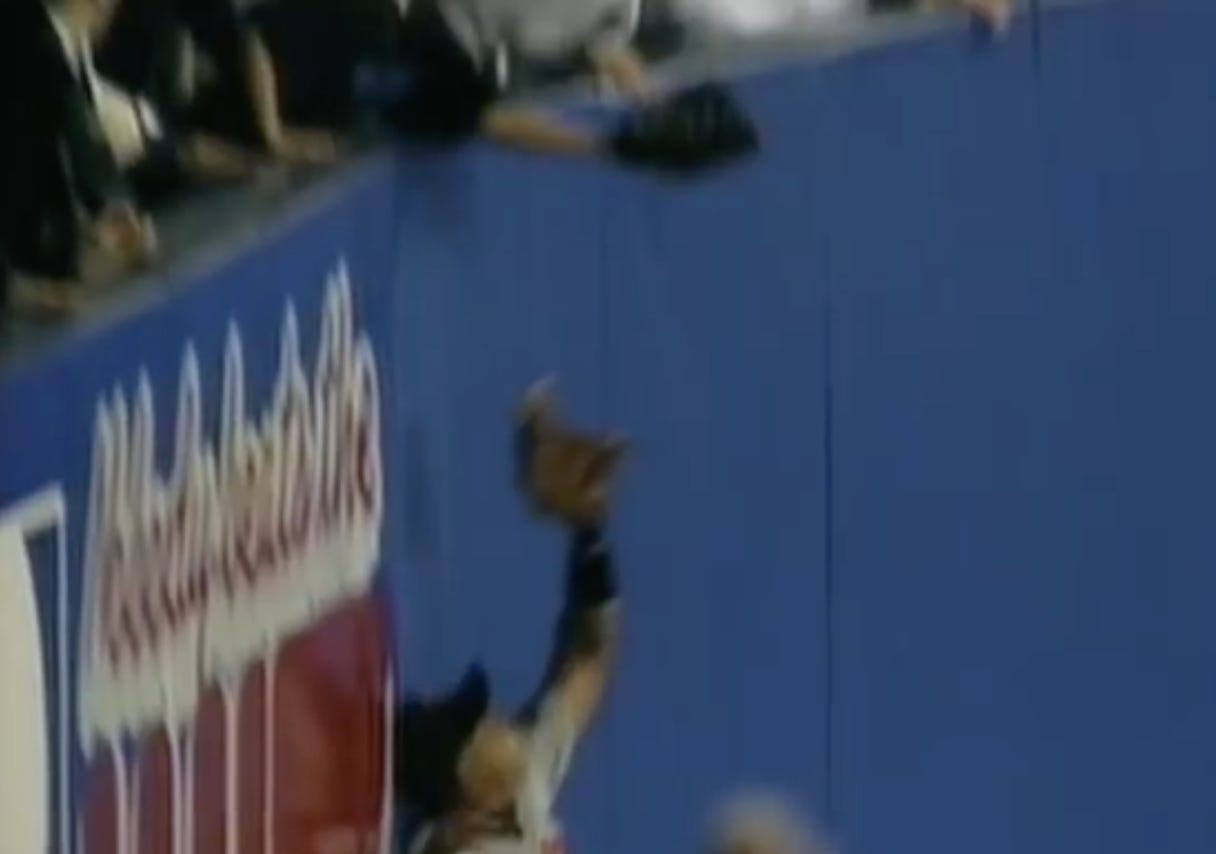 I mean listen to the call by Bob Costas, it was insanely clear the ball was interfered with and shouldn't have been ruled a home run. That ball was an out if I've ever seen one. You want to know why people all over the country HATE the Yankees? Look no further than this clip.
Umpire, Richie Garcia stood there and motioned for a home run like that ball was hit into the upper deck. Hey Richie, are you kidding me? Open your eyes, bud. I've never seen a ball more clearly interfered with. Brady Anderson ran over from center field, Armando came over from the mound, Orioles' Manager, Davey Johnson ran out to protest the call, but god damn Richie Garcia was stuck in his ways. The game was tied, and Bernie Williams would go on to hit a walk off home run that night to give the Yankees a 1-0 lead in the series. The Orioles won Game 2 and went home with home field advantage, but couldn't wrap it up and would lose 4-1 as the Yankees advanced to the World Series. That World Series title should have an asterisk next to it if you ask me. Cheaters, just stone cold cheaters.
I think this was the first time I ever cursed in my life. 7-year-old RDT was standing in his neighbor's living room just screaming and crying. It was the worst day of my life at that point. All of Baltimore still hates that little twerp. There was talk of the Orioles drafting him a few years back when he played D-3 ball. Forget that. No one wanted this virgin anywhere near this franchise. He completely changed the course of the two teams.
If Maier keeps his dirty mitts to himself the Orioles go onto win that game, they likely win the series after going up 2-0 the following night, they STEAMROLL the Braves, and they win multiple titles. I go to a few parades, and have a great time. Derek Jeter is nothing more than an average shortstop (which he was), he never dates Mariah Carey, he eventually leaves the Yankees when his rookie deal is up, Joe Toree is fired a few years later because he can't overcome the Orioles dynasty, the Yankees eventually fold into the ground and all is right in the world. That is exactly what would happen if that kid keeps his hands to himself.
Even 22 years later, people in Baltimore get red with anger when they hear the name "Jeffrey Maier". I mean I started foaming when I saw this was the anniversary. I swear to god that kid ruined my childhood, and probably my life. I found his twitter a few years back and was prepared to absolutely light him up, but all he did was tweet about his kids, so I decided to be the bigger man. But if I ever see him in person, it's on. It's so on.
This is my official request to fight Jeffrey Maier AND Richie Garcia at Rough N' Rowdy 6.