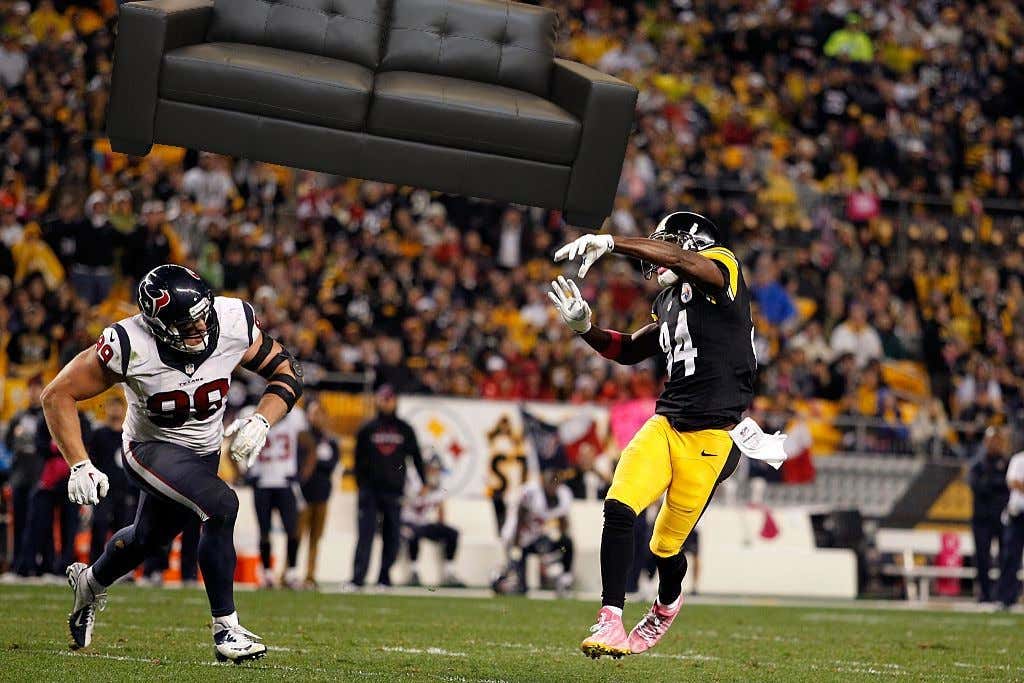 TMZ Sports- Antonio Brown went into a violent rage back in April and threw a bunch of furniture off the balcony of his 14th story apartment nearly killing a 22-month-old toddler … so says a lawsuit obtained by TMZ Sports.

The Pittsburgh Steelers star WR has been sued by Ophir Sternberg — who claims his 22-month-old son was walking around the pool at a high-end apartment complex with his grandfather when suddenly “large objects started to fall from the building many floors above them.” Sternberg claims the items included 2 very large vases, a heavy ottoman and other pieces of furniture — which landed within a mere foot or 2 from the toddler and his grandfather.

Security and police were called to the scene and determined the items came from Brown’s place — and the whole thing was captured on surveillance video. Sternberg claims “Mr. Brown was extremely agitated, acting aggressively, and yelling at security personnel when [police] arrived to the scene.” Brown also caused extensive damage to his own unit “in a fit of rage,” the lawsuit says.

Sternberg claims his child was terrified and traumatized by the incident — he has night terrors — and he’s lucky he wasn’t killed or severely injured. He’s suing for assault and intentional infliction of emotional distress — claiming Brown acted “without regard for human life.”

Welcome to another episode of “As The Steelers Turn”

Welp, I think we have officially found our “I will not be surprised by any headline involving this franchise anymore” team for the 2018 season, with the Steelers taking the baton from the team that held the crown last year, their sister franchise the New York Football Giants. I don’t know how this would be possible since it happened in April, but I feel like Le’Veon Bell is somehow going to be blamed for this because he is holding out.

Antonio Brown has always been a different cat. But those very much alleged charges seem reckless, even for a guy that has been been living on the blog circuit with trade requests, no-shows at practice, and the like. Don’t get me wrong though, I understand where AB is coming from. Everybody hates redecorating their home. Since I am poor, my house is full of nothing but Bob’s furniture made from pretty much sawdust and I dread having to lift up my couches as my wife looks to redecorate the house every 6 months to setups that require you turn your neck 90 degrees to see the TV. However based on his training camp cars, haircuts, and overall swagger, I bet Antonio has the most beautiful, eccentric, expensive furniture on the planet that has to be cycled in and out based on the always-changing trends.

However, since Antonio is a star wide receiver that was paid a bag that keeps Le’Veon Bell up at night, he doesn’t have to list his old shit on Craigslist and hope for some shlep to pick up the couch he farted on for years. He can just dispose of the old and bring in the new. The one problem is that fashionable furniture always is built in shapes out of a geometrist’s wet dream, which makes them awkward as fuck to move through a hallway and out of a building. Luckily star wide receivers also don’t need to deal with the freight elevator, which is why it gets tossed off the balcony like Roger Podactor (RIP In Peace) did after he found Captain Winky. Let the bottom floor bourgeoisie deal with that nonsense. Sure there may be actual humans down there, but did they ever lead the NFL in receiving twice or play a role in winning millions of fantasy football teams titles? I don’t think so. Plus everyone that used to watch Letterman knows how fun it is to throw breakable shit from the top of a building.

So a word of advice to all the people and parents out there: If you or your children are within earshot of a Steeler during the 2018 season, you better have your head and your children’s heads on a swivel at all times. Trust me, I know how scary night terrors can be.

Also credit to me for not bringing up how if Odell Beckham was accused of this, fans from all 32 teams would show up to MetLife Stadium holding pitchforks and torches while every media outlet on the planet pumped out stories headlined “Beckham Almost Kills Kid During Tirade”. I would hate to bring light to the double standard Odell is held to because of the city he plays for.