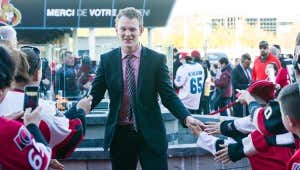 So the Senators are a franchise that is basically in shambles right now. They are talking about moving the team out of town, they traded away their franchise defenseman this summer and have no first round pick this year. I’ll tell you one thing they did do right though, was draft Brady Tkachuk.

Tkachuk joined Alex Formenton and Maxime Lajoie on TSN to talk about their first experiences in the NHL, what it has been like, and what they did first when they found out that they had made the team. That is when Lajoie gives an answer that Brady didn’t like.

Buddy texted his girlfriend first. His girlfriend! Was she there lacing up his skates at 6am in -10 degree weather? Was she there on the 5 hour road trips to watch a pointless pee wee tournament in the middle of no where? No. Absolutely mind blowing Lajoie didn’t text his parents first.

You are nothing without your parents, especially in the hockey world. It costs a lot of money to play hockey and is a huge commitment from not just yourself, but your parents. And this guy over here wants to text his girlfriend first? Buddy you are 20. You’ll probably have a new girlfriend in two months.

I am so rattled by this. I can think of a million people I’d text before I’d text a girlfriend. Parents, grandparents, siblings, best friends, teammates, old coaches, trainers, like what are you doing bud.

Want to make matters worse? Lajoie scored his first NHL goal the other night and had his parents in tears. Seems like they are pretty invested in this hockey thing their son does, eh?

Thank god for kids like Brady Tkachuk. You KNOW his first text was to Big Walt thanking him. Such an A+ response, too. No question Lajoie is going to get bagged on in the locker room all year for that one.

Want to turn the franchise around in Ottawa? Let the Tkachuks run the show.