So NESN dropped this clip of me from the clouds last night. Me and my buddies outside Fenway in 1999 before the Yankees Red Sox ALCS. A game by the way in which we knocked Roger Clemons out of the game in like the 3rd inning and the entire crowd was chanting “Where is Roger?” for the rest of the game so loud you could hear it from Maine to Mexico. A game my buddy Hazy who is in this video turned down 3 thousand cash for his ticket. A game that sparked one of the wildest and most fun post game celebrations I’ve ever been a part of on Landsdowne Street. And yes I went to every game that year and sat in the last row of the bleachers.

Anyway I have no idea how they found this clip. How they realized it was me. Or where it came from. I’m almost positive it never aired on TV because none of my buddies had seen it before or knew it existed. Obviously lots of people are buzzing about it. They are saying I’m the beta of the group. They are chirping my facial hair and the fact I didn’t hog the camera blah blah blah. They are saying I must be embarrassed. Umm I don’t know what world people are living in. I LOVED this video.

I mean it was the 90’s. Anything went in the 90’s. It was like the wild wild west of facial hair. Of course I had a chin strap and some weird goatee thing. I was living the dream. Just a young pup with my Yankees Suck shirt looking for blood in the streets.

Second this video just shows why I became the heartbeat of the Boston sports fan. This was basically 5 years before I started Barstool. I lived and breathed Boston sports. I sat in the bleachers in 86 and watched Bruce Hurst beat the Angels. I cried when we lost to the Bears in 85. I went to every playoff game in 99. I waited in line for 24 hours in sub artic temperatures for Patriot playoff tickets to see the fog bowl against the Steelers. I loved Boston sports and was sick and tired of the stuck up Boston Sports media always trashing Boston sports teams and taking the fun out of Boston sports so I started my own thing. Now look at me. I’m rich as fuck and the king of Boston Sports media and beyond. It all started with a north shore kid, a chin strap and a dream.

And yes it’s kinda weird I didn’t talk to the camera at all. I think I was too focused on screaming at any Yankee fan who even dared make eye contact with me. I mean I nearly jumped that guy at the end for just walking past me in Yankee clothes. 90’s Dave hated the Yankees with white hot passion of a billion burning suns. It literally consumed me until we finally beat them and became the new bully on the block like we are this year. Now we are the hunted and they are the hunter. It’s crazy how much things have changed, but the hatred still remains the same. 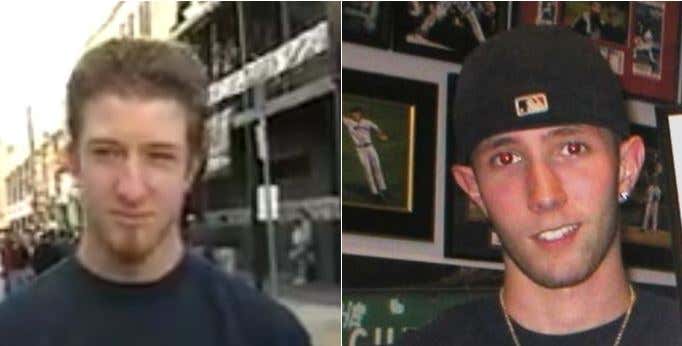