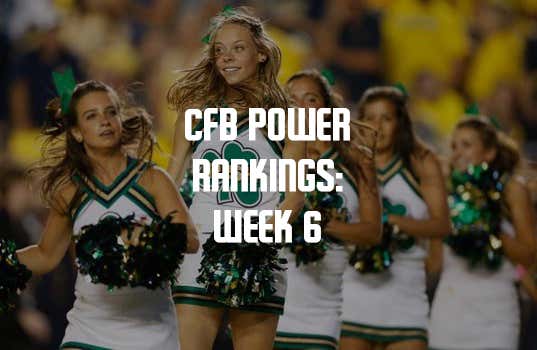 Power rankings……WEEK 5! Just a reminder: this is not an AP Top 25 or a ranking of who is going to get into the CFP. Instead, this is a look at who I believe is the best teams are 1-130. For example, last year I saw Ohio State, Penn State, and Wisconsin as better teams at the end of the season than Oklahoma (yes, I know they beat OSU) and Clemson. Did they have the same resumes as those two playoff teams? No, that’s why they didn’t get in, but if they played a game on January 15th, I would’ve put OSU, PSU, and Wisco as favorites over Clemson and Oklahoma.

The number next to each team is their power rating. It’s my way of comparing two teams. For example, I have Notre Dame at 89.5 and Virginia Tech at 74. I’d set the line at Notre Dame -11.5 (taking 4 points of home field advantage into account), while the line right now is at -6.5, so we may have value on Notre Dame this weekend (the rating does not account for everything, such as travel situations, matchup advantages, etc.).

Before we begin, I would like to formally invite you to tell me why I’m wrong in the comments/on Twitter (@JackMacCFB).

As it has been all season, it’s Alabama and then everybody else.

Ian Book completely transforms Notre Dame. Are they at Alabama’s level? No, but if they escape this weekend @ Virginia Tech with a victory, they may be CFP bound.

We’ll learn a lot about Oklahoma and Auburn this weekend. Penn State had every opportunity to beat Ohio State. Washington is waiting for chaos to bounce of a potential CFP spot.

I wish we could just plop UCF in the ACC for the rest of the year and see how they do.

West Virginia will most likely enter November 7-0. Can they survive this stretch?!

Even with losses, Stanford, Oregon, Oklahoma State, Wisconsin, Miami, and TCU are all top-20 teams in my mind.

Kentucky-Texas A&M is the game I’m most excited for this weekend.

Can Texas cement themselves as back with a victory over Oklahoma?! 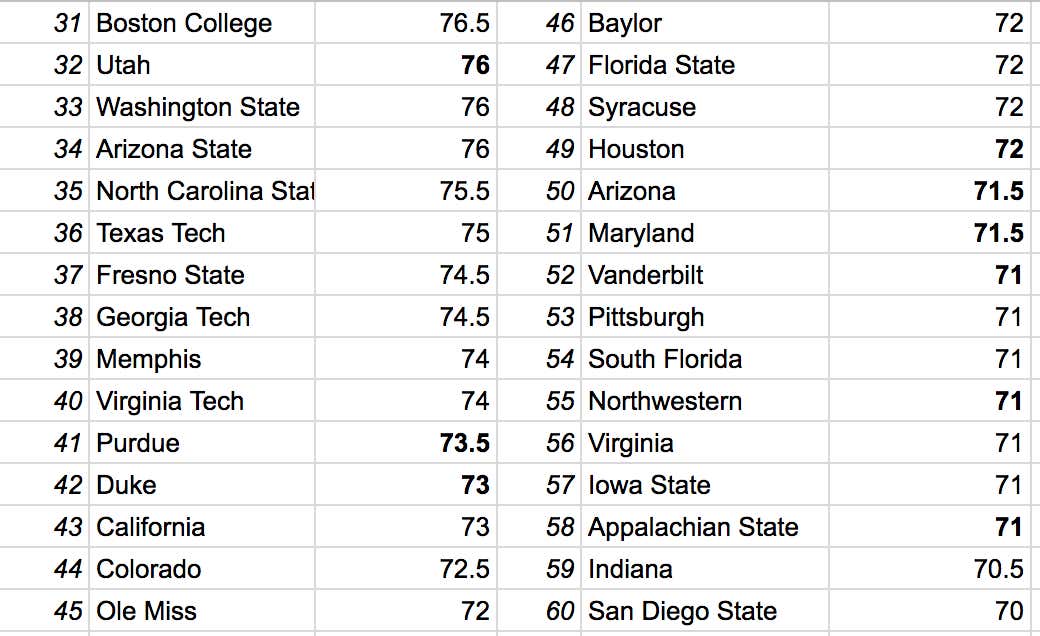 If NC State can take down Boston College this weekend, they’ll have a bye before taking on Clemson. The Wolf Pack could give Clemson’s shaky secondary an issue.

It’s a shame we can’t have a G5 playoff. UCF-Boise State-Fresno State-(Insert best MAC/Sun Belt/CUSA team) would be a lot of fun early in December.

Colorado is a lot better than I expected, same with Maryland and Virginia. 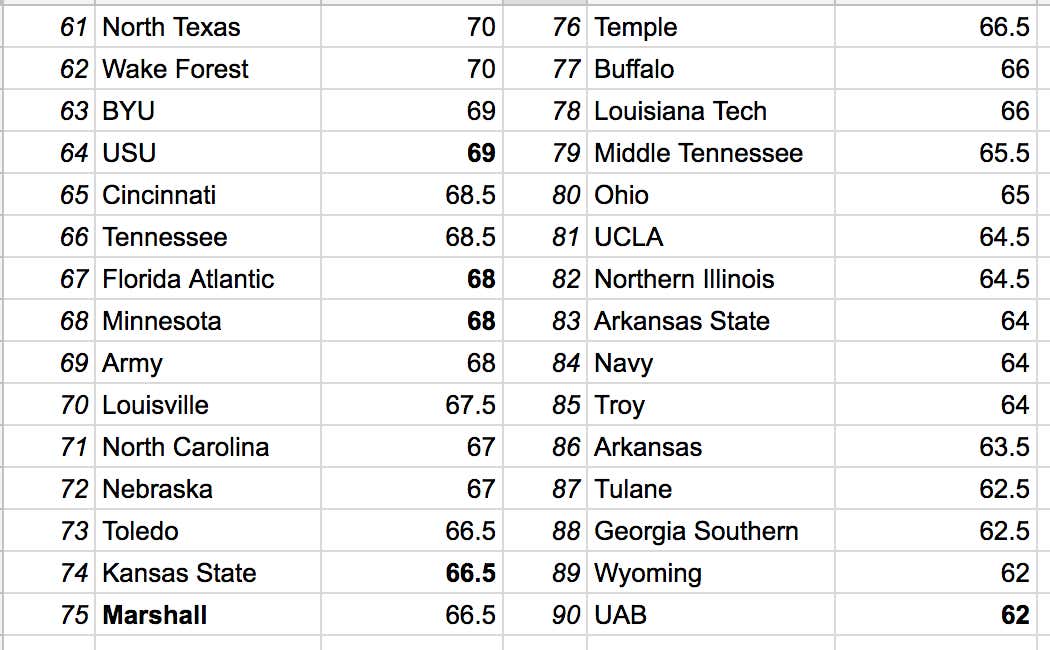 Utah State-BYU will be a fun Friday night snack.

Tennessee showed some signs of life against Georgia.

Navy better watch out, because Army is looking to take over as the premier football service academy. 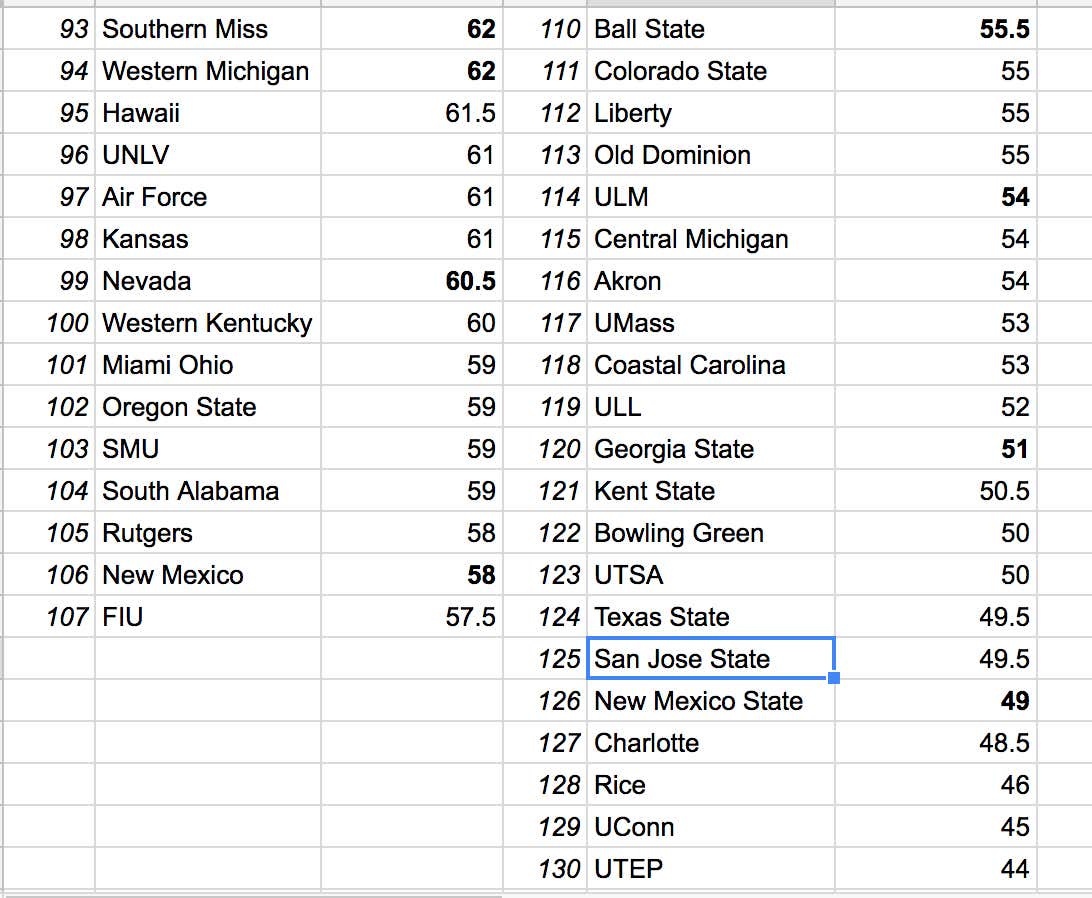 Could UConn overtake UTEP as the worst team in America by the end of the season?! It’s possible.

Buttgers-Illinois is the buttiest game of the week. Illinois is favored by 6 points…on the road. What a time to be alive.

Hawaii-Wyoming should be a good midnight game on Saturday night.

There should be a relegation bowl every year. The bottom 2 P5 teams and bottom 2 G5 teams play in early December. The P5 loser goes to G5 and the G5 loser goes to FCS. The FCS champion takes their spot, while the winner of the G5 playoff moves up to the P5. BRILLIANT.