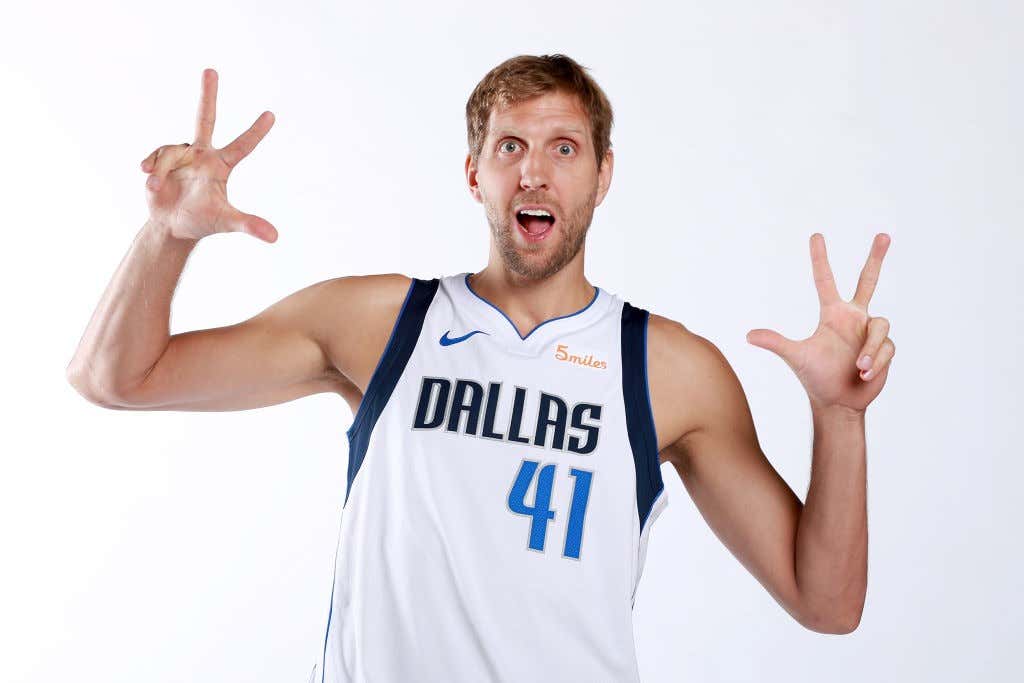 I’ve said it before, the bottom of the league teams need love too in this preview series, and I’m actually happy the stoolies went with the Mavs for today’s blog. Partly because I think DAL is going to be much improved from last year, and also because the closer you look at their roster, there is a lot to be excited about for Mavs fans. Obviously there’s also the emotional pull of what should be Dirk’s last season (plz no) so there’s a lot going on this year in Dallas as they attempt to not only make the playoffs, but actually advance past the first round for the first time since they won the title in 2011. Of course, before we get into what to expect, we first should relive the best moments from the 2017 season

If last year was all about Dennis Smith Jr busting onto the NBA scene, well the same can be said for Luka Doncic. I think every basketball fan on the planet is excited to see him play, and after his 16/6/2/3 with 71/75% splits in their preseason opener it’s obviously with good reason. Also, it looks like he’s translating to NBA life just fine

Now that they have another potential franchise player on the roster, the Mavs have all of the sudden injected a shit ton of talent into this team over the last few years. As it stands now, here’s what their full roster looks like 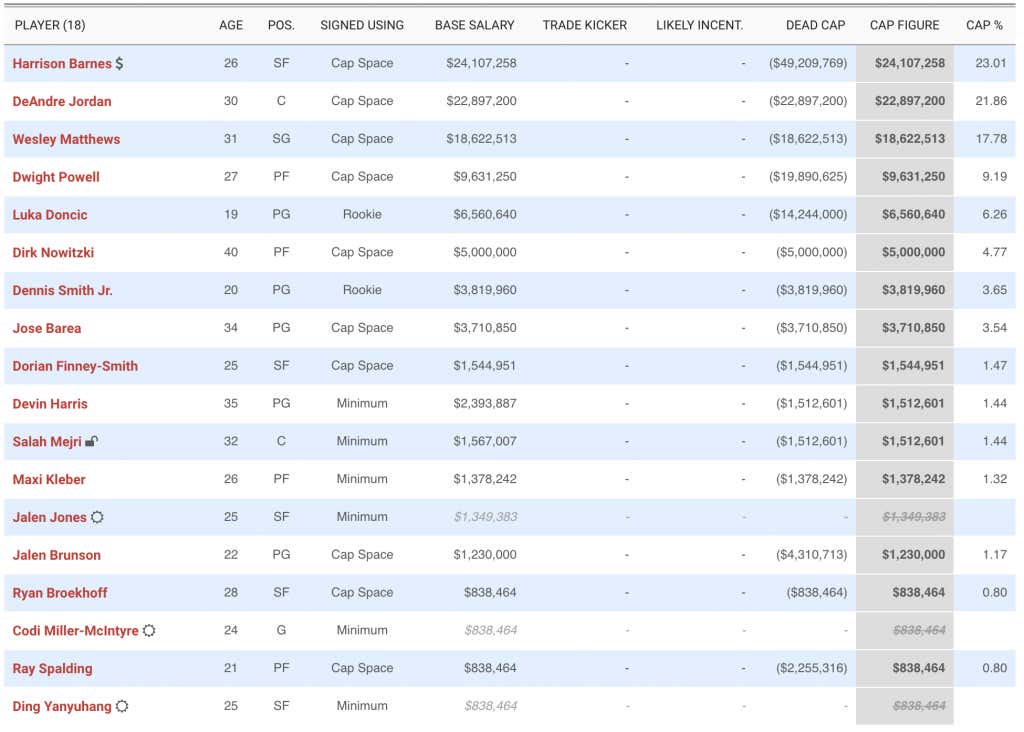 A total of $104,755,945, the Mavs are the owners of the 27th most expensive roster in the league. Only PHI/LAL/SAC have lower payrolls at the moment. That’s good news because it means they have a bit of room before the luxury tax kicks in (18M) but here’s the thing. The Mavs have the oldest roster in the NBA. Of course Dirk plays a huge role in that number seeing as how he’s 40, but other main rotation players like Barea, Jordan, Matthews, Harris etc certainly aren’t all that young. Normally when you have a payroll this low you either are comprised of mostly rookie deals/vet minimum deals so the Mavs are a little different in that regard. They are in this weird rebuilding phase while also having slightly older players. It’s an interesting strategy but really the only thing that matters here is DSJ/Doncic/Barnes. They are the future and young as shit while also being really fucking good at basketball so it wouldn’t surprise me if the Mavs don’t have a super long rebuild once they have to exist without Dirk.

Now when you look at this roster obviously there’s some change. Nerlens Noel, Seth Curry, Yogi Ferrell, Dougie McBuckets, they’re all out. The biggest part of their summer outside of the Donic trade was clearly Mark Cuban FINALLY getting his white whale in DeAndre Jordan. It feels like Cuban has wanted him forever, and I cannot stress how important he is going to be for the Mavs. This was a team that ranked 27th in rebounding last year and 29th in blocked shots. I like Dwight Powell as a player, but he is not the anchor to your defense. Well what are the exact things Jordan does? He rebounds and blocks shots at an elite level. The Mavs were already a team that did a decent job at limiting opponents points in the paint (5th fewest), and they just added perhaps the best true rim protector in the league. Safe to say we should see them elevate their interior defense to the PHI/UTA levels, which were the best in the NBA. Why is this important? Well when you are relying on these young players, there are times where offensively you are going to struggle. The Mavs had a decent defense last year, finishing 12th in opponents points and 18th in Drtg. Having this defensive anchor in Jordan is going to allow them to maybe cover some of their offensive stretches where things stall a little bit. Add in the fact that they are playing in the West with all that talent, upgrading their defense is going to be important, which Jordan does.

The great thing about DeAndre Jordan as a player is you know exactly what you are getting. Unfortunately, the same can’t be said for other members of the Mavs, and it’s their development and production that will have a lot to do with how this team looks. I’ll start with Wesley Matthews. Matthews is in the last year of his 4/70M deal, and while he’s a serviceable player and has played on average 71 games since becoming a Mav and returning from his achilles injury. That’s the good news. The bad news is, he is yet to return to that player we saw back in 2013-15 when he was with POR. He’s still getting the same FGA at around 11-12 a night, but the production hasn’t been there. As a Mav, he’s shooting 39/36% which is a big drop from his 43/39% splits as a Blazer, and as a result his scoring is down nearly 3 full points. He was supposed to be that big, athletic, alternative scoring threat that plays next to Barnes, but so far that hasn’t been the case. I will say, last year in his 63 games he did show signs that maybe things were turning around as he had 40/38% splits, but for me he is a crucial piece to this whole puzzle. This team looks a whole lot different with a POR version of Matthews mixed in with Barnes and the Doncic/DSJ pairing. This is why achilles injuries suck so much, because not only do they take forever to recover from, but once you’re back it seems to take a few years before you get back to being the same type of player. What does that mean for Matthews? Well for starters he needs to be better scoring off screens. He shot just 35% off screens last year and they ran that set 17.9% of his possessions. That’s basically as often as Steph Curry is run off screens incase you were curious. Now because of the talent and offensive approach of this team, he also got a shit ton of spot up looks as well. Those weren’t all that better because he shot 37.7% in those situations. If I’m Dallas, the struggles of both Matthews and Barnes in Spot Up situations is a little concerning.

Which brings me to Harrison Barnes. Is he a true #1 option? I don’t think so, but he’s certainly being paid as one. The difference between him and Matthews though is that since Barnes came over, he’s been pretty solid. A 19 point per game scorer with decent 45/35% splits, ideally he’s probably a #2 or #3, but the Mavs are banking on his development. I’d like to see him take a leap this year by focusing on his strengths. For example, RUN THIS DUDE IN THE PICK AND ROLL. He ran it just 10% of the time, yet outside of Dirk was their best scorer out of this set with 0.95 points per possession. He also shot 46.2% which is drastically better than DSJ who ran it legit 3x as often (30%). Maybe cut that in half and give the other half to Barnes, because thinking he is going to be this legit spot up shooter, or great shooter off screens isn’t his game. Let him use his athleticism to score and he showed promise in the P&R. To be honest, I would credit his improvement in the P&R as a main reason for his recent success. Please Carlisle, don’t overthink this.

But of course, the majority of my excitement with this team revolves around DSJ/Doncic. I’m just so intrigued with all the different ways Carlisle will use Doncic, whether it’s at the point, or on the wing, or shit even at the four in small ball lineups. As a reminder of what’s in store, this was his debut for those who missed it

Yup, he’s awesome. While there will obviously be some rough stretches, I think it’s really going to benefit Doncic that he’s already been playing pro basketball for so long. I know that’s not exactly a hot take, but it’s not like playing against grown ass men is going to be all that different. The NBA schedule will be a grind for him of course just like it is all rookies, but it feels like he has a head start doesn’t it? I know Carlisle can be a tough coach to play for, but I hope he has a long leash with Luka.

For Dennis Smith Jr, the biggest thing for him is going to be his efficiency. We all know he can dunk with the best of him, but whether or not he truly makes a jump is if he can figure out his jump shot. His 39/31% splits as a rookie weren’t terrible, but if he wants to drive as much as we know he does, he has to make the defense respect his jumper. When you look at his production from last year, he did cross many of the boxes off that you want your PG to achieve. He had a ridiculous 28.9% usage rate last year, and I couldn’t be mad at his 29.5% AST% and his 15% TOV. If he figures out a way to cut those turnovers down, maybe to something like 10%, well holy shit now he’s in rare company in terms of the point guard position. You look at the best guards in the league and they live in that 30/10% range. You obviously can’t rely on it, but his shot did look much better in their only preseason game, so it wouldn’t shock me if he was living in the mid 40s this year. That’s going to make a huge difference for a team that is going to be looking for other options outside of Dirk/Barnes.

Look this year isn’t about wins if you’re DAL. At least for me it isn’t. It’s all about enjoying the shit out of Dirk and watching the young guys progress. If things get super crazy and they somehow sneak into the 8th seed or something, great. If not and they end up adding another lottery talent to this young core, that’s great too. All I know is the Mavs are definitely going to be a regular in my League Pass rotations, and I suggest you make the same decision. The wins may be few and far between, but there are going to be loads and loads of highlights that any basketball fan will enjoy.