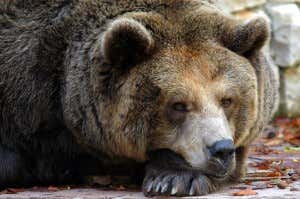 Body fat means strong chances of winter survival for brown bears, and October is the month that Katmai’s bears are heaviest. This is your chance to “weigh-in” and decide which bulky brute deserves the title of Fattest Bear. There’s no fat shaming here; we’re celebrating the survival of Katmai’s most successful bears.

Beginning Wednesday, we’ll post dueling pictures of bears commonly seen on the Bear Cam. These photos will show the same bear in early summer and fall to illustrate the bears’ relative weight gain during the summer.

Today, “Fat Bear Week” begins. Apparently Katmai National Park in King Salmon, Alaska (yes, that’s actually the town name) hosts a competition to determine who the best “fat” bear is. The bears are fattening up for hibernation, and the rangers make it very clear that they are not “fat-shaming” the bears, as it is vital to their survival to get thicc for the winter.

The bear whose photo receives the most likes will advance to the next round, until one bear is crowned “Fattest Bear” on Fat Bear Tuesday, October 9th.

Notable competitors this year include bear 747, whose belly barely makes clearance with the ground. He faces strong competition of 435 Holly who not only has to feed herself, but as the mother of two cubs, also has other mouths to fill. In order to achieve the crown, however, they will have to displace reigning Fattest Bear and previous champion 480 Otis.

You can fill out a bracket here or vote daily on the park’s facebook page, where they will be posting pictures of two bears at a time, starting today, and the winner of the matchup will be determined by whose picture has the most likes.