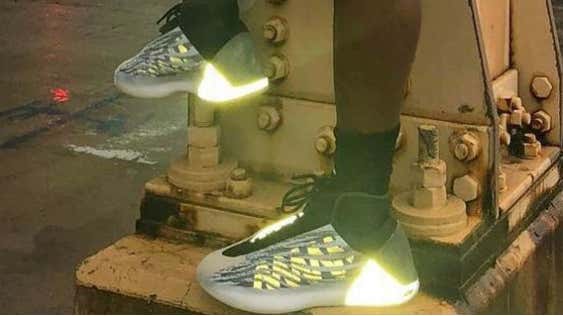 [ESPN] – Kanye West is expected to debut his first-ever Yeezy basketball sneaker on the feet of Adidas athletes during the upcoming NBA season. But the league office would ban the current version of the sneaker on-court because of its gleaming, reflective material heel, according to industry sources.

While the monochromatic sneakers won’t violate the league’s footwear color restrictions, the issue is the reflective “3M” heel panel, which the NBA would find potentially distracting for both in-arena spectators and television viewers.

Well, I have to say when I first saw this I thought it was going to be a completely different reason at first. This is in no way the first time we’ve seen the NBA ban a shoe for something like this before and it makes some sense. Now, why is this important?

Well, it’s Kanye so people care (pageviews). But, also the fact that this is the first year that players can wear shoes that don’t match their uniforms. It’s huge for guys with signature shoes and also those who want to just be different with their shoe game. Say what you want, but it’s something.

But, as a fan? I mean this is nice. I’d prefer to watch games without a distraction considering there are a million distractions already. I’m simple. Just adjust the heel and then let’s get cooking. Give me Kelly Oubre out there in a pair of Yeezy’s.