The comment section/twitter/internet doesn’t like me right now because of my political blog last week. Hand up: this upsets me. I see their words. Their words affect me. I’m a very sensitive guy. Thinnest skin in the league. All my colleagues at Barstool say “don’t pay any attention to them.” But I can’t help myself. Why? Because 99% of the time, they’re sucking the ever-loving nectar out of my cock. They drain my testicles until they look like an empty Capri Sun that’s been vacuum-sealed. They’re like a pack of hummingbirds, buzzing and hovering around my feeding tube. They make me feel like a chick on her birthday: 1 instagram post and 4,000 comments from every girl she knows saying “you’re my everything.” They make me feel like God, and they are my children. I love it. I crave it. I spend my days walking around with a pant full of rock-hard bone, providing them a squirt of vitamins and nutrients whenever they ask.

Starting to get the picture? No? Let’s keep going. Because I got REALLY hot from January-May!

From 4/18 (this one written by Francisspubes. You can’t make this shit up. Dude is literally taking it down to the pubes) 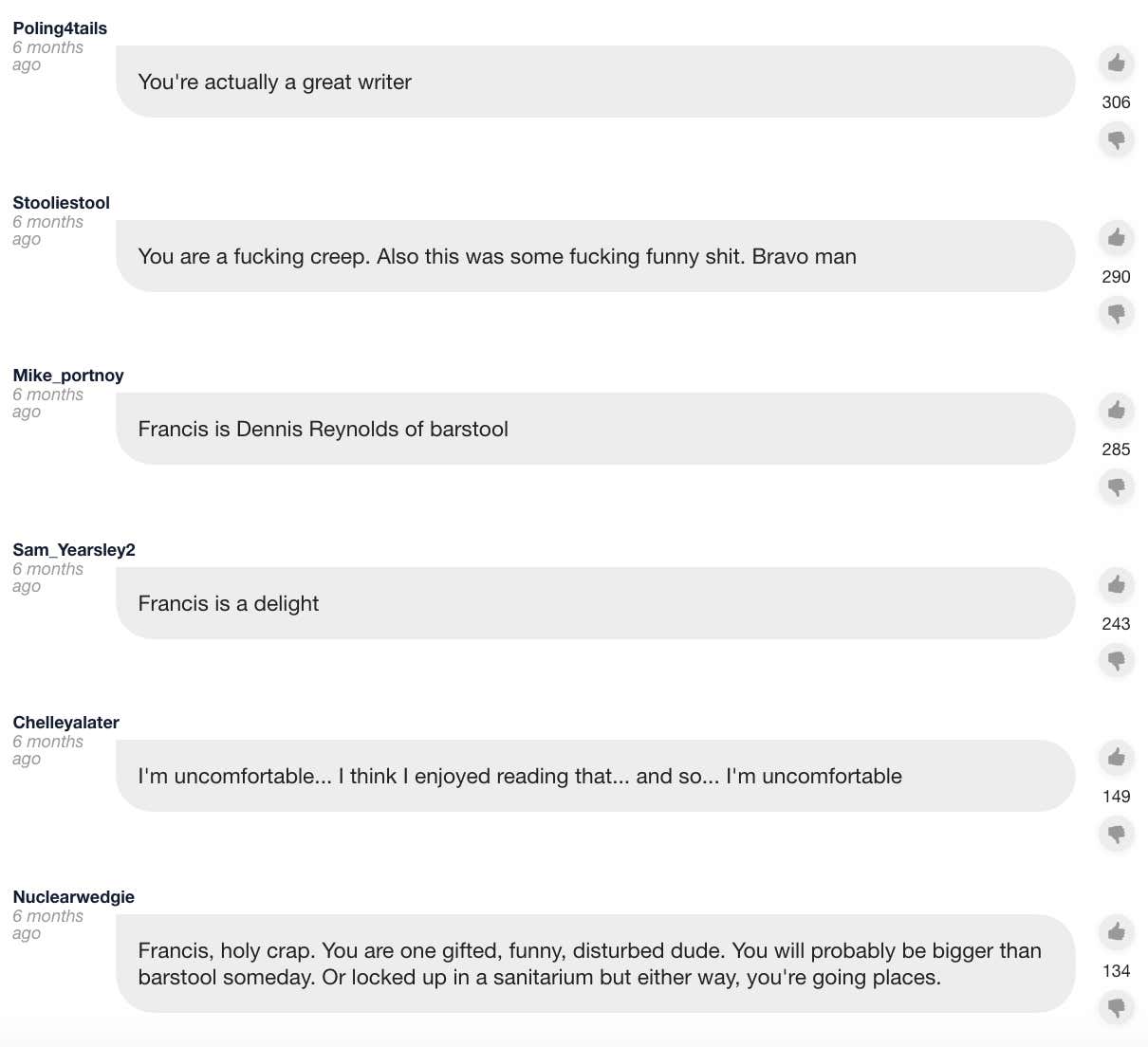 I’ll stop there because this is actually making my dick hurt. I keep nuttin’ but they keep suckin’. But when you see this constant, non-stop barrage of compliments, you realize I don’t have a choice: I HAVE to read the comments. Who wouldn’t? It’s a goddam support group. It’s my own personal fan club. I try to be a man of the people, so I read their little fan letters. It makes me feel all warm and tingly inside.

Every few months, I do something the commenters don’t like. I once tweeted a tasteless, regrettable joke about Frank’s weight. Unsurprisingly, the comment section is VERY sensitive about fat jokes. Took it very personally. Lost them for a week or so, but then they hopped right back on the dick. Another time, I wrote a quick history of the Arab-Israeli conflict. Boy, did they hate that! They pouted and stomped their feet, swore they’d never read another blog of mine again. But that time, it only took a day (lol) before they were slurring my praises through a mouthful of franjaculate. Last week, it was the Kavanaugh hearing. They whined and moaned, said my stock was tumbling, swore they’d never read a blog of mine again…

Based on these episodes, one can only surmise that the comment section is comprised of overweight Israelis who hate sexual assault allegations. Noted! I’m writing a Zionist, body-positive rape fantasy as we speak, just for you guys. Don’t say I never did anything for ya! My dick will see you again on… Thursday? I’ll call Stu and we’ll set a line.

Same shit happens to Dave every so often. They say he’s lost his fastball, they don’t like him anymore, blah blah blah. He wrote a blog once that said similar shit to what I’m saying here– like Vince McMahon, he knows what the people want more than they do. Knew they’d be back, nothing to worry about, steady as she goes. It was a valuable lesson from my dear friend.

Honestly, I’m not here to shame them. They can’t help themselves. My work is too spectacular. Their words, not mine. So I’m here to extend an olive branch: I’ll continue to provide spectacular content for as long as I’m working at Barstool. In exchange, I simply ask that you guys get back to blowing me because I like it and so do you. The quicker you get over it, the quicker we can get back to our happy arrangement. Sound good, babes?