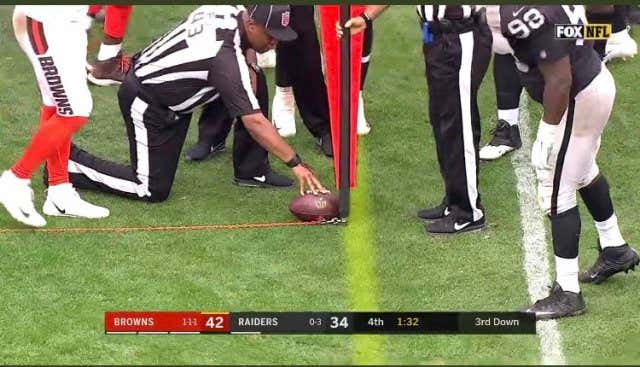 We are the Cleveland Browns. We’re pretty damn good at losing football games on our own. But when you have to beat another NFL team AND the referees on top of that, it becomes nearly impossible to win. And before anyone gets too mouthy that its not the refs fault and that this loss has anything to do with the way the Browns pissed down their leg after being up 28-14, save it. We played bad, yes. We made tons of mistakes But we won the football game. There’s a huge difference between blaming the game on the refs and having the refs steal the game right out from under you. With 1 minute and 32 seconds left in the 4th, the Browns rushed for a 1st down that would have ended the game. They could have kneeled it out. It looked like a 1st down from the get go. They brought out the chains to double check. Still a 1st down. They go to replay to double check. Everyone and their mother decided it was a first down. The broadcasters in the booth were packing their belongings. The fans were halfway back to their houses. And then, out of nowhere, the replay booth decided that they had conclusive evidence that not one other person in the world has, that shows that Carlos Hyde was short of the first down marker.

Not only were the broadcasters, Browns, Raiders, fans, and even God (yes, he’s watching too you lying refs and he knows what you did) all shocked at the overturn, even Fox’s rules analyst Dean Blandino couldn’t believe what he just saw.

“I think we’re all looking at this here in the studio and we’re shocked that they overturned it,” Blandino said on FOX’s game broadcast. “Again, you don’t have a big line (on the review), it’s tough to tell exactly where the ball is. I wouldn’t have overturned that one.”

So you’re telling me that the replay booth doesn’t even have the big yellow line to help them, meaning they say this angle and had enough evidence to show he was short?

And unfortunately, this may not have even been the worst call of the day! How about when Myles Garrett almost started to almost breathe on the quarterback, so they called his forward progress stopped? Well, when Garrett actually touched him, the ball came loose and the Browns were off to the races for a touchdown.

And that’s coming from Herbstreit! The most unbiased person in Ohio that he’s almost biased against Ohio. I mean, how do refs make on average $200,000 a year to be completely clueless? But I guess I can almost live with this one. They were trying to protect the quarterback. It was an embarrassingly bad call due to an embarrassingly bad rule. But I see their intent, I guess. It was a judgement call that was on a split seconds notice. But do you know what wasn’t on a split seconds notice? The game ending first down that the referee called BW3s and asked if they wanted to see overtime! 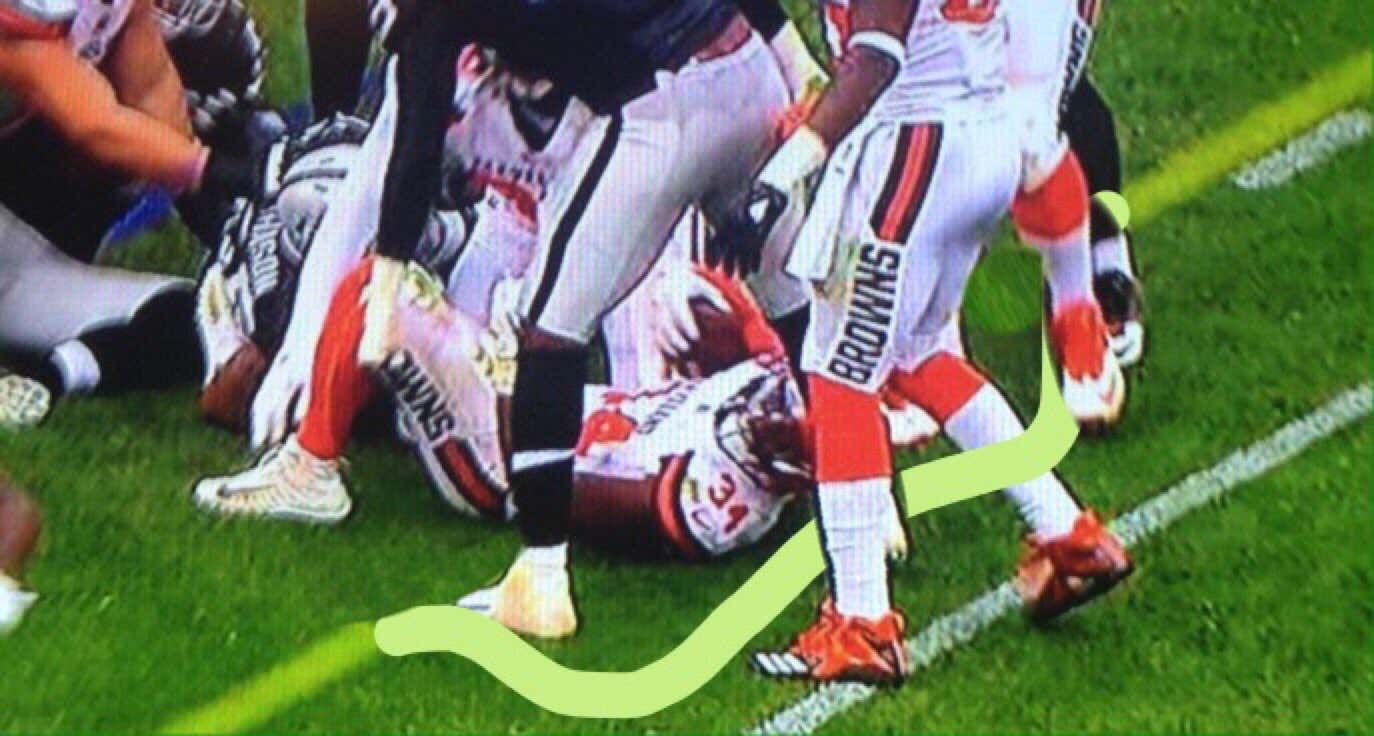 Again, there’s many things we did wrong in this football game. Baker turned the ball over 4 times. Our wide receiving corps dropped TWELVE passes. Is Dez Bryant still looking for a job? Look, our mistakes yesterday were inexcusable and I would be the first one to put my hand up and say we deserved a loss had this 1st down run not happened. But the fact of the matter is that through all of the ups and downs of the game, the game was over and the referees took it away from us. Reminds me of the last time a Cleveland team won a game in Oakland only to have the referees decide that they would rather hand pick the winner of the game themselves.

Up 2 with 30 seconds left and the ball on the road in Game 1 of the NBA Finals? Shit, don’t get me started again. This isn’t about the Cavs. This is about the Cleveland Browns that has suffered for so long and now quite literally could be 4-0, but instead they fall to 1-2-1.

Browns are tied 21-21 with the Steelers and have a field goal blocked with 13 seconds remaining in Overtime. The Browns tie.

Browns kicker Zane Gonzalez missed 2 field goals and 2 extra points, including this one to take the lead with 1 minute to go. The Browns lose.

Baker Mayfield enters the game midway through the 2nd due to a Tyrod Taylor injury, and the Browns win their first game in over a year.

The Browns go up 28-14 and have the ball in the 3rd quarter, but an abundance of turnovers let the Raiders back in the game. They still win though, until the refs decide to reverse a call that would have ended the football game and let the Raiders have another try. The Browns lose.

I probably sound like such a sourpuss right now but if you’re truly watched all 4 Browns games then there is zero doubt in your mind that we should be undefeated. Instead we’re 1-2-1 in a division with two 3-1 teams, meaning we’re a loss to the Ravens this week away from another wasted year. How does this keep happening to us? Only in Cleveland.