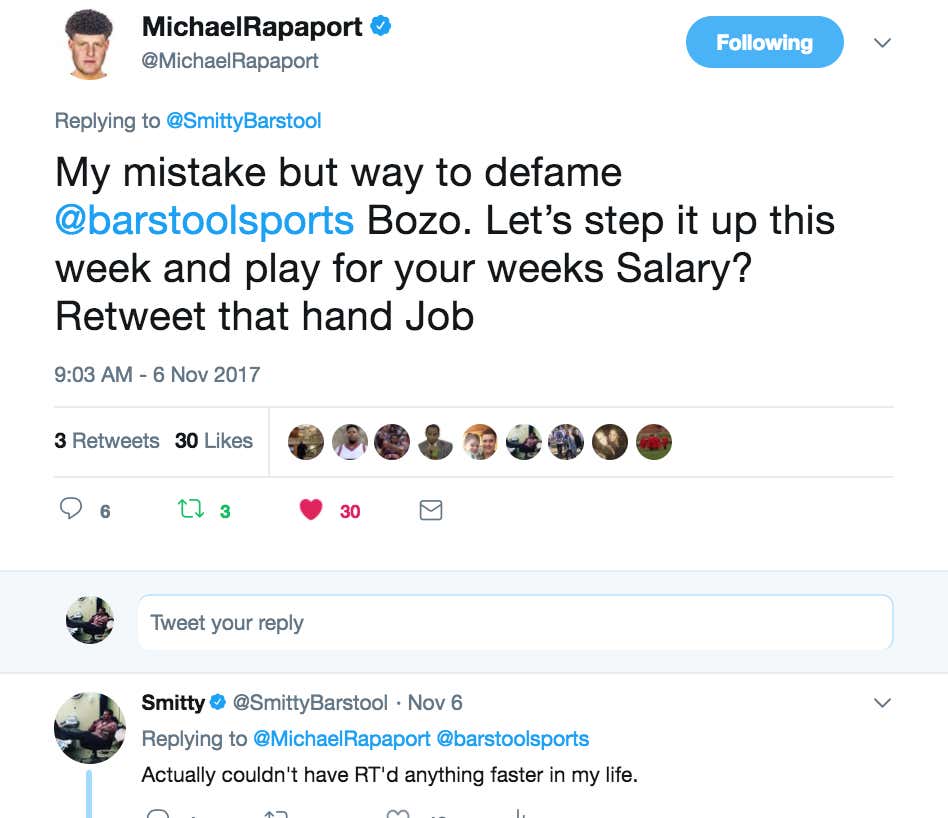 [Editor’s Note: This is solely a Clickbate Smits REBLOG in the defense of my main main, Smitty. That scumbag fraud of a cowardly hack Michael Rapaport cited this post from November 17, 2017 as evidence of defamation.

I just thought I’d make it easy for the courts and share it again. No digging around for evidence, no smokescreens. All facts. At noon of each day I will be releasing said facts for the courts. Michael Rapaport, like Dan Marino, should die of gonnorhea and rot in hell.]

I don’t know if you’ve been following this middle-school drama sparked and continued by “celebrity” Michael Rapaport, but here’s a quick summary of his fraudulence. Honestly, this entire ordeal has been exhausting. And on top of that, it’s not even that funny or entertaining. It’s draining dealing with someone of this hypocritical bullshit caliber. But I’m tired of his twists, turns, tales, and blatant lies. I can deal with a lot, ESPECIALLY being inaccurate. Hell, my entire existence is based on being wrong about everything. But one thing I can’t stand is my name (or family or job, just ask #NecrophiliaNate). People who blatantly think they’re better than anyone else, Or being a lying sack of shit. Michael Rapaport masters in all three in this tall tale of dickage. I could do a long rant video for clicks filled with an eclectic vocabulary full of “Fuck”, “Cracker”, and “Homeboy”, but instead I’ll just respond with a blog filled with actual, you know, facts.

Here’s a quick backstory. LONG story short, it all started when Michael Rapaport was upset when people aren’t “All In” on his Barstool Fantasy Football league, especially when it comes to the shit talk.

Yo, Phoebe. Take all the chill pills, please. There’s no need to be this angry. It’s difficult for anyone over the age of 13 to care this much about a Fantasy Football league when no money or punishments are on the line. Even more alarming, it’s INSANE to think complete strangers would care about your Fantasy Football league with no money or punishments on the line. But then again, I haven’t been in the comedy business for 25+ years and get cucked out of Fantasy Football podcasts, so I’ll go kindly go sit on my own fist.

Annnndddd Rap went on to chirp at my livelihood without context then proceeds takes a page out of the Spags’ Book of Psycho and responds by challenging a random Twitter dude to on the court for his cash and chick. Typical NY gabagoo stuff.

Relax, old man. We’re in a Fantasy Football league for respect. Oh, there’s a belt/trophy/ring that comes with it, too, but it’s all about respect. Yeah, there can be some subtle shit talk here and there during the regular season, and I don’t mind that one bit. But to literally blow your load every damn week is beyond exhausting.

Nevertheless, we decided to step it up a notch when it comes to playing eachother every week. Little daily fantasy head’s up games for $5 or so (his call). It wasn’t about the money, and still isn’t. It’s about respect. And I, naturally, wax him in the first 4 weeks, going 3-1 overall and outscoring him by 100 points:

I also overtook him in the regular, bullshit Barstool Fantasy League he always would Tweet about until he was no longer in 1st:

He responds by Tweeting out his one daily fantasy victory from the previous week, even though I won the current week:

Does any of this matter? Not really. Up until this point it’s just an entitled kid jawing his dick off and hurling personal insults at a motherfucking blogger over motherfucking’er fantasy football. Nbd. But then Rapaport raises the stakes, and oh they were raised:

Like I said, I couldn’t have RT’d that fast enough. And after more shit talk throughout the week, I sent over the invite for the $1K game on Sunday:

Annnnddddd Rap doesn’t bite. In fact, he backs out and his spot automatically gets filled with a DK shark, which put me in a pretty shit space.

The games played on, and ironically, he would’ve CRUSHED in the big game, as he won with the same lineups in smaller games against me. Fantasy Football has a lotta variance, folks. You ain’t gonna win every week. But not only did he puss out IN THE FUCKING GAME HE CHALLENGED, he said he’d PayPal $1K on the SPOT if I can prove I played in that specific game he backed out of last minute:

HJ or not, I happily obliged, instantly:

Did I get the money? Nope. All I got was excuses. And I honestly don’t give a FUCK about the $1K he threw out there. But a man is as only as good as his word, and Fradaport is a mute. Not only does he throw shit against the wall, he used all of his podcast time this week spinning the situation to his advantage.

The amount of real estate “Smithy” owns in this overactor’s head is Tycoon worthy. First off, do I talk to my good friend and former Barstool Fantasy Football Power Half Hour host about lineups and his thoughts? Abso-fucking-lutely. Why wouldn’t I? But it’s no different than what we did on our now deceased podcast. Or logging onto FantasyLabs.com, your one stop shop for all things fantasy sports. Everyone is privy to the information and mind on there. Shit, they even give you suggested lineups on their to use. If Rapaport can use his resources and his boy toy fantasy cohost Prison Mike, I can piss wherever I please.

Also, I NEVER bragged about my fantasy football winnings, but I play for the money, the honey, and all the marbles. I, unlike some frauds, didn’t just stumble upon Fantasy Football two years ago. I HOSTED A GODDAMN FANTASY FOOTBALL PODCAST FOR OVER 3 YEARS. I do ‘aight. I HATE doing this, but to clear these accusations I will put out there I usually play $2K+ of lineups every football week over a variety of low-level stakes. Wanna see, shitbeak? Here’s last week’s (albeit, awful) efforts: 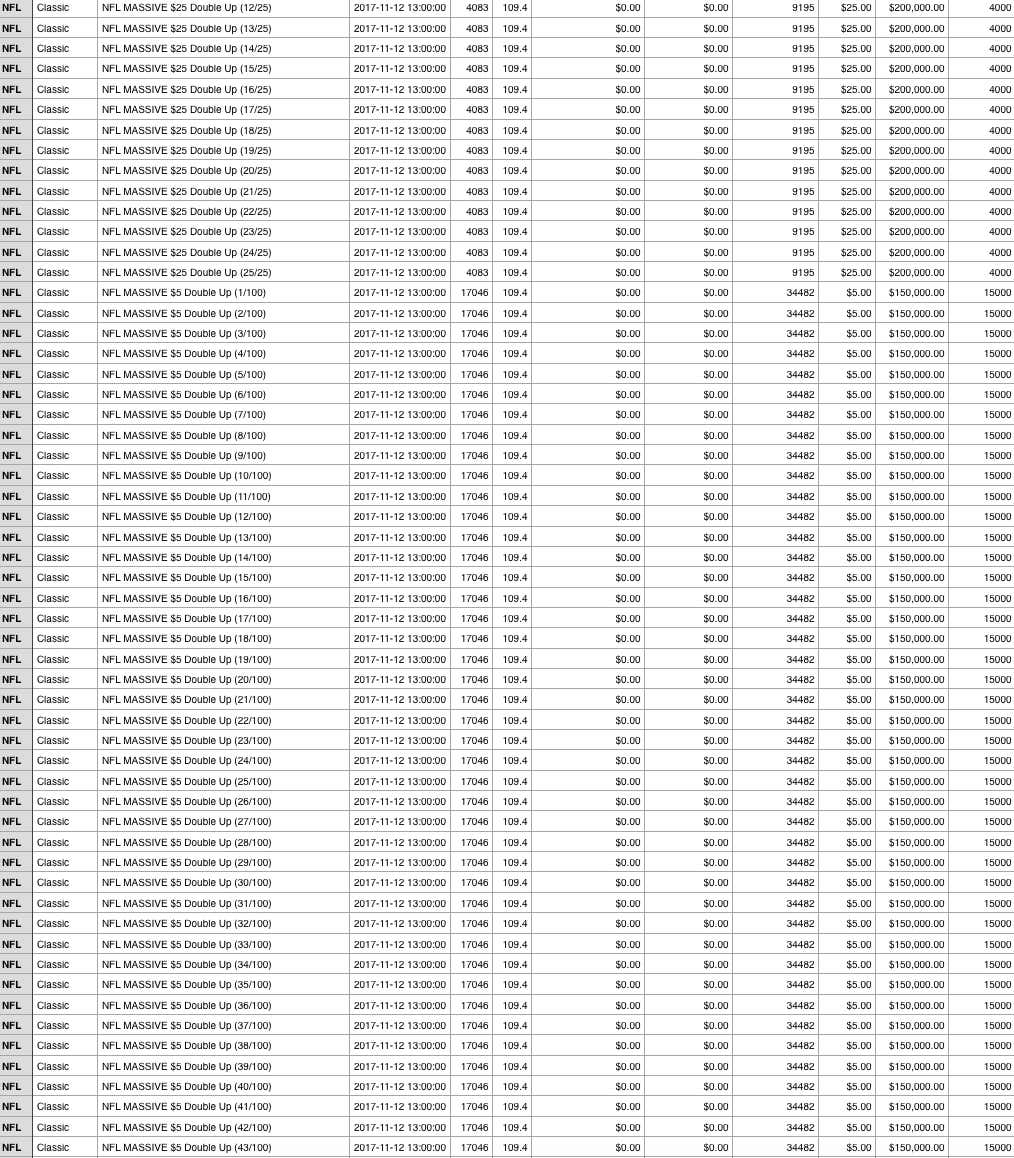 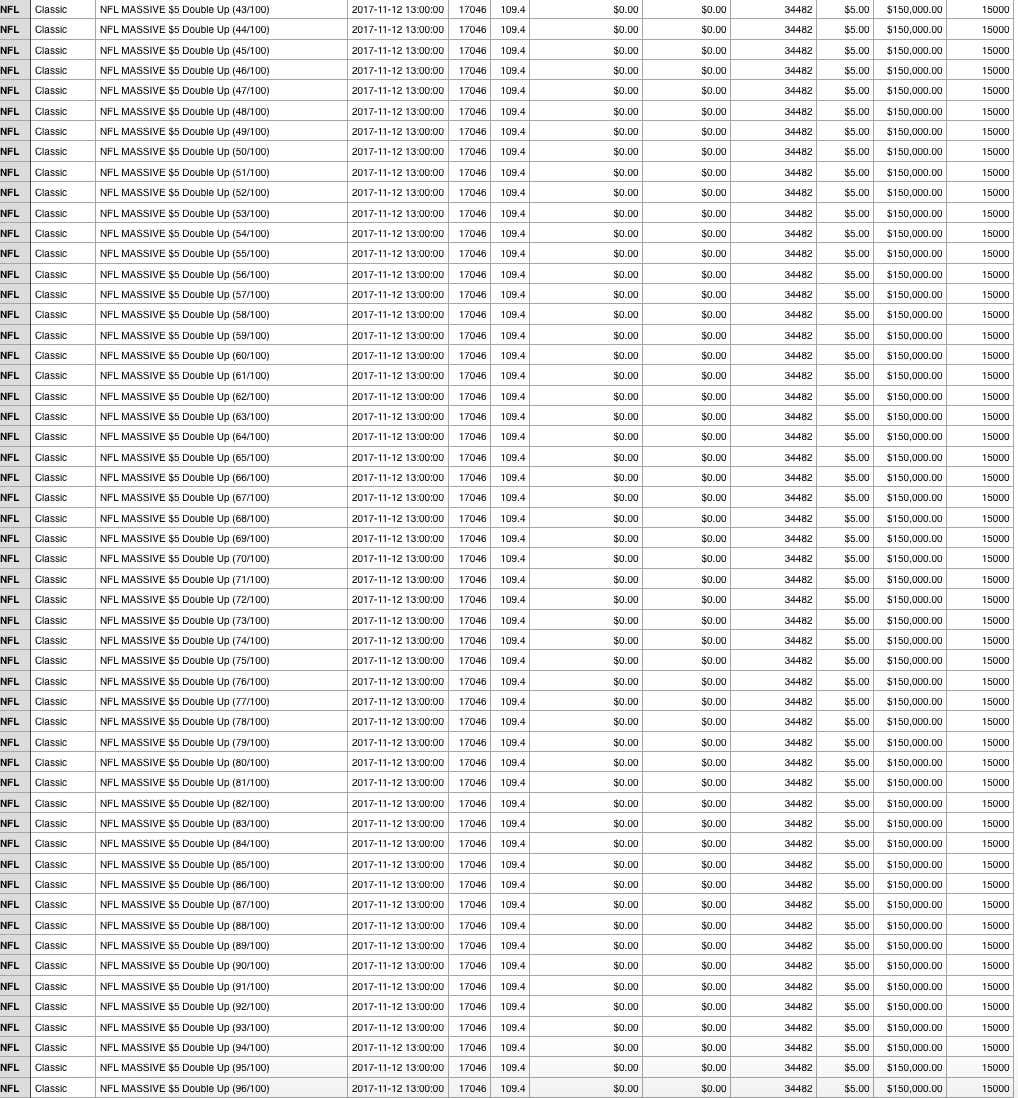 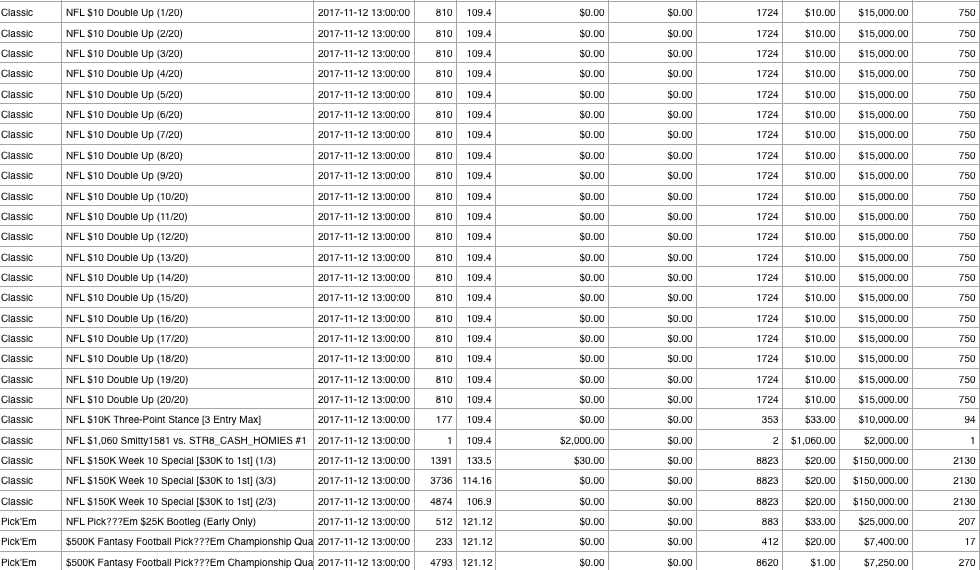 And I THANK Rapaport for pussying out of the challenge he initially made for $1K, cause it somewhat salvaged my week.

I get it. Rap’s the “Rant” guy. It’s his job that nobody asked him to do to call out anything and everything. But this is more than the game or money now. Why? Because it’s about fucking integrity. That’s why. I’m no cheater. I’m like John fucking Proctor in The Crucible (yeah, I read). This job has already taken my soul, at least leave me my name.

So, yeah, Mike. I’ll play for whatever you want. I’ll periscope my lineup live at midnight hour if need be. But the fact you called me a pussy, challenged me to a high stakes game, BACKED OUT LAST MINUTE WHERE I AUTOMATICALLY PLAYED A SHARK INSTEAD, said I never sent out the invite and stated you would PayPal me $2K on the SPOT if I screenshotted my lineup in that game, did not PayPal dick when I provided evidence, makes you, the bitch.