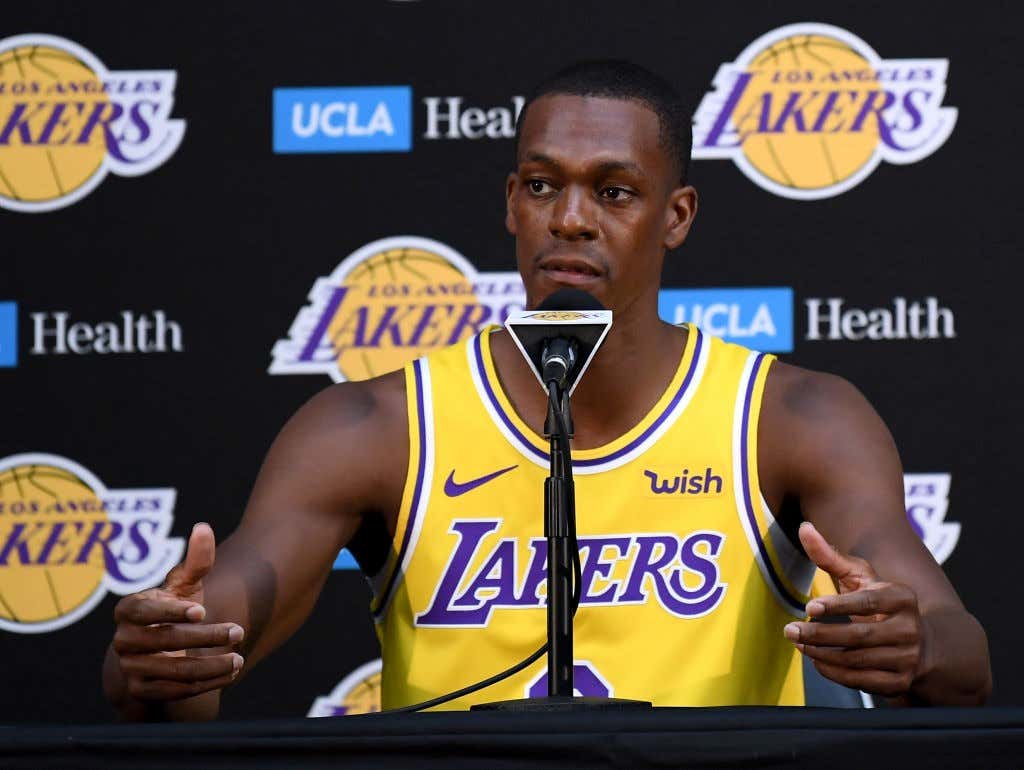 With Media Days kicking off we’re now getting our first look at some players rocking their new teams threads. For whatever reason, there are some players that it takes a little longer in getting used to seeing them in a different jersey. After digesting everything that went down yesterday I wanted to comprise a list of who I thought was the most weird looking. There are some that may be more weird to me for personal reasons, but I feel like this is a pretty accurate evaluation. In no particular order, here is where I netted out

I may as well get this out of the way early. We’ve seen Rondo rock a few different jerseys since his Boston days, but I’m sorry this just looks wrong. I had no problem seeing him in DAL, or SAC, or CHI, or NO, but this, this is downright offensive. I can honestly say that this is by far our most weird look of this entire blog and something I will never, ever get used to seeing 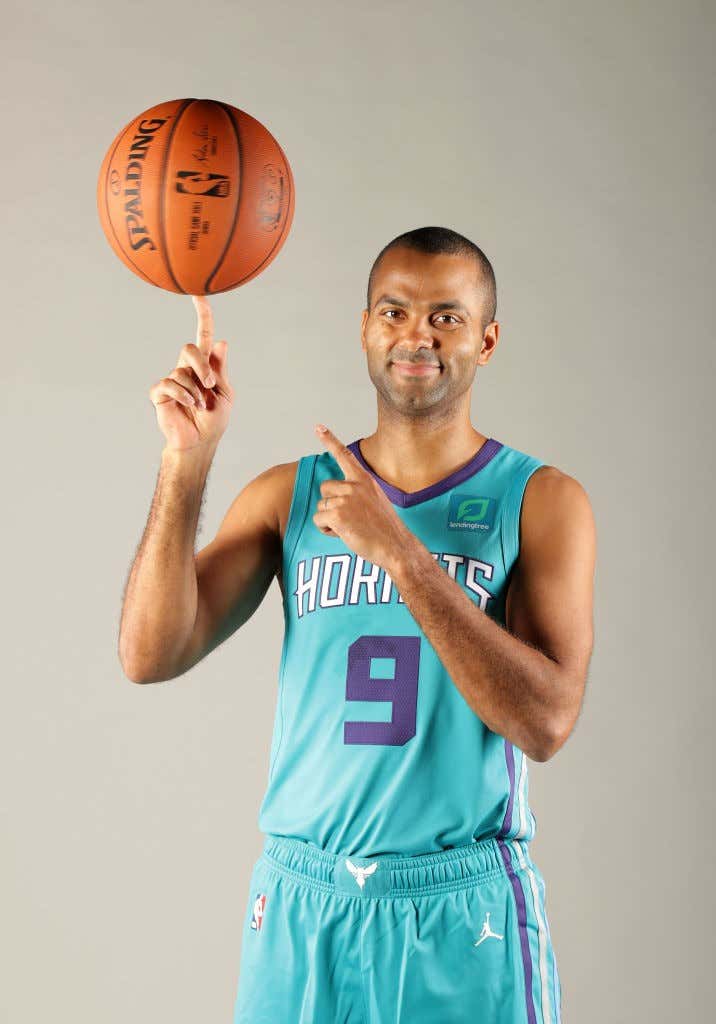 Sorry to kick you in the dick any Spurs fan that may be reading this blog, but man was this weird to see. Personally I thought we would see Parker retire before he ever rocked something that wasn’t silver and black, and honestly this truly feels like some random photoshop you see on Twitter. But the truth is this is in fact real, and this isn’t just a case where Parker is going to ride their bench either. We’re going to actually see him do Tony Parker things in this jersey which has to be torture for all the SA faithful out there 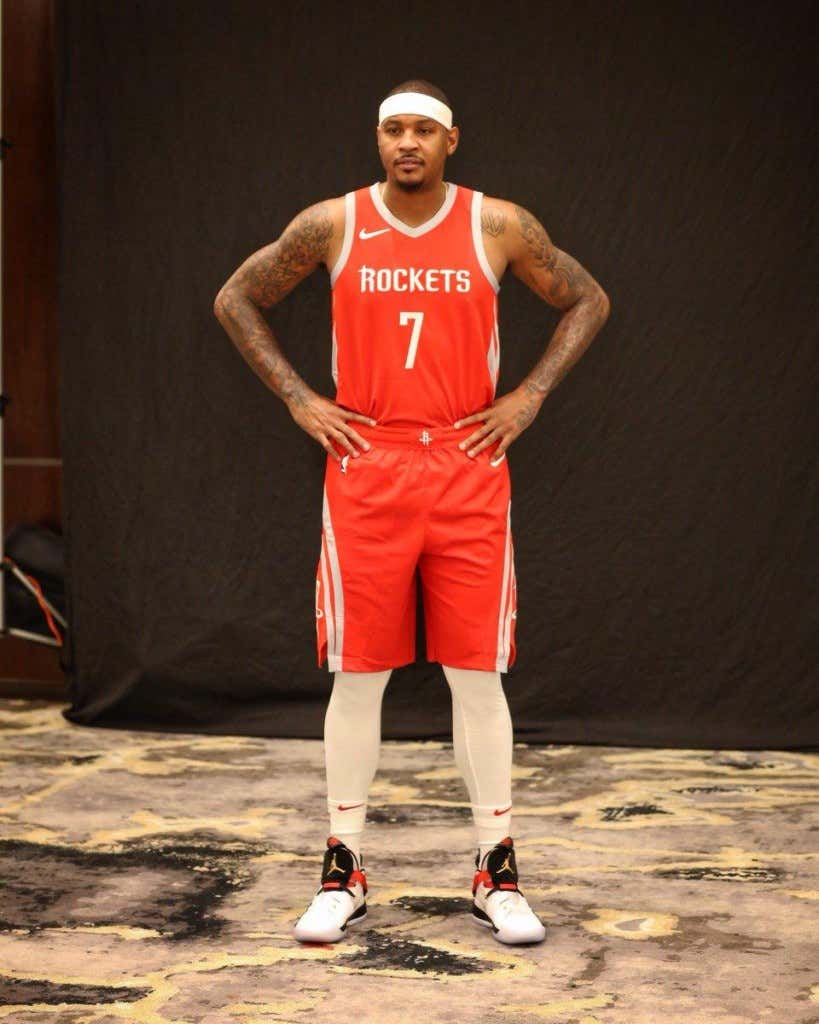 Maybe it’s because he’s been rumored to HOU in the past, but this actually wasn’t that weird to me. I will say the only weird part about this photo is that Melo sneaky looks in shape. I think this didn’t catch my brain off guard because I’m pretty sure we saw HOU do some photoshop work when they pitched him back in the day before he signed that NYK extension. It’s usually the ones out of the blue that look the strangest, and this didn’t really do that for me. 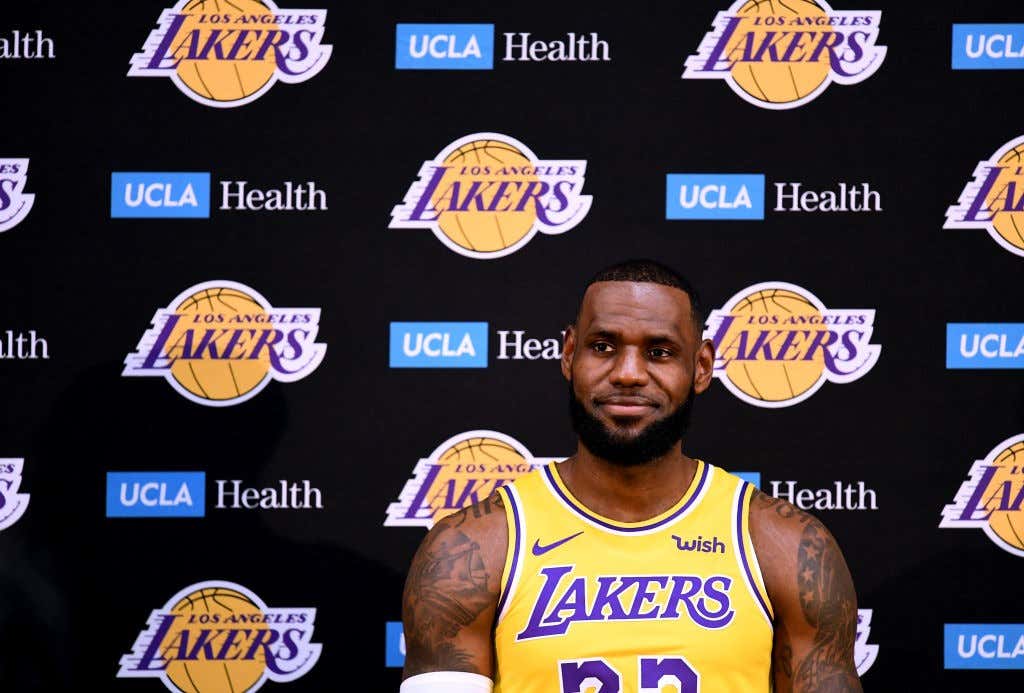 So LeBron is a little different. We all knew this was going to happen, so our brains should have been able to process what he would look like in a LAL uniform. We also have already seen him in these new Lakers digs, but even still when I saw his press conference today I couldn’t get over how weird it looked. This has nothing to do with my Laker hatred either like what I’m fighting through with Rondo. It was weird when we saw LeBron rock the MIA uniform for the first time, and this is another level above that in my opinion. It’s just crazy that this really happened, that’s all 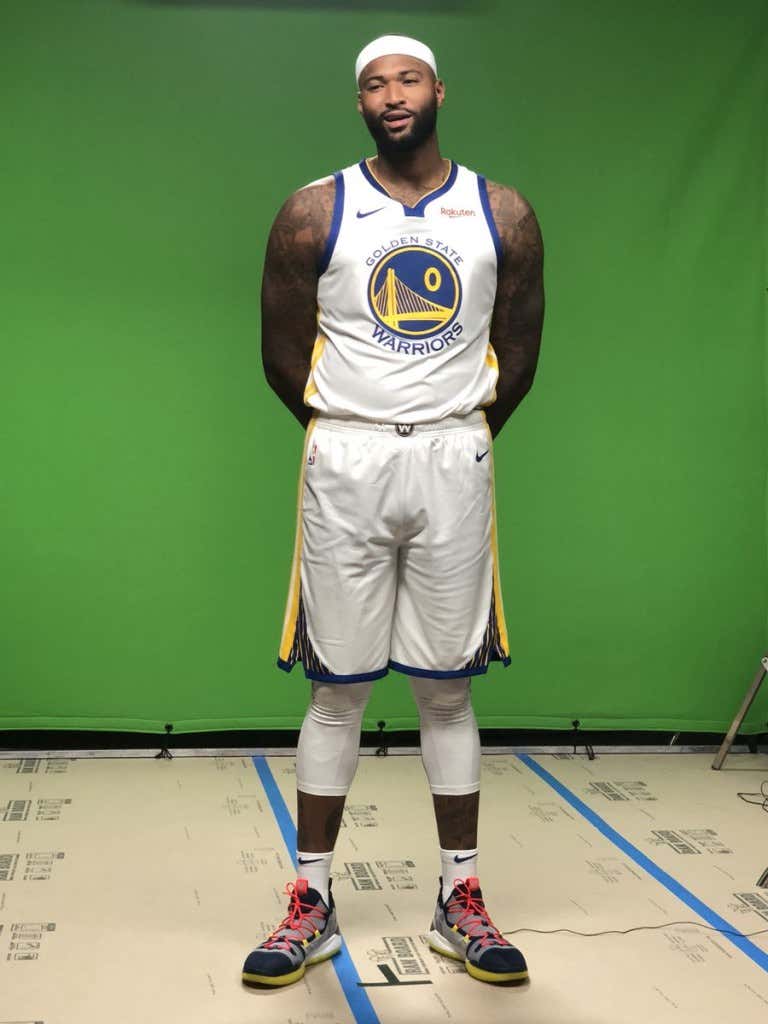 Another one that looks more like a fake fan Twitter photoshop than an actual real life photo. I know the second people see this picture they may be triggered online, but here’s the thing. Boogie actually doesn’t look that weird in this uniform. Maybe that’s just because everything GS touches seems to work, but of all the guys in this blog that are rocking new jerseys, this look for Boogie doesn’t seem all that strange. Maybe it’s because my brain is factoring in how we won’t see him play in it for a few more months, or that he won’t be wearing it again next season, but either way I found myself strangely OK with this 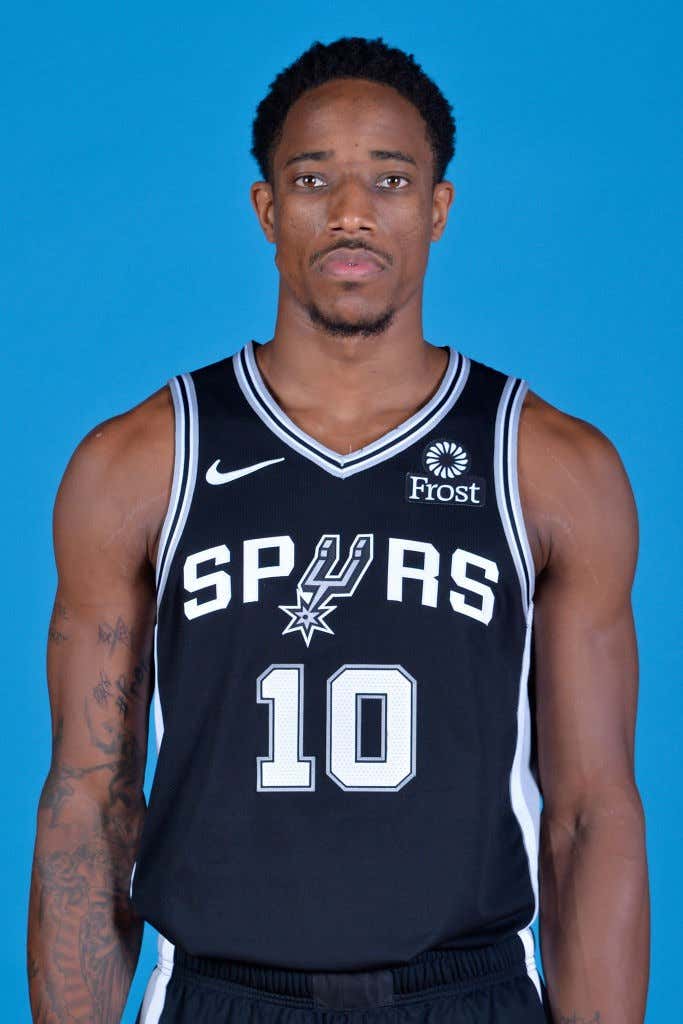 Now we’re getting back to the high level of weirdness. To be honest once DeRozan committed to TOR long term, I figured that was the only uniform we’d ever see him in. I don’t think anyone could predict he’d be traded for Kawhi, so I think that shock factor is playing a role in how my brain is viewing DeRozan. I will say unlike some others on this list, at least the silver and black fit him, and honestly in looking at that picture I feel like he’s been a Spur for 15 years already. Even still, definitely weird. 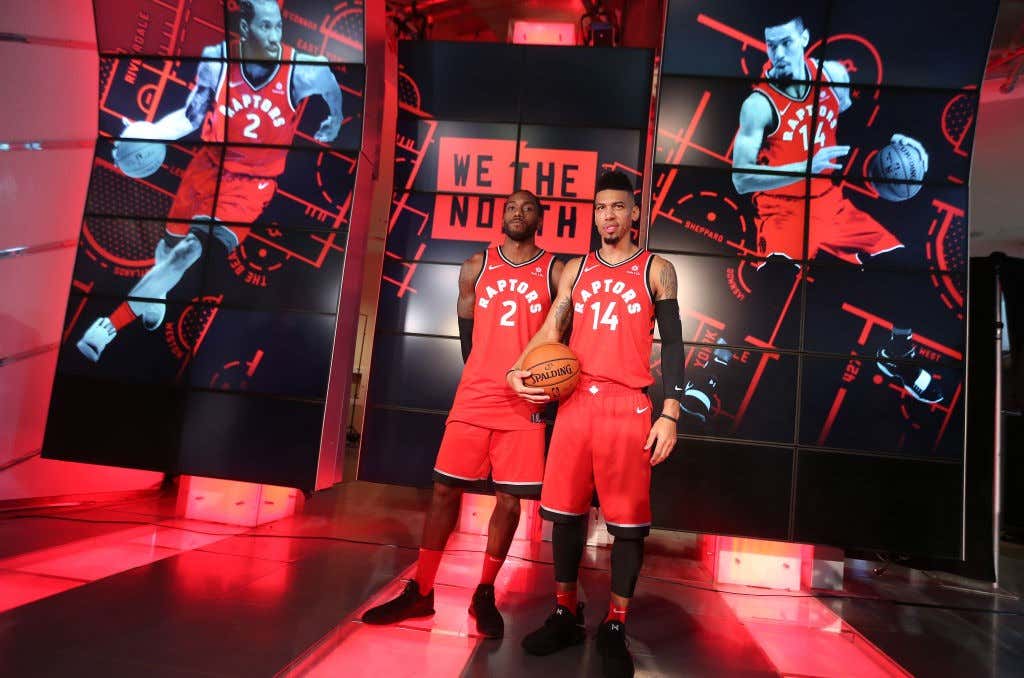 Which obviously brings us to Kawhi and Danny Green. If we’re being honest Green doesn’t look as weird as Kawhi for some reason. Maybe it’s because we’ve already seen Green play in a different uniform before. I’m confident in saying it’s going to take me a little while to get used to seeing Kawhi rock this all red look given I thought he would be a Spur for life, and I know Raptors fans are hoping it becomes the last jersey he ever wears. We’ll see. 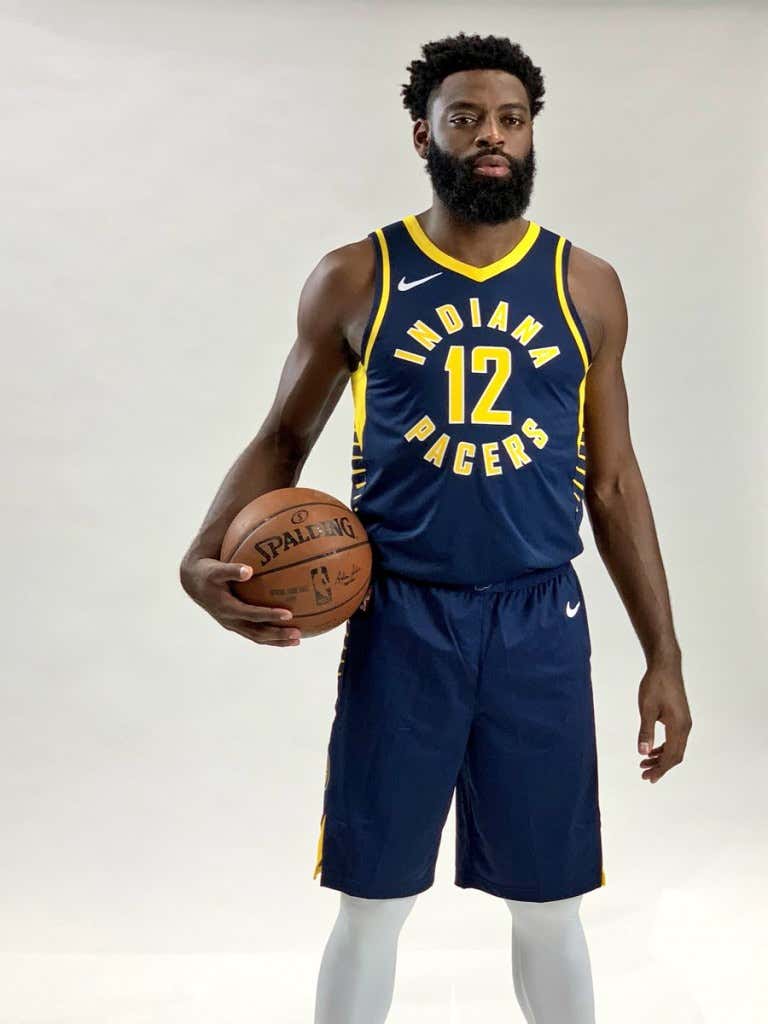 I think Tryeke Evans has been on about 50,000 teams. so it’s not as weird to me seeing him in a Pacers uniform. Honestly you could tell me he’s been on the Pacers this whole time and I’d believe you. It fits him if that makes any sense. Hopefully Pacers fans don’t end up hating this once they realize there’s a chance Evans’ 2018 production was simply because he was in a contract year. 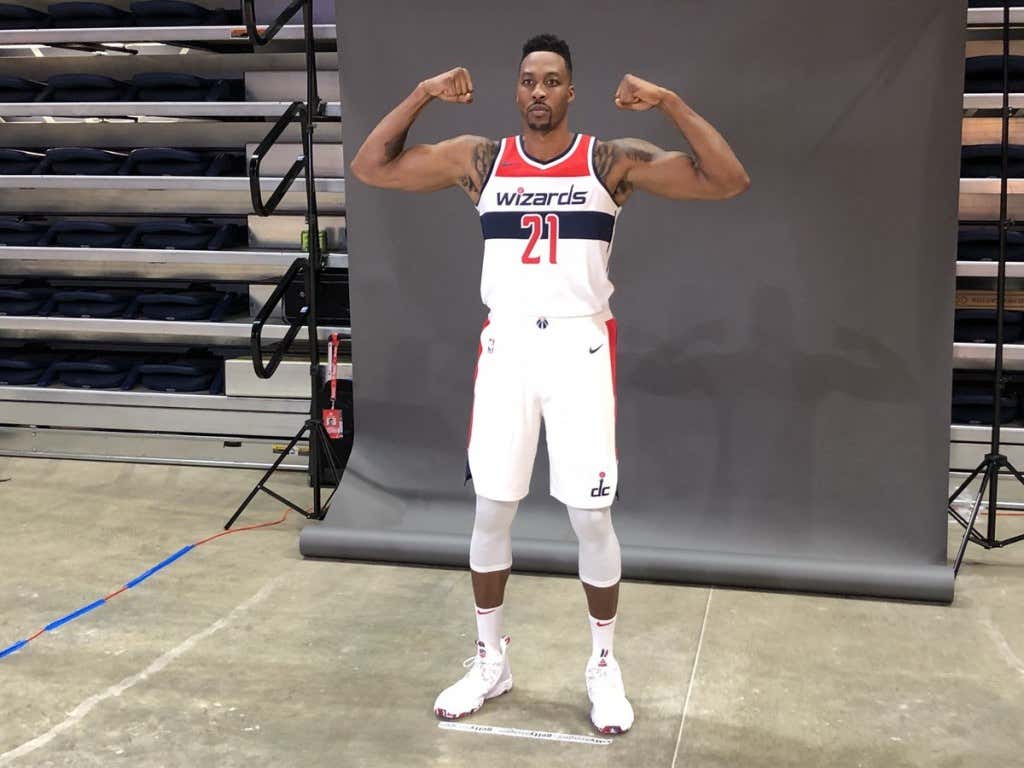 The only thing weird about this is the Wizards think this is going to work. Much like Evans, I feel like Dwight has been on every dumb team in the league so seeing his pictures today didn’t even make me blink an eye. To say he is perfect for this team couldn’t be more true, as nobody on the Wizards has even an ounce of self awareness. Maybe wherever he goes after this year will look weird, but this looked about right in my opinion.

These were just the ones that stood out to me after yesterday’s festivities. I’m sure there are some I didn’t include like all of the other Lakers misfits, but they didn’t really feel all that strange. Is there anyone you can think of that really looked off to you that I didn’t mention? Lemme hear about it in the comments below. All I know is my basketball itch is at an all time high, and I’m ready to see these guys in the preseason.