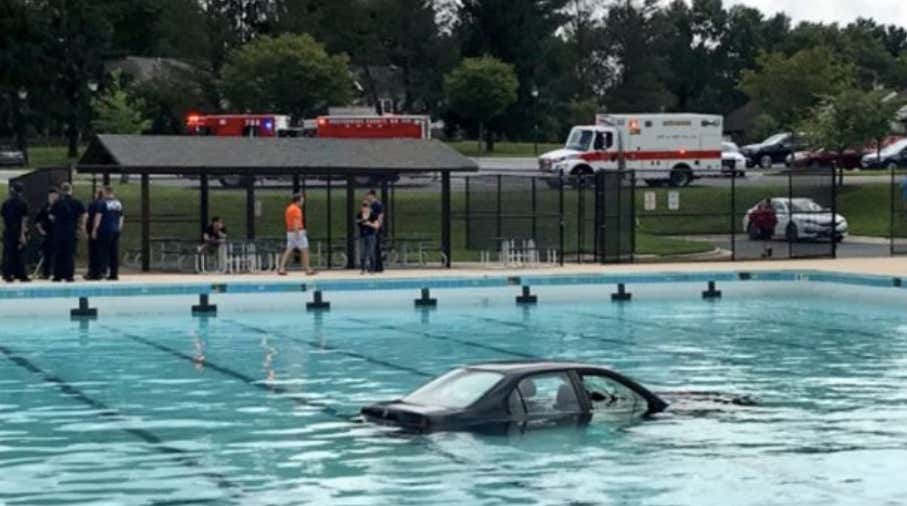 Fox News – A lesson on how to park a car somehow turned into a swim at the community pool.

Maryland’s Montgomery County Fire and Rescue service says it found a car sitting in the middle of a city’s pool over the weekend following a “driver error during [a] parking practice session.

Pete Piringer, a spokesman for the service, tweeted there were no injuries and both people managed to climb out themselves.

He said in an interview with the Washington Post that a man and a woman in their 50s or 60s were in the car, although it was not clear who was behind the wheel.

Gaithersburg Police are investigating the incident.

When I first saw this headline I was all but certain it was gonna be about some little high school kid getting some driver’s ed lessons to save $$ on insurance only to take the whole squad swimming during a parallel parking lesson. The whole story just made too much sense. Anyone who’s ever participated in the scam that is driver’s ed remembers having to sit in the backseat of a 2001 Ford Taurus and hold on for dear life while one of your peers learned on the fly how to merge onto a parkway or make a left turn across oncoming traffic. It ain’t fun.

Boy was I wrong. Apparently this death missile was driven into a pool while 2 middle-aged adults, a male and a female, were taking part in a parking lesson. Unless they were practicing how to approach a spot at high speed only rip the e-brake and fishtail into a spot like Vin Diesel in 2 Fast 2 Furious, I still don’t really get what happened, but that’s beside the point.

The original article doesn’t specify which adult was driving at the time of the bizarre crash, but to be honest it doesn’t really need to be said. There’s only one way that a car ends up in the middle of a public swimming pool after crashing during a fucking parking lesson, folks.