Everyone is focusing at Eli’s face when he is on the ground since he does look like the I’m Fallen And I Can’t Get Up lady. But I’m pretty sure Eli’s soul briefly left his body at this moment: 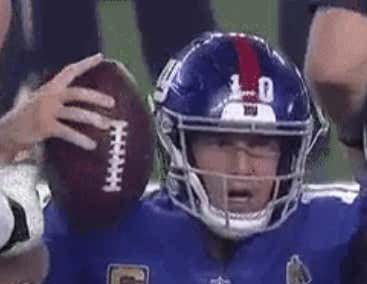 So after an entire offseason hopeful optimism that getting rid of Benny Mac, throwing some money, a high draft pick, and reshuffling the chairs on the offensive line, and just praying that everything that went wrong last year would go right this year seems to already be out the window. I have talked myself into the Giants being okay at 0-2 because a team significantly better built than this once ended up as Super Bowl Champions more than a decade ago wayyyyyy too many times over the last few years to get my hopes up yet again. Between the offensive line still being a mess, Eli not making plays when he actually has time, and the frustration of having some of the most talented players at the glamour positions unable to get the ball, I am getting ready to lose my fucking mind like Teddy Atlas. Instead of a team that just needed some tweaks behind an aging, 2-time Super Bowl MVP quarterback, it looks more like the sad sack team from last season with a shell-shocked QB that needs to start thinking about the future at the quarterback position. We may be indeed be living in the darkest timeline right now, Giants fans.

I was hoping last night’s game against the Cowboys would right some of the things that concerned us against the Jaguars. Nothing says new beginnings like a Giants-Cowboys game in Dallas on Sunday Night Football. But all that hope disappeared when Dak Prescott connected with Tavon Austin early and the Giants were playing catch up the rest of the night in their typically ugly fashion. The Cowboys defense got to Eli often and even when they didn’t, it didn’t matter. Eli was check check checking down Mikey McD style to the point Saquon Barkley set a record for Giants receptions in the game. While it’s nice Saquon is already in the GMen record books, that wasn’t the kind of game Dave Gettleman was hoping for when he drafted Barkley over a bunch of potential franchise QBs. The offense continues to be shit after the switch the McAdoo’s offense to Pat Shurmur’s. We even have depressing stats to back it up!

If you wanted another example of why everything wasn’t Tom Coughlin’s fault, just reread those stats while adding some vodka/bleach to your morning coffee. The Giants have not only been bad but they have been ugly for years. I tried to do my part to change the mojo.

But due to extreme circumstances beyond my control, I was unable to follow through. So if you want, blame me for last night’s loss. I can’t do much to help the Giants from my house in Winterfell. But I have to follow through on the stuff I can do. And for that I apologize. Playas fuck up. I’d like to say that with a few small changes and adjustments in Shurmur’s system, everything can get fixed. But I don’t believe that because I have seen nothing over the last few games or even last few seasons to believe that and I truly feel like we are about to embark on another shitfest of a season.

Anyway, we’re on to Houston to play the team that has JJ Watt and Jadeveon Clowney. 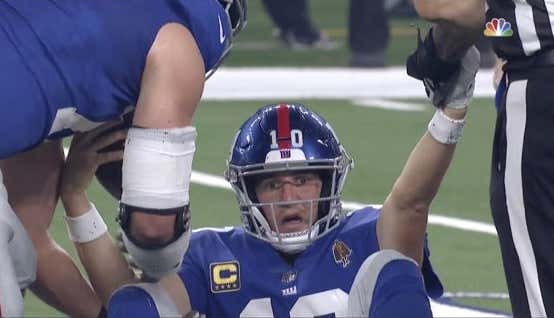