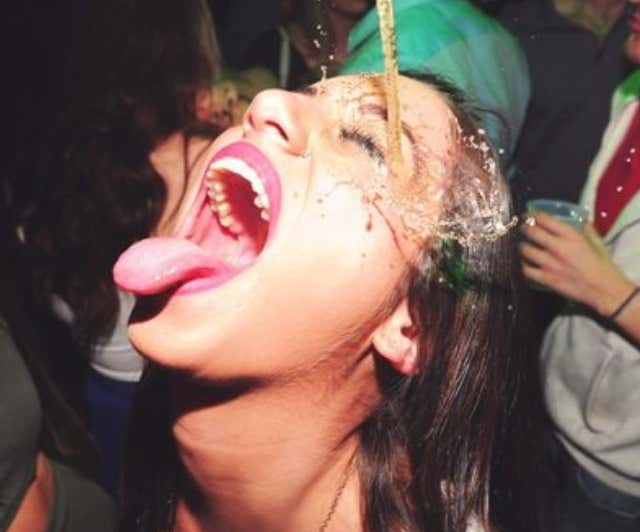 If you don’t know Kirill, he’s the dude who goes around throwing parties and his signature move is blasting chicks in the face with champagne. The Champagne Facial. He calls himself the Slut Whisperer and his overall vibe is pretty douchey if you ask me, but wild shit has been going on at parties since the beginning of time.

So on Saturday he threw one of his parties in Hoboken (which is weird enough as it is to begin with, I thought he was like a Vegas / Miami kinda guy. Maybe Slut Whispering business is drying up) and shit went completely off the rails. The bar has been shut down on 15 charges, including multiple counts of “assault, lewd activity and acts of violence.”

Hmag - Over the past few days, hMAG has been investigating details about an incident that allegedly happened at The HUB (16 Hudson Place) this past weekend.

The footage hMAG was shown is extremely graphic, involving a number of lewd acts committed on the bar, in full view of staff.

The incident allegedly involved an emcee, who stood on the bar at Hoboken nightclub and sprayed champagne on a unnamed female who was in a state of undress. At that point, an unknown male party engaged in acts with the female on the bar, and the resulting video has subsequently gone viral.

Some reports say she was penetrated with a bottle. I’m not dumb enough to Gawker us, but the videos can be found very easily. In them you can see Kiril pouring champagne down a girl bent over naked while a guy performs multiple sexual acts on her. The girl is clearly bombed. Not a bouncer in sight. Cameras rolling everywhere. The whole thing is NOT a good look for anyone involved. I don’t know if the guy and girl involved were together, if they were completely random, and if any of it was agreed upon or consented to. But even if that is the case, with the amount of booze that was clearly involved and the public nature of it all, I can’t imagine this goes well for Kirill or the bar owners. Like I said crazy shit has always gone on at parties. We hosted plenty of Blackout Parties where girls were doing all sorts of promiscuous stuff for attention and for the cameras. But guys weren’t allowed on stage. Girls danced by themselves freely. Security and Barstool employees always kept a close eye. But if you see these videos, you very clearly know when a line has been crossed. I’d say that line involves people being completely naked and penetrated when they are very much drunk as opposed to dancing slutty or flashing some skin. In this case you take one look at that video and you know, no matter what the circumstances, that it shouldn’t happen. It can range from “lewd acts” to “sexual assault” and no matter where it falls, the whole thing is super uncomfortable.