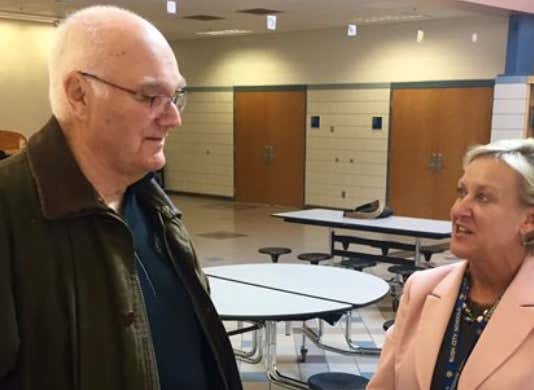 Source - LUCK, Wis. – Few would question the generosity of a man who promised to pick up the cost of a two-year degree for an entire high school class.

There should be no doubts now, after businessman Dennis Frandsen extended the same offer to each and every student of the 2019 graduating class in Luck, Wisconsin.

The Luck Public Schools confirmed for KARE 11 that that Frandsen — a self-made success who now has 35 branches of Frandsen Bank and Trust in communities across Minnesota and Wisconsin — offered to pay for two years of technical college for all of Luck’s 34 prospective graduates this year. A planning meeting to explain to parents how the program will work will be held in October.

Luck Public Schools Superintendent Cory Hinkel told the students about Frandsen’s generous gesture during an assembly Tuesday on the first day of school. “The look on the kids’ faces was priceless,” Hinkel recalled. “I really think this is going to make a huge impact on a lot of our kids’ lives.”

To be fair, Dennis Frandsen is no Michael Scott. His company has over $1.5 billion in assets and employs over a thousand people across four states. I don’t know the ins and outs his financials. I know Michael Scott owned a condo and a sweet plasma TV, but chances are Frandsen has the funds to make this happen. That said, part of me wants this whole thing to turn out like Scott’s Tots. How fucking hilarious would that be if these students went to cash in their IOU’s next year and Dennis was nowhere to be found? Or better yet they do find him and has to face the music of not being able to pay? I hope they have a backup plan because a lot can happen in a year.

If this guy was a real hero he would’ve done this anonymously, but I guess that defeats the purpose. What’s the point of doing something nice if you don’t get credit for it? I do nice things anonymously all the time, like put a quest bar on Nate’s desk every morning because I know he likes them, but most people aren’t like me. Most people want the credit, which is why I’m assuming this guy’s making a big stink out of his generosity. He did the same thing last year when he paid for the class of 2018’s tuition.

Alright I’m done with the negativity. Congrats to these kids on being born in the right place at the right time and doing nothing to earn a free college tuition. Enjoy the next four years and spend the money wisely.