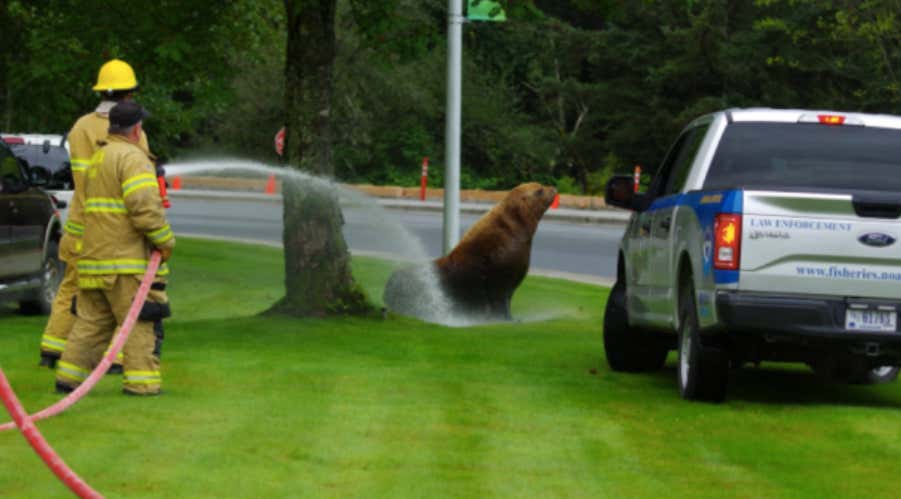 Fox News – A Steller sea lion in Sitka, Alaska was reportedly rescued by officials on Monday after he spent four days trapped on land, dehydrated and hungry.

The sea creature was first spotted around 2 a.m. on Friday morning, running down a road in southeast Alaska, the chief of the Sitka Volunteer Fire Department told the Anchorage Daily News.

Look at that thing go! He’s a natural Seal-attle Slew. I know sea lions aren’t actually seals but give me a break I don’t have a lot to work with here.

I’m not sure how this big fella got lost and ventured so far away from the water. What I do know, however, is we should all consider ourselves lucky for getting to witness the animal’s big adventure, shoutout PeeWee Herman even though he masturbates in movie theaters.

After the lost boy was spotted truckin’ down the street at 2am, he was later spotted camping out in the woods neighboring a local high school.

That’s one of the most fascinating nature pictures I’ve ever laid my eyes upon. At this point, you have to start feeling really bad for the guy. He must’ve been so confused in that moment. Dragging his blubbery mass of a body across broken sticks for likely the first time ever, maybe eating some dead leaves amidst the chaos. Poor thing just wants to go home.

Another great video to really put in perspective how fucking wild this whole situation is. I’ve laughed out loud every single time I’ve watched that video when you first see the sea lion on the side of the road, half of his body hidden in the bushes with his head held high like a goddamn statue.

Don’t worry though, eventually wildlife authorities got involved, pulling trick after trick out of their sleeves in an attempt to direct the creature back to it’s natural habitat.

Eventually, our beloved friend whose name has yet to be finalized made it all the way back home, thanks to the help of some firefighters, wildlife authorities, and some good old fashioned Alaskans.

All in all, what a roller coaster of a few days for this lost and confused sea lion, and the town of Sitka, Alaska as well. I’m glad it ended happily, and I’m even happier the entire ordeal was so well documented I was able to break it down and spoon feed it to you in healthy, digestible portions. Portion control is key.