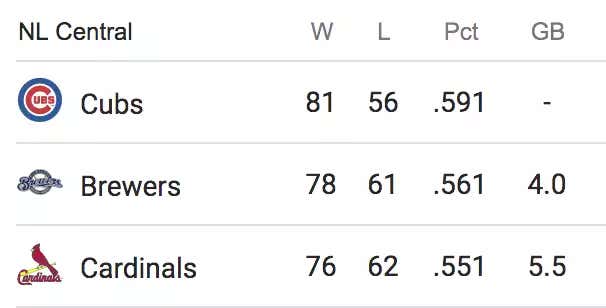 Nothing helps you get out of bed after a tough loss quite like first place. Mix in a healthy 4.0 game lead with the opportunity, gentlemen (Herb Brooks) for immediate retribution makes it that much easier. In other words, the panic button is over there *emphatically points at a large dumpster burning in flames packed to the fucking gills with broken panic buttons* Losing a bullshit and I repeat BULLSHIT game to the Milwaukee Brewers to open a 3 game set will not alter the course of history any more than the half a dozen farts I ripped in my sleep last night. These organizations are two ships passing in the middle of the night. One is going to a place called Eternal Glory while the other docks up just outside Milwaukee on Lake Michigan. Let’s talk some baseball.

The Cubs Lost On This Play

Kris Bryant is one standard deviation off the Javy Baez scale from making that play as he decided. Unfortunately he didn’t and more unfortunately the Cubs lost 4-3 to the little brother.  Even more painful is that the Brewers scored via HBP, walk, passed ball, HBP and a fielder’s choice. I’m all for the randomness in baseball but that 9th inning was more like I got my heart ripped out of my fucking chest in a human sacrifice:

I’m on record saying you can’t criticize KB’s decision making there because it’s not a decision it’s a reaction. Hard play that takes him to the bag, his instinct is to force at 3rd then go 1st. Someone said why not throw home then get the force at 3rd for the 2nd out? Because it’s Kris Bryant and not Javy Baez. Limit your expectations on how instinctive someone can be. Don’t let Javy’s sex and sizzle ruin your perspective of slightly-above-average defenders like Kris Bryant. Yelich had it by half of half of a step.

On the bright side there were no extras, which would be a big Fuck You when playing a day game following a game and travel day on Sunday. Extra innings would have been a disaster so let’s take the 1-run loss and celebrate some positives.

Statcast said that’s the most clutch homerun hit in some time. Not exactly sure because baseball history is so rich. But that was a big dinger from a big swinging dick. Almost makes you think if there was a way to recognize his leadership and excellence above and beyond his teammates. If only sports had created some kind of designation to be put on a jersey, like a star or a C for captain. Makes you think that if someone was smart enough to do that, then the Cubs would 1000000% have to put a C on Rizzo’s jersey. Just sucks that no one has ever done that before in sports, ever. Because boy oh boy would Cubs’ fans go FUCKING BANANAS if Tom Ricketts ponied up the cherries to put a C on his chest without considering what that would mean for Anthony Rizzo’s contract demands he’s about to make this offseason.

Sometimes it pays to just give the fans what they want. Put the C on his chest already.

Cubs vs. Brewers at 7:10pm central. Monty vs. Wade Miley who is still in the big leagues after posting a 78 ERA+ in 2016-2017 over 62 starts with the Mariners and Orioles. If there are baseball Gods, and there are, then I would imagine Miley gets his tits blown off his chest after what I watched yesterday from the umpiring crew. There’s karma in the air, it’s magic and we have a fucking magician in the middle of our lineup clamoring for the MVP. Gun to my head I expect the Cubs to load up on Wade for a good solid 7 runs in 2.2 innings. Call me an optimist CUBS IN 4.

PS – Red Line Radio is now an official Barstool Sports podcast which means I can start talking about it in my blogs. This week I went OFF on why Kyle Hendricks is back and what that means for the Cubs moving forward. If you like reading my blogs and can stomach my voice then do me a solid and follow the pod. Hendricks talk starts around 48:40