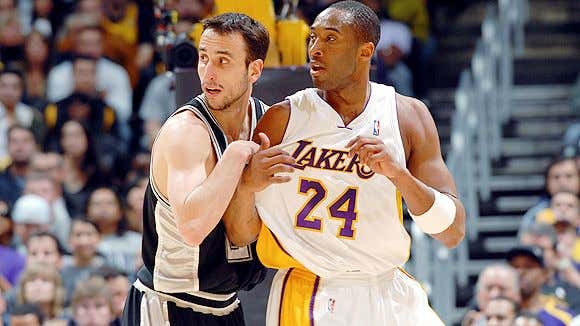 [ESPN] – Ginobili won Bowen over, too. In one of Ginobili’s first matchups with the Lakers, Kobe Bryant sidled over to Bowen and asked about Ginobili, Bowen recalled: “Tell me about the white boy.” Bowen warned Bryant, “Oh, you’re gonna see. He’s not a white boy, and he’s got some stuff.”

I’m not done talking about Manu and you can’t stop me. I loved the guy. One of my 5-10 favorite basketball players ever.

So, this story came out a couple years ago but is starting to resurface with Manu’s retirement. I can’t stop laughing at the scene. Kobe, being Kobe, leaning over and whispering to Bruce Bowen. I also find it hilarious that he just calls Manu the white boy. I’ll give Kobe credit though – one thing he always wanted to do was get as much info as possible when it came to opponents and always talking about the game.

Great call by Bowen too. I mean he nailed it saying he’s got some stuff. You know Bowen saw some shit in practice with Manu hitting ridiculous shots and Eurostepping everywhere only to warn Kobe. It’s fair to say Manu lived up to the hype vs Kobe a few years later:

He’s got some stuff for sure.