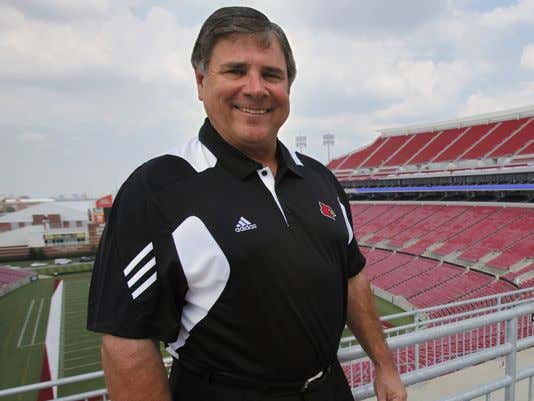 [Courier-Journal] – In writing this email, I hope to be clear.  It has been my goal to move on – yet you continue to attack my family which gives me no other option than to respond.  This email is not about tickets.  It is about you and the University dishonoring my father and your blatant disrespect for my family.

If you cannot bear the sight, or rather the optics of Tom Jurich in the YUM! Center or Cardinal Stadium, you are weaker than I thought.  If you feel the need to hide my dad in a corner to make yourself feel important or simply comfortable, then so be it — he will do that for you.  But you cannot possibly think you can erase him by hiding him in these stadiums.  His fingerprints are everywhere.  Your coaches still call my dad for advice.  Your players still call my dad for insight. Your administration still calls my dad for guidance.

However, this all begs the following questions.  Why be so petty?  Why not be confident in the leader you think you are, rather than disregard the leader my father has always been?  Why not honor him?  Why not allow him to keep the seats he has earned after 20 years?

So this was an e-mail written by Tom Jurich’s son in response to their seats being moved for the upcoming Louisville basketball season. I mean, it’s fair. Look at the picture below and where they have to sit now:

Look how disgusting that is. You might as well be in Lexington to watch a game from here. Having to deal with what? 30 rows of people in front of you. Couldn’t be Tom Jurich, that’s for sure.

Now, I know what you may be thinking? First, who is Tom Jurich? Well he was the AD that was fired along with Rick Pitino because, well, frankly the Louisville athletic department turned into a shitshow and that tends to fall on, oh, I don’t know, the athletic director. Jurich was fired following the news that Adidas paid Brian Bowen’s family $100,00 to go to Louisville.

So why is his son losing his mind? Well, he also lost his job when they fired Tom. Now the seats are part of the settlement for the firing. The Jurich’s get these seats for 20 years. Let’s not forget the millions of dollars he also got in the settlement, but you know, details and free seats are more important. Obviously he used to sit right behind the bench and is now relegated to the worst seats I’ve ever seen.

Maybe the Jurich’s should just use Seatgeek and upgrade their spots.