The big boys of college football kick off this weekend, and campuses around the country are already buzzing about their Heisman hopefuls. Only three players who received votes last year returned to school, and the field looks to be as wide open as ever. Many questions will be answered between now and December 8th when the 82nd winner of the top individual award in the sport is announced. Who’s going to shine brightest on the big stage? Who plays too late at night for the East coast to see? Who is going to have that signature Heisman Moment? One thing is for certain: you can’t talk rising and falling stocks after Week 1 if you don’t have preseason rankings, so let’s get ourselves a good base and check in with the Top 10 candidates. 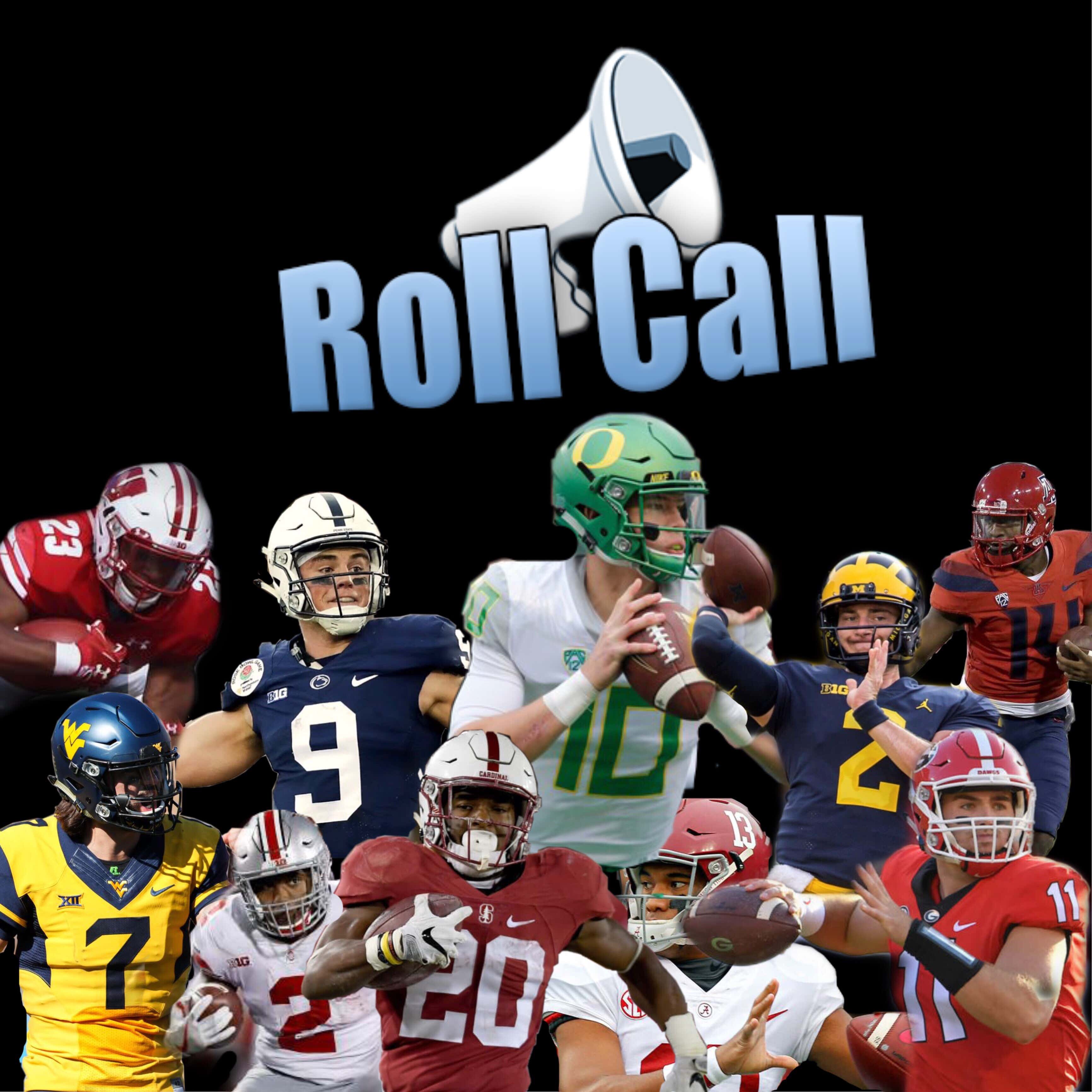 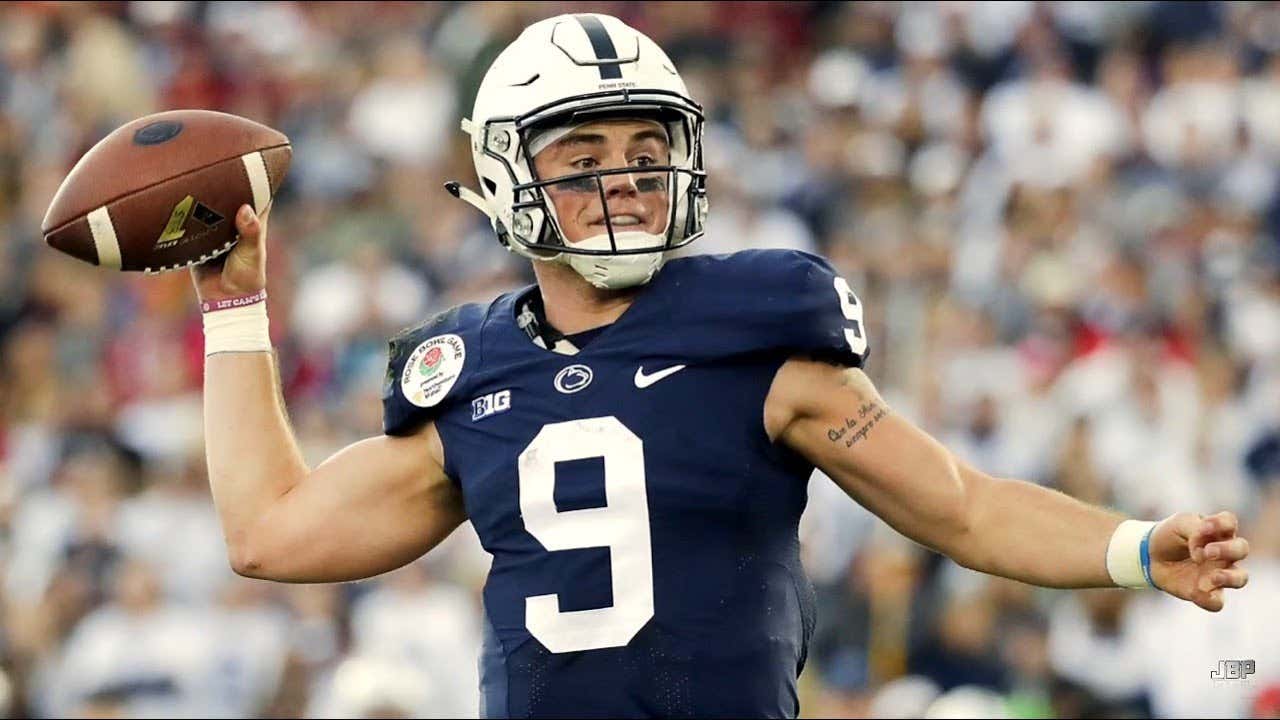 With the graduation of do-everything running back Saquon Barkley, McSorley will be expected to carry more of the load for the Nittany Lions this year, who come into 2018 with very high expectations. Penn State will have many opportunities for their quarterback to perform well in front of the nation, as they currently have four games scheduled against top 15 teams. The redshirt senior has thrown for 3,000 yards in back to back seasons and is responsible for 77 touchdowns in his career, the most in school history. McSorley will need to get acquainted with a new set of pass catchers for the offense to run smoothly, as he lost both WR DaeSean Hamilton and TE Mike Gesicki, both of whom hold the Penn State record for receptions at their position. 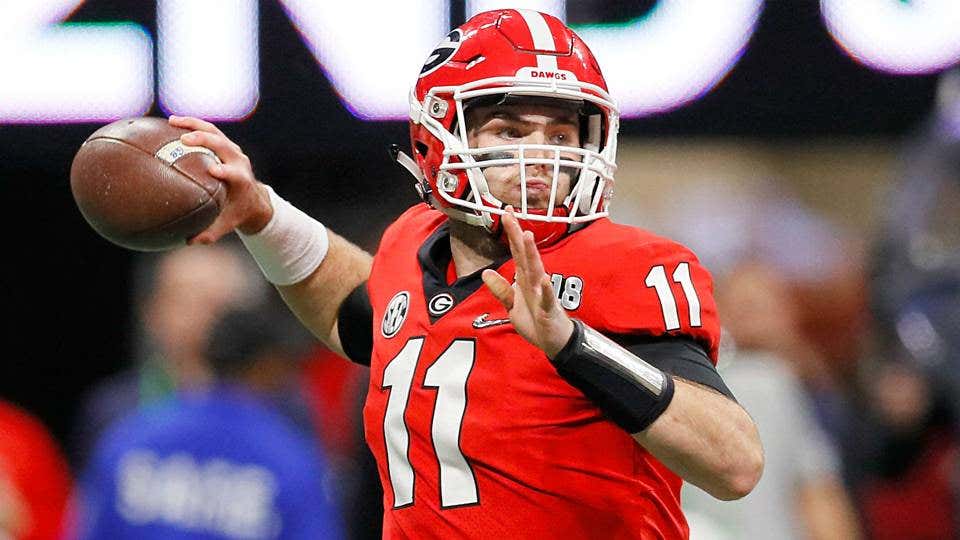 The Bulldogs haven’t had a Heisman winner since Herschel Walker won it in 1982, and the 2nd year signal caller out of Warner Robbins, Georgia is looking to end the draught. As a true freshman, Fromm managed a run-heavy offense to an SEC title and National Championship appearance. The departures of running backs Nick Chubb and Sony Michel figure to leave Fromm with a heavier workload in 2018.  The 6’2” 225-pound sophomore returns after throwing from for 2,615 yards, 24 touchdowns, and only 7 interceptions last season, and reports out of camp say that he is looking much more comfortable and confident. Georgia’s looks like a good bet to be right in the thick of things all year, which bodes well for Fromm. Should he and the Bulldogs be able to repeat as SEC champions, it would be tough to imagine him not getting the invite to New York 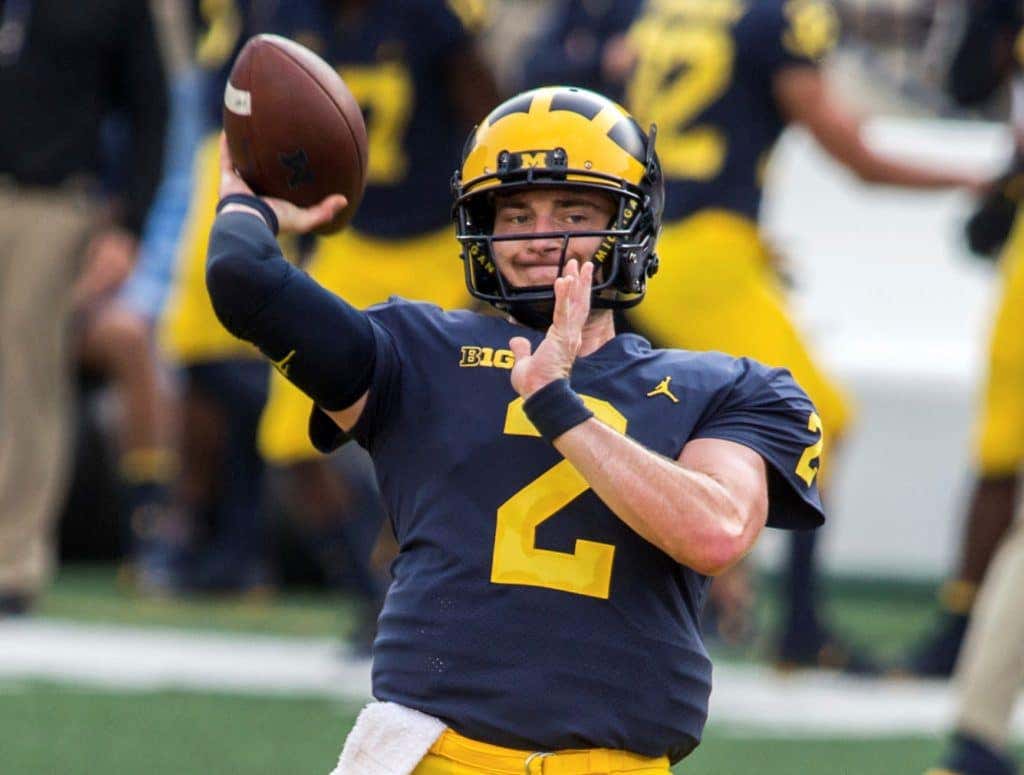 The Ole Miss transfer gets an opportunity to announce his presence in the Heisman race with authority when his Wolverines meet up with Notre Dame in a Week 1 Saturday night primetime showdown. Before going down with a knee injury last Fall in Oxford, Patterson led the SEC with 2,259 passing yards. The junior not only has the talent to compete for the Heisman, he also has the storyline. Michigan is looking to return to the top of the college football landscape, and their biggest Achilles heel in recent years has been quarterback play. If the Patterson can put up above average numbers, scoring some signature moments in primetime and beating Ohio State for the first time in seven years would be quite the resume come December. 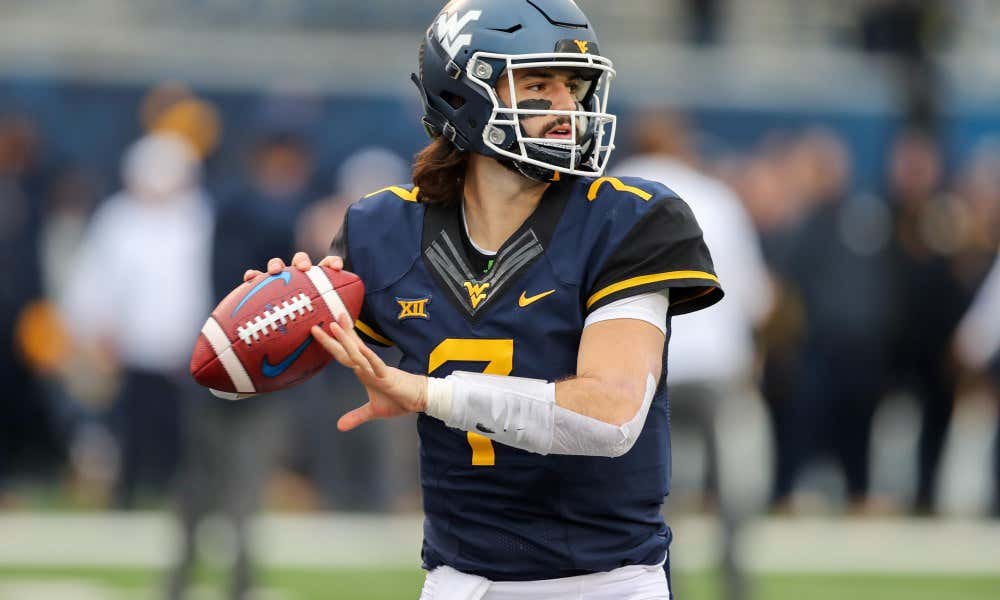 The preseason Big 12 Offensive Player of the Year enters his senior campaign coming off a 3.490 yard and 34 touchdown injury shortened season. The former Florida Gator decided to forgo the NFL Draft and return to Morgantown, where the Mountaineers look to shake off a 6th place conference finish last year in which they dropped their final three games. Grier’s main weapon David Sills also returns, who hauled in a nation’s best 18 touchdowns in 2017. Grier figures to put up huge numbers in Dana Holgorsen’s Air Raid offense, but interestingly enough, his Heisman chances are likely closely tied to the Mountaineers defensive performance. If the defense can do just enough to allow them to win the high-scoring affairs they’ll be playing in, Grier will captivate the nation with his performance in those shootouts. 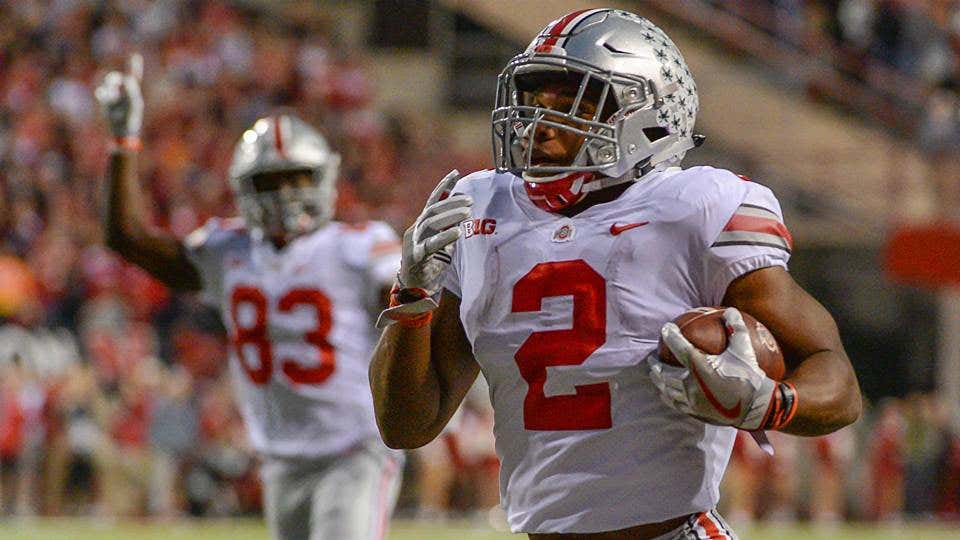 In his freshman season at Ohio State, Dobbins surpassed Maurice Clarett for having the most freshman rushing yards in school history with 1,403.  The best asset to Dobbins campaign may actually be the graduation of JT Barrett. The new quarterback, Dwayne Haskins, is much more of a pocket passer than the dual-threat Barrett, meaning that most designed rushes will likely go to the running back position this year. Dobbins averaged 7.2 yards per rush in 2017, but he only received 15 or more carries in four games.  His biggest hurdle for the Heisman may actually come from his own team, as his teammate Mike Weber, who was a 1,000 yard rusher in 2016, expects to return to a heavier workload after injuries plagued last season. 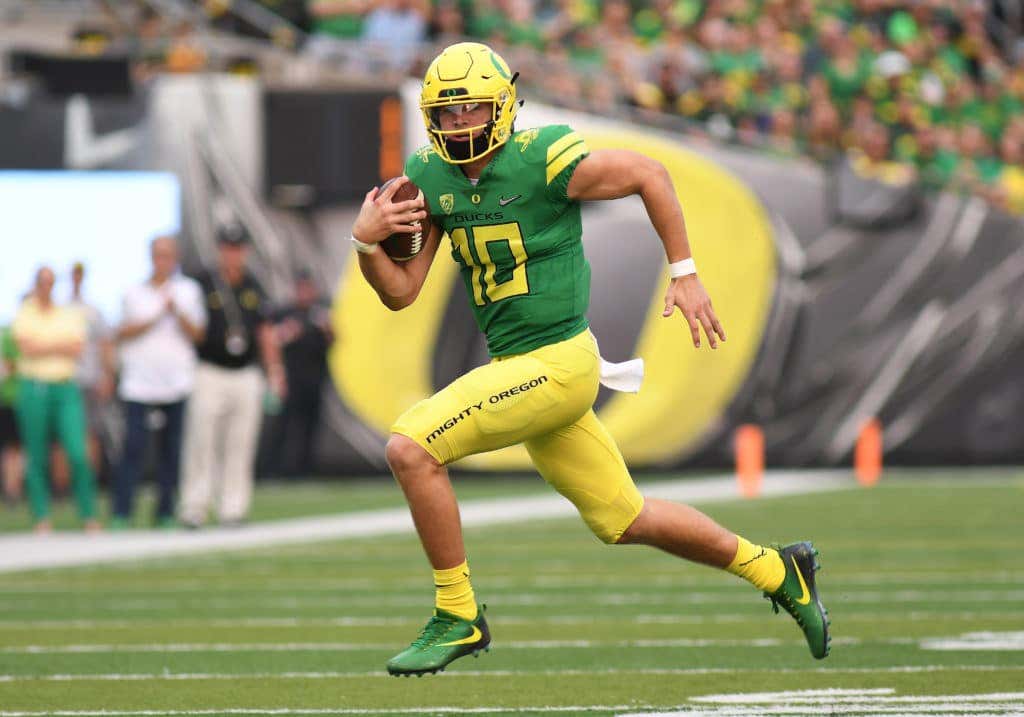 The junior quarterback has not completed a full season yet due to injuries in 2016 and 2017, but when he has been on the field, it has been nothing short of electric. The Ducks went 6-2 and averaged 52.1 points per game last season with Herbert behind center, and that changed to 1-4 averaging 15 points a game without him. The 6’6” junior is regarded as one of the NFL’s highest prospects with his size, strength, athleticism, and throwing abilities. An obstacle that Herbert must overcome to be a true horse in the race is his team’s performance. While many candidates on this list are true contenders to be playing in the College Football Playoff meaning they will have plenty of high profile games, Oregon has finished fifth and fourth in the PAC-12 North in the last two seasons. 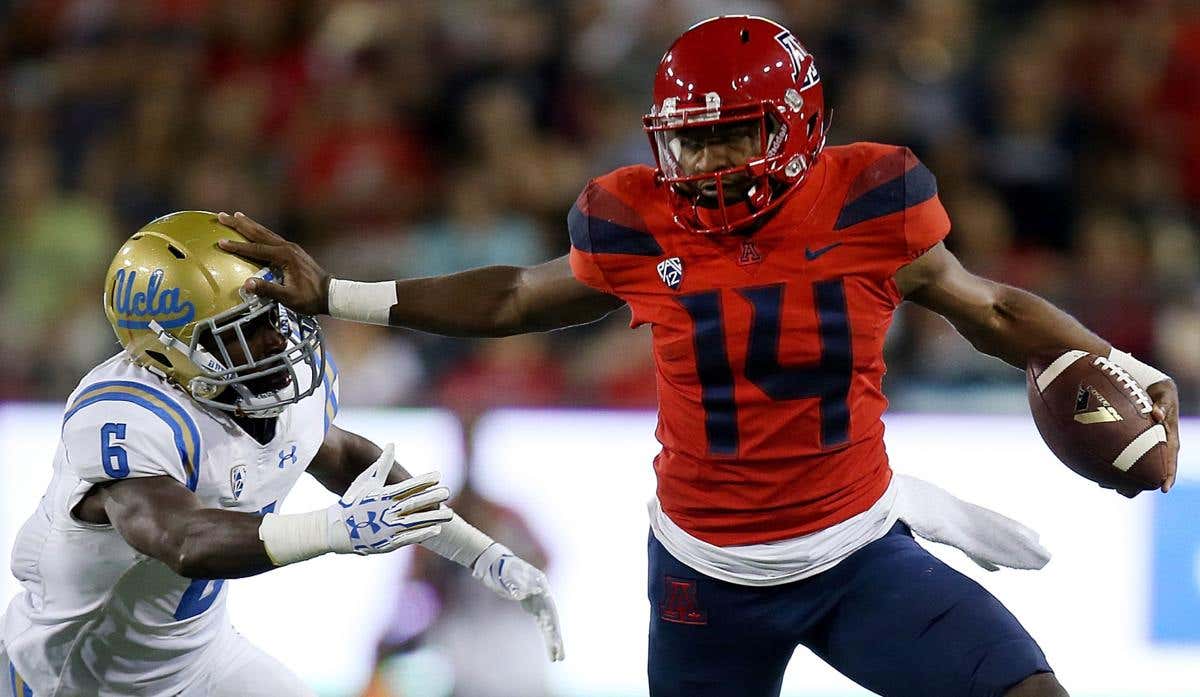 Kevin Sumlin takes over at Arizona this season and will look to groom Tate like he has done many other quarterbacks in the past. Sumlin helped guide Johnny Football to a Heisman in 2012, was an offensive assistant for the Heisman winning campaigns of Oklahoma quarterbacks Sam Bradford and Jason White, and he coached Case Keenum to 136 touchdown passes in three years at Houston. Tate currently holds the FBS quarterback rushing record with 327 yards in his first start of the 2017 season versus Colorado, and he went on to set a Pac-12 record with four straight Offensive Player of the Week awards. 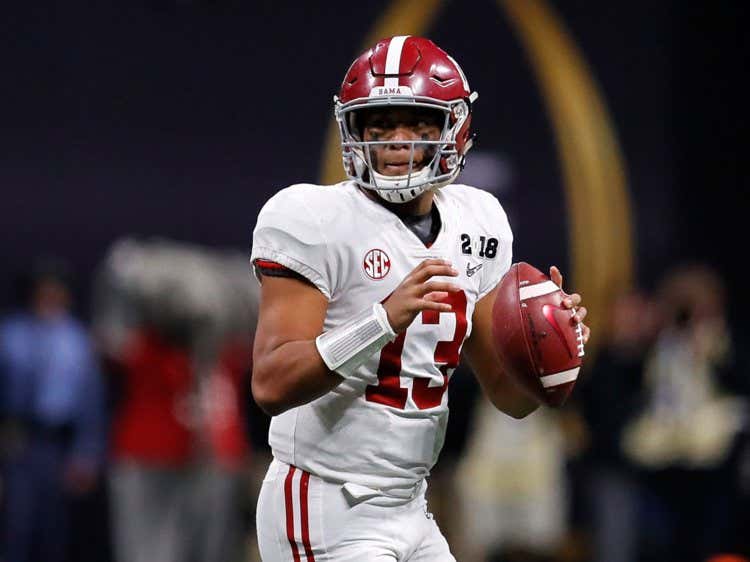 It’s absolutely insane that the #3 front runner may not even be a starting quarterback, but Tagovailoa has the catchy name, lefty style, dominant team, and incredible talent to bring home the hardware should he get the nod in Tuscaloosa. Tagovailoa showed what he is capable of when he entered the National Championship down 13-0 at the half to Georgia last year, anchoring a 2nd half for the ages with 3 touchdowns in a come from behind victory. If he beats out 26-2 starter Jalen Hurts, Tua will have many opportunities to shine on the biggest stage. Alabama, who usually rolls out a mistake free quarterback that plays off of their monster defense, has not had a true gunslinger like this in years. If Saban lets Tagovailoa air it out, it’s hard to see him not finding a way to get to New York in December 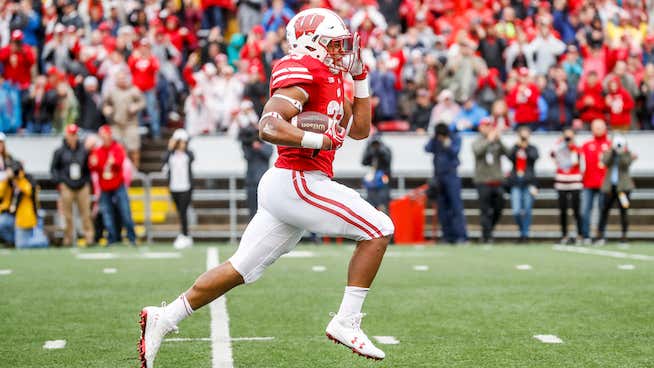 Taylor broke the NCAA freshman rushing record last year with 1,977 yards on the ground, esclipsing Adrian Peterson’s mark of 1,925 at Oklahoma in 2004. There is no secret that Taylor will get the ball early and often, as Wisconsin ran the ball 64.4% of the time in 2017. The Badgers cupcake schedule helps Taylor out here too, as they have no challengers in the non-conference, and they avoid both Michigan State and Ohio State in Big 10 play. The longer Wisconsin stays unbeaten, the better. If the Badgers can win the Big 10 and head to the College Football Playoff, it will be hard to top Taylor this year. 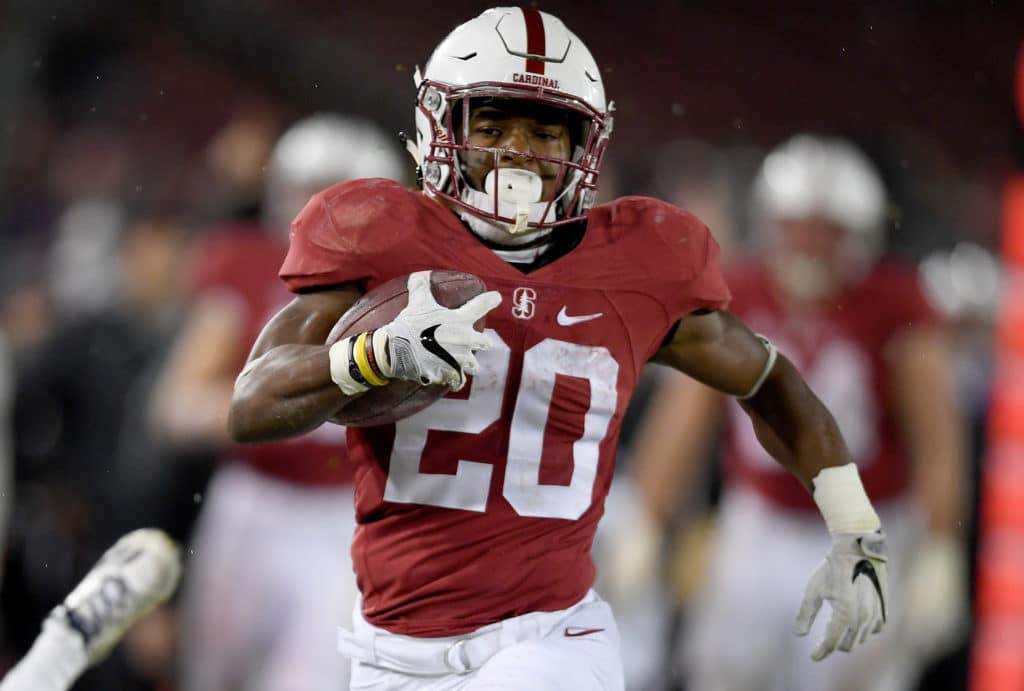 Love is the Vegas favorite coming into the year, but that certainly does not mean that he is a lock. Since 2000, 15 quarterbacks have won the Heisman as compared to only 3 running backs. To put it into perspective, Love rushed for 2,118 yards, an FBS record 8.1 yards per carry, and 19 touchdowns last season and still lost the award to Baker Mayfield. The odds are even more stacked against him as Stanford will likely not be a National Championship contender, and they oftentimes play late out on the West Coast. Regardless, only two other players have ever come back to school after rushing for more than 2,000 yards, and Love made that three when he decided to turn down the NFL draft. Stanford will feed Love the ball early and often, meaning he will have the opportunity to put up huge numbers again this year. He just needs to make sure people see them this time.