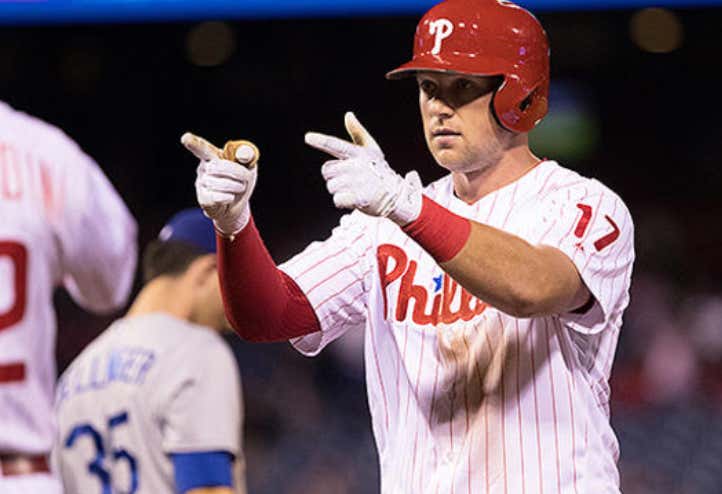 When we looked at our MLB calendar for the weekend and saw the Braves were on the road for 4 in Miami, we probably thought to ourselves, hmmm this series in Toronto is must win. I’m sure Gabe and the boys thought the same thing. Instead, they decided to allow Cy Young to emerge on Friday and blow a 5-0 lead on Saturday, before they decided to play baseball yesterday. For some reason, the baseball gods showed us mercy and kept us in the hunt as the Marlins split their 4-game series with Braves even though they only scored 4 total runs.

The weekend did allow us to witness the Phillies offense continue it’s rise from the 7th layer of hell this weekend, hitting a combined .333 with 5 HR and a .925 OPS.

It’s nice to see a 4-homer Sunday. It’s nice to see a catcher, who we basically obtained for free, gather 4 hits as he battles through a wrist injury. But where was this shit on Friday? Where was the clutch hitting all weekend in fact? Al year? Despite the 16 runs scored over the weekend, the boys still went 8-35 with RISP. This is right in line with their season average of .245 which is 3rd worst in the National League.

Of course the bats are starting to come alive so you know what that means… the pitching must now go to shit. Let’s date back to August 7th. Remember this day? The Phillies were 1.5 games up on the Braves and 15 over. 500. Well since that day and If we remove Aaron Nola’s gem on August 23rd, the Phillies are 5-11 with a staff ERA of 6.53 and 46 XBH allowed.

In that same time frame, the bullpen has the 2nd worst ERA in baseball with the highest BAA. Our strongest arm for months, Seranthony Dominguez has hit a wall and then some this month with an ERA of 9, three blown saves and a .980 OPS against. His appearance on Saturday was laughable at best. Most of us have been scratching our heads watching him and trying to figure out what the hell is going on anymore. Is it overuse? Since his 1st ML appearance on May 7th, Seranthony is 33rd in baseball in total batters faced and 21st in innings. His usage is in tune with the majority of closers out there. I just think teams finally have a book on him and I hate to say it, but I think I agree with this tweet below.

Since being recalled on August 15th, Hector has a 0.00 ERA and is averaging 20.2 K’s per 9, which is tops in baseball during that stretch by a billion. If you were wondering if the splitter is back, look no further.

Hector Neris and his splitter are so back. Since his recall, his k/9 is 20.2 pic.twitter.com/Mzvn4PrrWu

I have no idea what is going on with this team anymore. All I can tell you is they are still 10 games over .500 and the offense appears to be heating up while the pitching is tapering off. The division is still very much in play and for the first time since 2007, a team who wins less than 90 games could take it. If Rhys, Santana and Ramos stay hot, the offense will be fine. If Zach Eflin, Vinny Velasquez and Pivetta can stay the course, the starting pitching will be fine. If Pat Neshek and Hector Neris can secure the 8th and 9th, the pen will be fine.

Baseball has so many moving parts, but in reality it’s so simple. Michael Scott taught us this in fact.

As long as Gabe can keep maintain the confidence in the clubhouse through September, I wouldn’t want to be the team in the opposing dugout.

In Gabe We Trust. Go Phils.