“I used to tutor kids and one time a mother asked me for advice. She’d caught her son selling pot and she wanted to know how to punish him. I told her to go easy on him. He has the best shit I’ve ever bought.”

Down a darkened set of stairs off Saratoga’s main street, pretentiously named Broadway, the vibrations of latin congas, bongos, and shakers summon would-be salsa dancers to a dark dance floor. The Newberry Music Hall hosts latin dance classes and free-dance hours in front of a U-shaped bar where men loiter with their shirts tucked all the way in to their knees, moving small straws around their drinks with their tongues, keeping their wolfish eyes low, searching for a partner.

“As a kid, we had placemats of the United States. I knew all the capitals by heart. As an adult, it would have been a lot more useful if the states had listed their ages of consent…”

Behind this sultry scene, a comedy club. Two weighted doors protect a chamber of chuckles, a sanctum of slapstick, where comedians take the stage in search of themselves. The walls are painted a mustard yellow in a vain attempt to warm the funny bones of an audience dismayed over the two-drink minimum. As comedy clubs go, it’s intimate: low ceilings and a capacity of 100 means that even a crowd of 50 feels full. The carpets are stained and soggy from soaking up the jeers, cheers, and beers of the overserved, over years. The initiated call this intangible “character.” 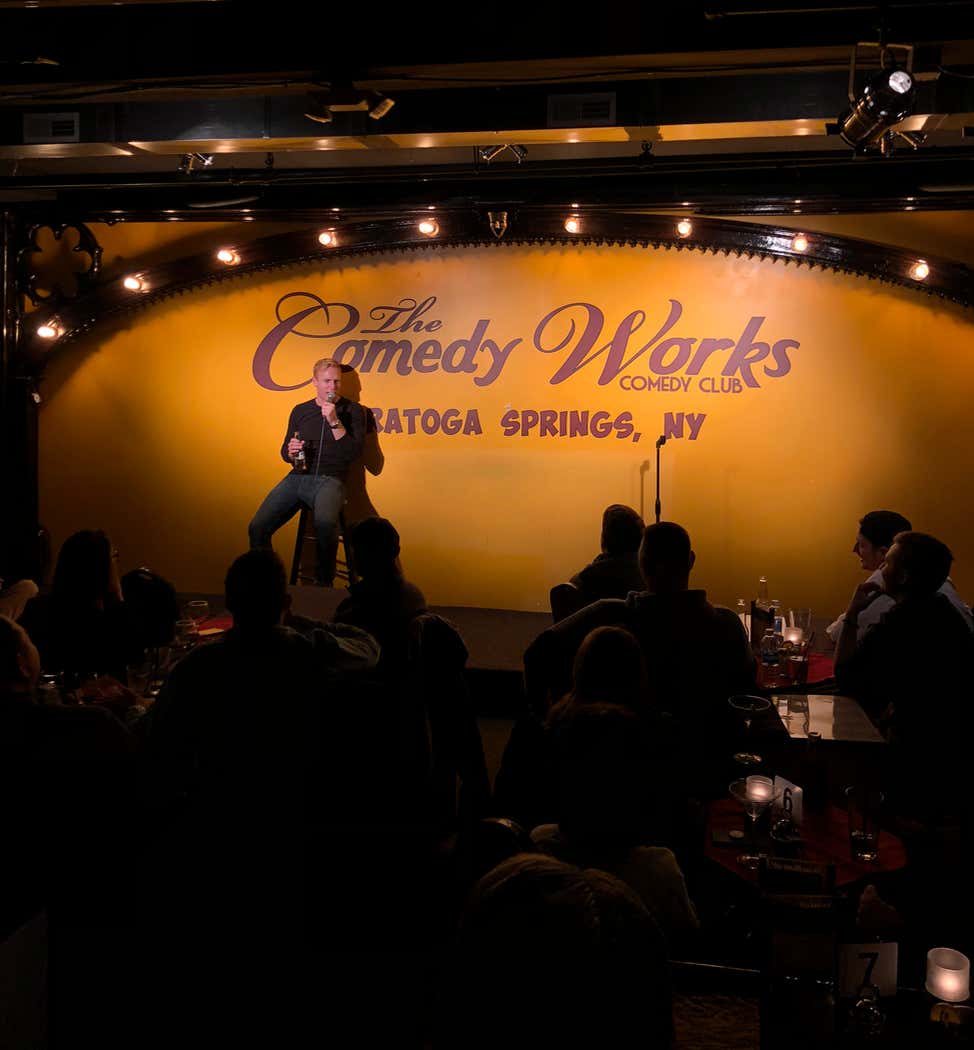 “I used to think there was no better feeling in the world than drinking a cold glass of water at the end of a hot summer day. But then I had unprotected sex. I haven’t had a glass of water since…”

Behind the mustard walls, the “green room.” The term itself has a calming effect on the frayed nerves of rookies and road dogs alike. It is the haven behind the madness, the quiet cell that typically consists of a cracked leather couch, a mini-fridge, and a private bathroom. It is here that the comic will collect himself, inhale the basket of wings, scribble his set on a napkin, blow a few rails of coke, slap himself in the face, and answer the introductory call of his trusty opener. He’ll burst through the doors and trot to the stage as the audience cranes their necks to size-up the headliner whom they’ve come to see. Massive assumptions are made in that 5-second journey that need to be addressed.

“I haven’t paid for Wifi ever since I figured out my neighbor’s password. Sometimes, the connection goes down. It’s in these moments that I’m so glad I was able to install a nanny-cam in their bedroom without them knowing…”

It was down these steps, through the dancing, past the wolves, through the kitchen, and into the green room that Big Cat was escorted by the club’s manager on Friday night. He kept his enormous head down and walked quickly to avoid detection. A ripple of recognition bounced around the small crowd of early arrivers. “Was that… Big cat?” whispered one white guy to another white guy. Excitement grows. Maybe he’ll take the stage? He’s not known for standup, but he is, undeniably, known.

Big Cat is a massive star. I mean massive both ways. The dude is huge. The first time I saw his head, I thought it was fake. Like he was wearing a fat suit over his skull. Don’t get me wrong, he’s handsome. I told him this while we sat in the green room, which wasn’t really much of a green room, drinking green beers.

He’s tan all year-round and his front hairline stands fortified like a phalanx of Trojan soldiers. I kept looking for a weakness in the line, a group of hairs that stood on shaky knees and would desert at the first sign of his fortieth birthday. But they stood strong and dense like a thicket protecting the birth of Bambi. He took a seat on a wicker chair and asked for a beer and water because he listened during his freshman alcohol awareness course at Wisconsin.

Behind us, a faulty toilet gurgled like an old man clearing his throat of a wet mass. Assorted appliances and chairs blocked every exit point. The air from the walk-in refrigerator turned the space into a sauna that saw beads of sweat accumulate on Big Cat’s brow, but they didn’t fall thanks to that outrageously cohesive hairline. Like a game of red-rover played by a group of NFL offensive linemen, the follicles stayed locked, keeping his brow dry. Meanwhile, I was losing a wet t-shirt contest in my white shirt that clung to my back like the original Under Armour heat gear.

“I’m on a new hair-loss medicine. It makes my dick soft, unfortunately. Or so I thought. Then I read that only 5% of people who take it actually get erectile dysfunction. So there’s a 95% chance that I’m just gay…”

We talked and talked as the host of the show warmed them up in the air-conditioned show room. We talked about Barstool, about the old days, about the astronomical success of Pardon My Take, about our friendship. We didn’t actually talk directly about our friendship but everything we talked about indirectly contributed to a narrative about how close we’d become. The only thing bigger than Dan (as his friends, which includes me, call him) is his generosity of spirit. Which is why I wasn’t surprised at what he did next.

Dan said good luck and went to find his seat with a group that included Frankie, Office Manager Brett, Tommy Smokes, and an empty seat for Dave. Moments later, the host called me to the stage. I skipped right out and took the mic with gusto. Then I scanned the crowd. Remember when I said the room would feel full with just 50 people? Turns out, it doesn’t feel full if there are only 30. And it feels especially humbling when there are only 15, half of whom are falling asleep in their hands, as was the case for the late show. I didn’t care though. I was only performing for one table, with a focus on one big friend.

Ten minutes in, Big Cat cemented our friendship with one of the most selfless gestures I’ve ever seen. Their table was right in front, and he realized that the entire audience was focused on him and his reactions–that he was dictating the entire tone of the show like Queen Victoria watching Shakespeare at the Globe–so he quietly stood up and removed himself to the back. He didn’t need the focus; he wanted the night to be mine. It had absolutely nothing to do with the fact that he left the show altogether five minutes later, following a string of jokes that didn’t land. It did not reflect his awareness that by heading to the back, he would be closer to the exit, and could slip out the door when a waitress came through with a tray of drinks. It was not a sign of his realization that he would rather be anywhere on earth that wasn’t a place where he could hear my jokes. His parting whisper to Frankie of, “dude just venmo me for the bill, I can’t fucking take another second of this,” were part of a running gag we have.

It was, instead, a gesture of humility, magnanimity, and respect from one of Barstool’s strongest pillars. And for that, he truly is the biggest cat I know.

PS- I wrote all the italicized jokes for this blog today. I’ve never performed them. But I’m fairly sure they’re better than 99% of my actual jokes, so if you hear me do them on stage, just act like it’s new.