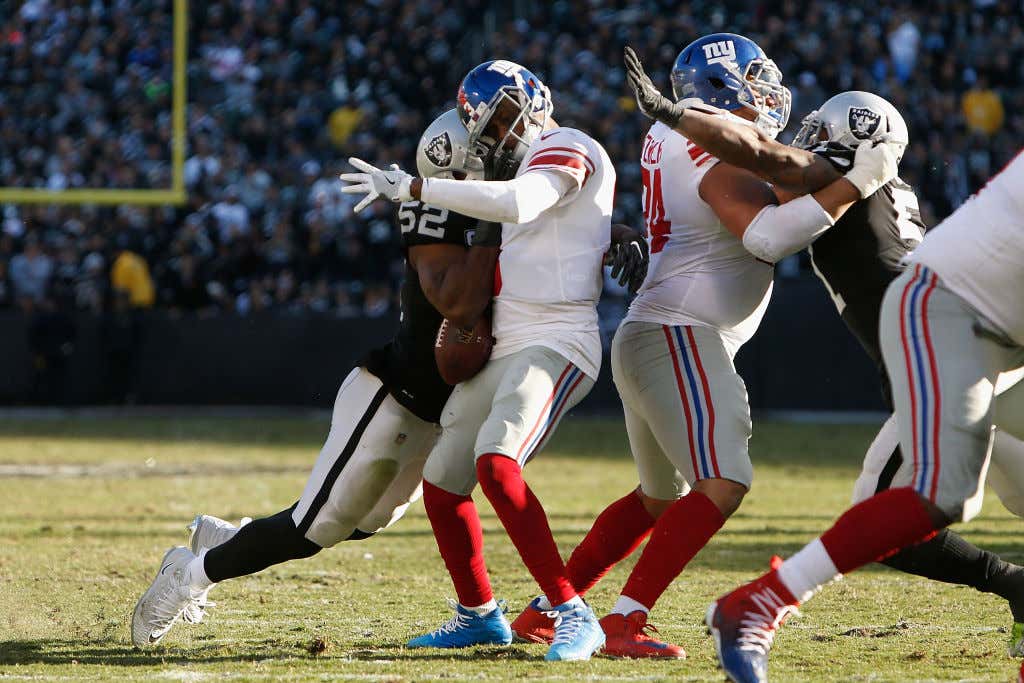 The Jets have reached out to the Raiders regarding a possible trade for holdout defensive end Khalil Mack, according to Manish Mehta of the New York Daily News.

The reports started to come in yesterday afternoon and I was immediately overcome with  totally reasonable and rational thoughts about what a move like this would do for our defense and roster as a whole. Let’s be honest, Khalil Mack is the best defensive player in the entire NFL.

In 2015, Khalil Mack became the first player in NFL history to be named 1st-team All Pro at TWO different positions as a DE and OLB. Think about that one for a second.

Take a look at his stats over the first 4 years of his career.

3 Pro Bowl seasons. 2 1st-team All Pro selections. 36.5 sacks in his last 3 years. A total fucking stud. No one is denying how dominant Khalil Mack has proven he can be in the league. I get that. I just wanted to get everyone on my level in terms of excitement thinking about the possibilities here.

The reports also stated that at least a dozen teams have also contacted the Raiders about working on a deal, so it’s not like we’re the only fanbase drooling over the idea, but I think it’s reasonable to make the argument that we’re in the best position to make a deal happen, and have the most to gain in doing so.

The important question is obviously this: What will it take for the Jets to pull the disgruntled Mack away from Oakland, and is it worth it?

On the surface, it’s hard to get an idea what it would take to make a deal happen with Oakland. Mack is in the last year of his rookie deal (Oakland exercised his 5th year option for this season in April 2017), so technically they could hit him with the Franchise Tag next season if they manage to ever get him back in the facility. It’s not like MLB or the NBA in the sense that Oakland should feel pressure to move him because they know he’ll walk as a free agent once his rookie deal is up.

That being said, you’re talking about the best defensive player in the league who has made it very clear he doesn’t want to play for the Raiders without a long term commitment. But apparently his reps haven’t had any contract discussions with Oakland for months, so you’re now looking at a situation where they’d have to keep tagging him year after year which would only piss Khalil Mack off even more. All in all, the circumstances just kinda cancel each other out. So from the Jets perspective, you’re still negotiating uphill with a team who knows they have one of the league’s elite talents under contract.

Check out Khalil Mack’s highlights from his 2016 Defensive Player of The Year season:

With that in mind, I think it takes at least next years 1st round pick + a future pick in the top 3 rounds OR multiple picks in the later rounds. If that’s what Oakland wants, it would be asinine for Mike Maccagnan to sit on his hands and not pony up the offer.

If you’re looking at the Jets roster composition headed into 2018, we’re in a great spot to make a deal like this. First and foremost, we have Sam Darnold on a 4-year rookie deal + a 5th year team option, so we’re not gonna have to pay him top-tier QB money for a bit. Beyond that, we have more than enough cap room given our limited committed money beyond 2018. So if it got to the point where the Jets were able to negotiate with Mack’s team about a long term deal we could certainly make it happen.

Even more importantly, adding Khalil Mack to our defense already well equipped with young talent would immediately take it to an elite level. Mack is not only exactly what our defense is missing as a true threat off the edge, he’s on an entirely different stratosphere of the category as a whole. He’s the kinda player that keeps opposing QBs up late on Saturday nights, and that’s really not hyperbole. Offenses have been building their game plans around containing Khalil Mack for 3 years because if you don’t locate him pre-snap on every single play, he’s gonna fuck things up. And he’s not a one trick pony either; he’s been one of the most effective run stopping DE/OLBs in the league his entire career as well.

Putting Khalil Mack on the outside of the Jets defense would immediately make him the focus of opponents game plans, taking a ton of pressure off Leonard Williams and allowing him to get back to being one of the more dominant interior DL in the league. All of a sudden you’re looking at a defense lacking any true weaknesses.

If you’re still worried about the Jets mortgaging their future after everything I just said, think about it like this. Adding Khalil Mack to this defense cancels the future. The future becomes now. We’re still sitting on Teddy Bridgewater and he could be used as a chip to get back some of the draft picks we’d lose in a potential deal for Mack. We have the cap space to pay Mack long term and still load up on talented veterans to push for the playoffs throughout the duration of Darnold’s rookie deal.

If we attack the offseason following this year with the intentions of finally solidifying our O-Line, both through the draft and free agency, we’d put ourselves in a position to win immediately and for years after. Despite what the mainstream sports media and Twitter reporters are saying, this roster isn’t as far from contention as people want you to believe. Mike Maccagnan has shown us since the day he became the GM that he’s not afraid to be aggressive when the opportunity arises, and he should absolutely double down on that now and do whatever he has to do to get Khalil Mack in green and white.

This is fucking New York, a town not known for it’s patient fanbases, and there’s no better time than now to make a blockbuster move that would immediately put the Jets back into contention. The fans (especially me) are already giddy with optimism as our record sits at 0-0, and a move like this would do wonders for further energizing one of the more emotionally damaged fan bases in the league.