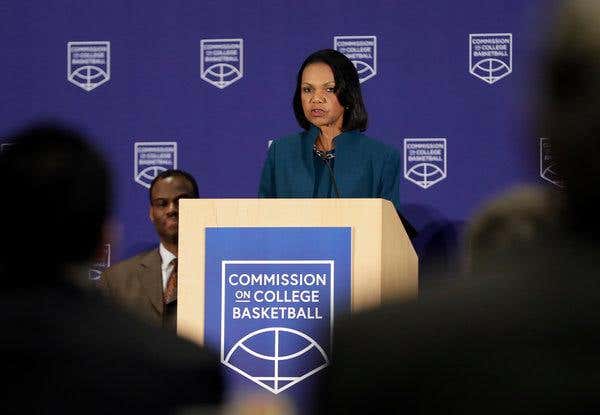 CBS is currently running its Candid Coaches series and it’s one I always find fascinating. They go through a bunch of different topics from overrated coaches to players you most want on your team to the best team, etc. Well, the most recent one looks at the Commission on College Basketball and if it will actually make any changes to help the game.

Now let me put on my shocked face here. 92% of the coaches polled say no it’s a pointless commission that won’t do anything. You know, like most people who are around the game believe. Let’s start with the most glaring issue. Here’s what I wrote back in October of last year:

I have a lot of problems with this so we’re going to through one by one as I try to vent here. First off, how about the fact they have hardly any former players, any recently former players or people associated with grassroots/AAU recently?

Here’s what a coach said to CBS:

“Who’s on that commission that’s actually in the game right now? So how do they not contact a Bobby Hurley — or guys who played at the highest level collegiately and currently are college coaches — and get his opinion on what’s going on and how to correct it? David Robinson. Grant Hill. Those are guys 20-plus years removed from what goes on in college athletics now. They couldn’t function as a coach in this environment because of what they haven’t experienced. This is going to make people go back to the old days with “hand-to-hand combat.” You used to could get a shoe company to do your dirty work. Now that’s taken away. So now it’s the old days again. ‘Meet me somewhere, here’s your money,’ and move on.”

It never made any sense. They went with people that don’t know the sport to try and fix the sport. That doesn’t work. Instead they pandered to the NCAA and Mark Emmert, who made them essentially work for the NCAA. It made absolutely no sense. You need to have people who know the sport and more importantly know the grassroots portion of it to be involved here.

The second quote that stood out and one talked about a lot was this one:

“I highly doubt they’ll fix anything. We have a system where some coaches and schools make millions, but the players are not allowed to get any money.  We have a system where head coaches that have had staff members get arrested less than one year ago get extensions and raises from their administrations. I don’t think anyone really wants to change the system. And, unless those two things change, the problems of corruption will exist.”

I can’t stress this enough. The NCAA needs to look inward – which is a joke because the NCAA has no idea how to do anything but blame others. They need to update what amateurism means. The rulebook is dated. The definitions are dated. We’ve never seen college sports be as profitable as they are right now.

So, I say it all the time, you can’t just pay the players. That shouldn’t be on the school and I agree that getting a scholarship is a great bonus for them. You also have to factor in Title IX and the legal issues with paying a player from the school. HOWEVER, you have to let them profit off of name, likeness and image. Take it out of the schools hands. If Joe’s Tavern wants to pay RJ Barrett this year $1,000 to put his face on a billboard, let him do it. Who does it hurt?

Let’s be honest here. Some players are more valuable and worth more than others. Anyone with a brain knows that. So the 12th man at Duke or Kentucky shouldn’t be hurt when they aren’t getting offered to be on an ad but PJ Washington and Zion Williamson are.

All in all, this voting and series was very telling. College coaches and players have no faith in the NCAA and the Rice Commission. It was a massive waste of time and will continue to be until the NCAA takes on some of the blame and looks at its own rules. The coaches have spoken. Now make some real changes.