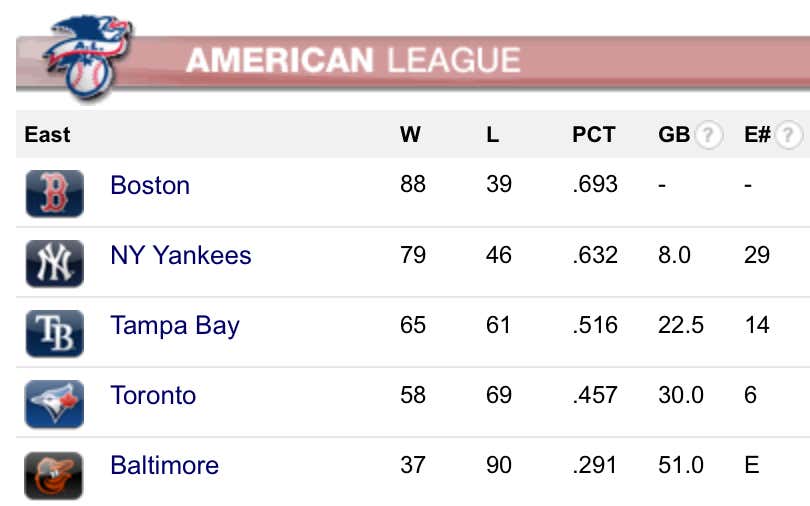 We’re not even at the end of August and the Orioles just got their 90th loss of the season. 90. A decent amount of teams won’t sniff 90 losses in a season, we’re looking at a record of 37 – 90 with more than a month to go, thats a cooooool .291 winning percentage. If you stretch that winning percentage out over a full season, that would be a record of 47-115. They just got swept in Toronto and somehow went 0-10 in Toronto this season. Yesterday’s loss was particularly funny because of how good David Hess looked through 7 innings. How often do you see a team have their starter go 7, give up 1 run, and then they lose 6-0. That is what happened yesterday. You’d think they’d at least be in the game, but no, not this club. They have an off day today, but welcome in the Yankees for four this weekend, that should go well.

This team is 51 games back in the division of the Red Sox, 39.5 games back in the Wild Card, and have officially eliminated from playoff contention. The Orioles have 35 games left this season and to get to 50 wins they have to go 13-22 to close out the season. I don’t think there is anyone in Baltimore or in baseball that thinks that will happen. They could go 25-10 over their last 35 games and still lose 100 games. Baltimore hasn’t lost 100 games in a season since the dreaded 1988 season when they went 54-107, the team that started out the season 0-21, but let’s be real, this team isn’t winning 54 games. Through 127 games, the 1988 team was 44-83.

Since the All Star Break last year, they have gone 70-131, that breaks down to a winning percentage of .348, I’d take that in a heartbeat this year, but lets break it down a little more. Since the beginning of September 2017 when the Orioles entered that month at 68-66 and only 2.5 games out of the Wild Card, they are 44-111. They were right there knocking on the door of a playoff spot and then completely pissed down their legs, and it’s been a constant stream of piss ever since. 44-111 is a record I pray this team can get to this season, but that’s not even guaranteed.

I’m actually intrigued at which number will be higher, the Red Sox win total, or the Orioles loss total. That will be what I am watching for the last 5 weeks of the season. At least the Orioles have Cedric Mullins. I guess we’re still doing the #Quit4Witt, battling the Royals for the chance to draft Bobby Witt Jr #1 overall next year.