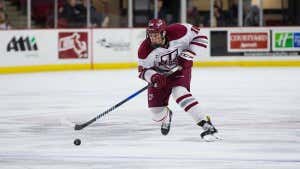 With the college hockey season rapidly approaching, I started to think about who are the biggest names in college hockey heading into the upcoming season. Over the next couple weeks, I’ll be looking at a bunch of players who will have an impact on college puck this season. First up, I decided to look at Quinn Hughes from Michigan, Oliver Wahlstrom from BC and Cale Makar from UMass Amherst.

Quinn Hughes is probably the biggest name in college hockey heading into next season. Drafted 7th overall by the Vancouver Canucks in the 2018 NHL draft, Hughes opted to return to Michigan for his Sophomore season. “it was unfinished business, of course. I want to win. When I look back at my season last year, I had a great year. But I didn’t win a national championship.” He told the Detroit news.

Hughes is a puck moving, undersized defenseman at 5’10’’ 170 lbs. But the Florida-Born dman has an offensive touch. In 37 games last season, Hughes put up 29 points, a Michigan freshman record. Very comparable to former Michigan dman Zach Werenski. And he put on an absolute show at the WJC, which i’m sure he’ll do again this season.

There are rumors that Hughes could even return for his junior season, to play alongside his brother and future no. 1 overall pick, Jack Hughes. Jack is a once in a generation player who has been compared to Connor McDavid.

Hughes will have himself a year this season on a pretty loaded Michigan team and don’t be surprised at all if you here Hughes named called come the end of the season at the Hobey Baker ceremony.

Oliver Wahlstrom may be the biggest name in the entire Freshman class. Not because he has decomitted and recommitted about a million times, but more for his antics as a 9-year-old.

Pretty insane this kid was doing this at 9-years-old. I remember watching this like it was yesterday. I think everyone who watched knew right then and there that this kid would be payed to play hockey someday. And he certainly will be, as he was drafted 11th overall by the New York Islanders in the 2018 NHL draft. Huge steal for the Isles. I was shocked to see Wahlstrom fall outside the top 7 or 8 picks, let alone 11. After the draft, Wahlstrom said the Rangers made a big mistake passing him over. Ballsy move. I love it. And Islanders fans should too.

At 6’1’’ 207 lbs, Wahlstrom combines his size and skill to be an offensive threat. Look for Wahlstrom to put up aton of points this year. The best coach in d1 hockey, Jerry York, will put him in the right position to succeed, which is why I think Wahlstrom made a great choice decomitting from Harvard to play in the hockey east with the Eagles.

Cale Makar is going to dominate college hockey the season. The 4th overall pick in the 2017 NHL draft, kind of shocked everyone when he said he’d be returning to UMass for his sophomore season. Who can blame him, the Zoo is a blast. Makar put on a show at the WJC this year too and even got an invite to play in the Olympics with Team Canada, which he denied. How many people can say they said “No” to playing for the team Canada hockey team at the Olympics?

Makar can single handedly break the puck out of the zone on his own. His stick handling along with his puck possession are major assets to his game that don’t go unnoticed on a game at the Mullins Center. You always know when Makar is on the ice. Whether he is controlling the play with puck possession, taking the puck end to end or he is just making smart plays at both ends of the ice.

Makar has an extremely high hockey IQ as well and can provide both an offensive touch but can also be a sturdy defenseman. All signs point to Makar being a franchise defenseman someday, so if he opts to stay in Colorado, they got themselves a legit stud.

I’ll continue to look at more and more players who will make an impact on college hockey this season up until the season starts, so be sure to send any suggestions you may have over.