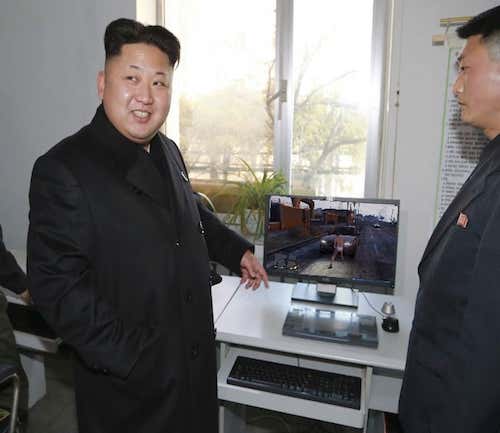 Korea Times- Foreign computer and video games are becoming popular among North Korean youth, according to defectors in Seoul. They say the games vary from “Grand Theft Auto 5,” “FIFA Online” and “Project IGI2″ and that “every one of” their friends played them when they (the defectors) were in the reclusive state.

The defector said it was uncertain where the games originated, although it is speculated they are being smuggled from China. Another defector said game lovers could play in a group by connecting their computers via LAN cables. “Being able to connect a LAN cable and play games means they knew quite a lot about computers,” he said.

Shit, did the Korea Times just completely debunk everything we thought we knew about North Korea? That place doesn’t sound like a vast, boring, technologically-deficient wasteland. It sounds like a college dorm room from the early 2000s that has one of the greatest video games ever created making its way through the school. Sure they may have the crazy RA that will occasionally kill people with anti-aircraft weapons for no good reason. But he usually saves the really fucked up shit for members of his inner-circle or his own family. If your country enjoys getting down with all the degenerate debauchery that comes with playing Grand Theft Auto, the place can’t be all that bad. And while we can now play games against anybody we want around the world using WiFi and gaming networks, there was always something to be said for the good old days of playing against your buddies in the same building using a LAN and being able to talk shit to their face instead of over a headset. I don’t know if it’s the nostalgia of my glory days talking or the general lack of doing anything fun with my friends now that we all have kids. But I kinda wanna go over to North Korea for a Gametime x Whoa That’s Weird collabo to steal some cars, kill some randos, and bang some hookers with Trevor Phillips all while breaking down cultural barriers between the East and West.