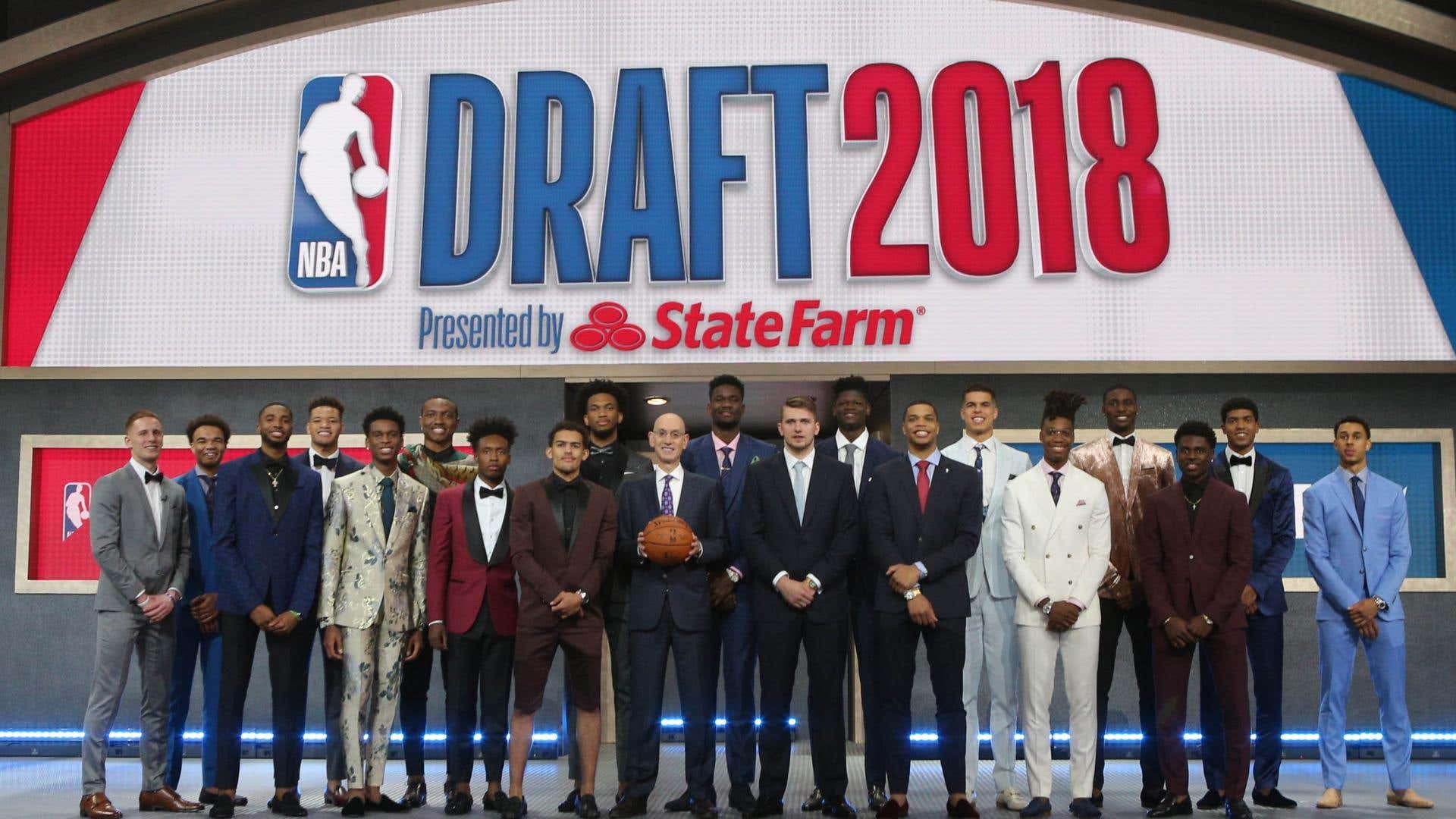 Every year NBA.com puts out the Rookie Survey. Every rookie takes part of the survey in which they vote on who will win Rookie of the Year, who will have the best career, who was the biggest steal of the draft, who is the most athletic, who is the best shooter and a bunch of other questions. It’s always intriguing to see how they vote among their peers and it’s worth nothing they’ll miss big time, getting the correct Rookie of the Year just once in nine years.

Rookie of the Year 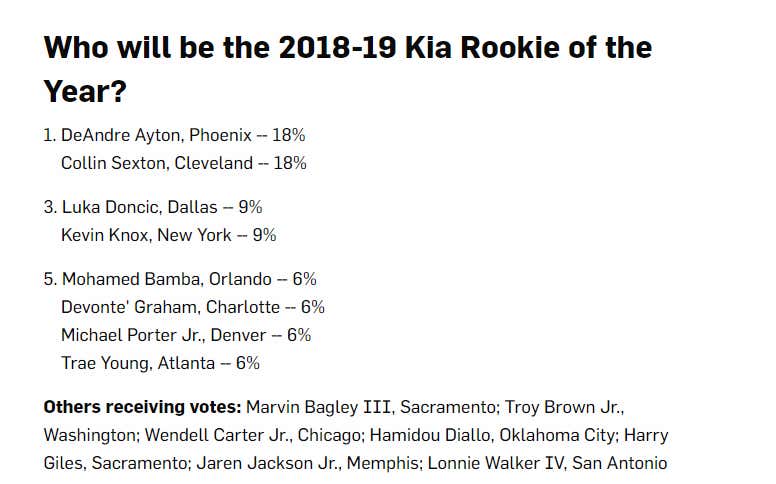 A bit of a surprise to see Collin Sexton up tied for first, but it’s not a surprise to see so many people receive votes and it being somewhat split. I mentioned that the No. 1 overall pick does tend to win Rookie of the Year so it’s not a surprise that Ayton was voted at the top. I am surprised to see Devonte’ Graham in the top-5 though. Is he going to see enough playing time with Kemba still there to win or even receive votes? The Knicks fan in me is trying to not get too excited about Kevin Knox, but this sure doesn’t help. 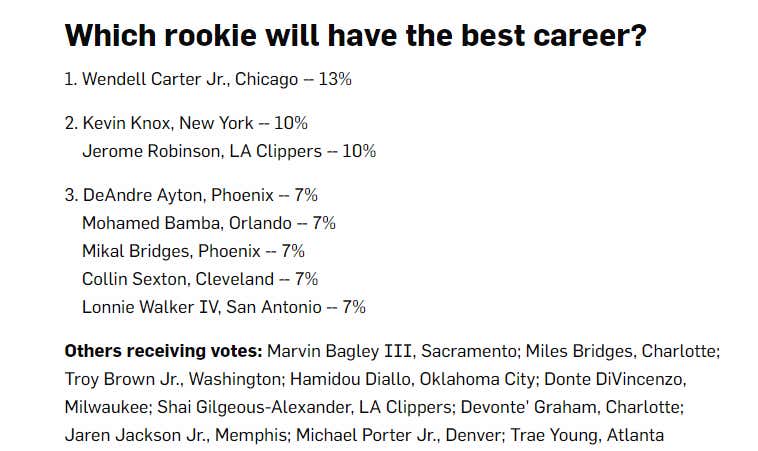 They’ve actually done a decent job in voting here and getting it correct. Throughout the 9 years they’ve voted Kevin Durant, Jayson Tatum, Blake Griffin, John Wall and Anthony Davis as the best careers. This year? A bit off the radar with Wendell Carter, who is a great player and essentially other rookies are voting him the safest play. That should make Bulls fans pretty damn excited as he’s known as being polished and being one of the smartest guys in the class. A bit of a surprise here though as Jerome Robinson is tied for second. Robinson, the Boston College product, really blew up this year and through the draft process to end up in the lottery. 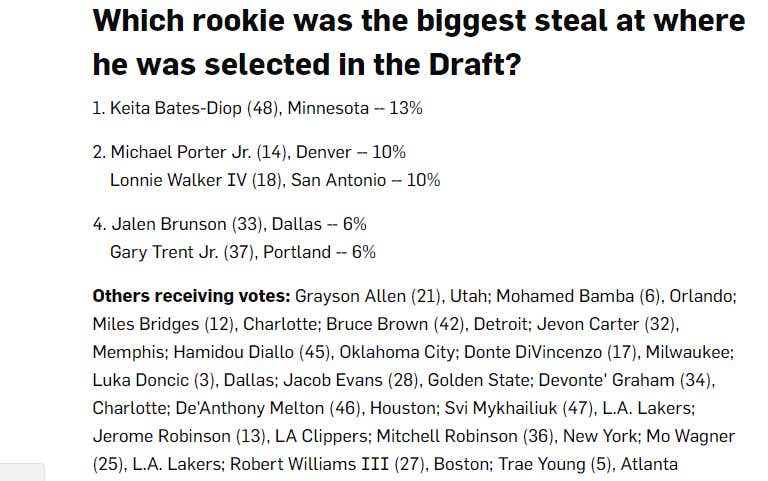 Keita Bates-Diop, the often-injured turned star at Ohio State wins this award and it’s really not a surprise. Bates-Diop was projected as a first rounder by most people so him falling all the way to 48 was a fairly big surprise. There are questions about his health and if he can stay in Thibs’ short rotation, but it’s probably the right pick here. I do think it’s no coincidence the first three names here (KBD, MPJ and Walker) all had injury question during the draft season.

Favorite Player in the NBA 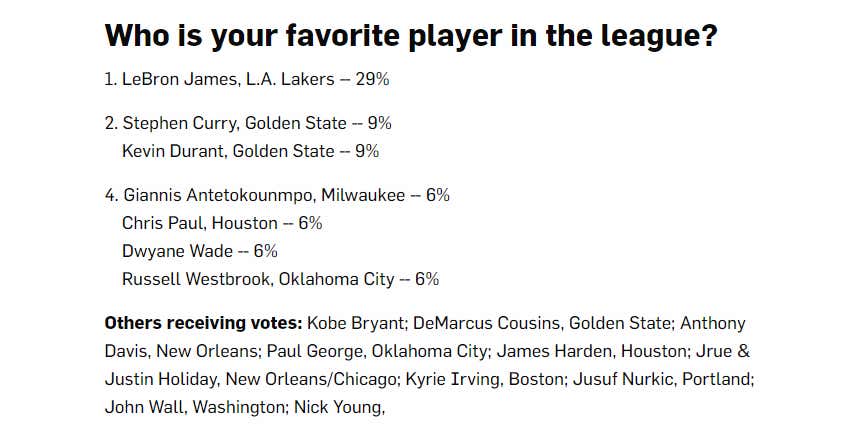 Alright, who the hell thinks Kobe is still in the league? Was it Doncic? He seems to be into older people with his Jennifer Aniston obsession? I’m thinking it was him. It’s no surprise that it’s LeBron though. There’s only been 3 people to win this vote over the last 9 years – Kobe, LeBron and Durant.

Trae Young is a popular pick among the rookies. He was a pretty clear winner in both the best shooter and best playmaker categories. Again, not necessarily a surprise that he won these, but the margin is absolutely a surprise. Playmaker is fairly broad, so it all depends what the other players are valuing.