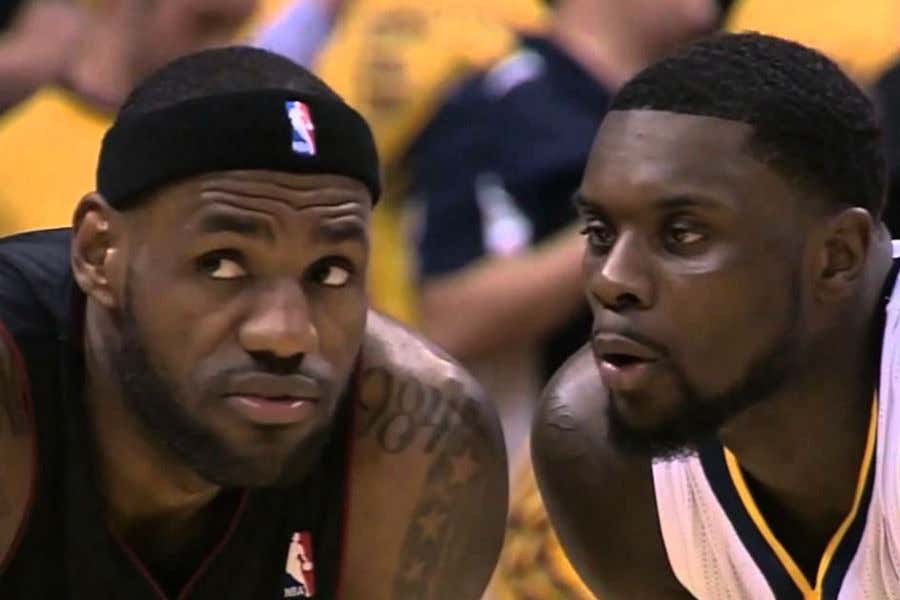 Since it was first announced that Lance would be joining LeBron in LA, immediately the basketball world went to this moment from back in the 2014 Eastern Conference Finals.

It’s obviously not news that Lance and LeBron have a bit of a history with each other, with Lance doing his best to try and throw LeBron off his game, and LeBron laughing and ultimately murdering whatever team Lance plays for. You can’t fault Lance for trying whatever he could think of to get into LeBron’s head, and this “feud” if you could even call it that has dragged on ever since that hilarious moment a few years ago. Well now that they’re teammates, Lance went on and opened up about what was going through his mind way back then

“I was really trying to get him mad, really trying to win the game, get him unfocused,” Lance said. “And I was trying anything, and for you to do something to somebody and they don’t respond, they keep continuing playing hard, it’s like: ‘yo, how do I…’ I was just trying to find stuff.”

I can only imagine the feeling after trying something so ridiculous as blowing into LeBron’s ear only to see it made literally no difference whatsoever. All it got him was a little smirk and shake of the head which is almost as disrespectful as that time Kobe didn’t even flinch when Matt Barnes pump faked throwing the ball at his face. If you remember, the only chance the Pacers had in that series against LeBron came in Game 5 when he dealt with foul trouble the whole night and only finished with 7 points (Heat lost by 3). That’s when this whole thing went down, so maybe it did work? Even still, James averaged 22.8/6.3/5.54 on 55% shooting for the entire series, so maybe Lance should have tried it earlier. This tactic wasn’t the only thing Lance tried, you may also remember his hilarious flop in Game 2 of that series as well

So now we’re all the losers because these two are going to be forced to get along. No more antics and Lance being a madman and as a basketball fan that makes me sad online. Even if deep down we always knew LeBron was going to come out on top in this matchup, the entertainment factor of watching Lance try and get under his skin is what made those series bearable. Part of me is holding out the Lance is some sort of mole and instead of blowing in LeBron’s ear, he’s going to get under his skill through poor shot selection and bone headed turnovers. I’m not ready to give up on this rivalry just yet OK?

I’m not going to enjoy having to hate Lance after he has brought me so much basketball joy through his outrageous play, but my hands are tied now that he joined the Lake Show. Sometimes we just can’t have nice things.