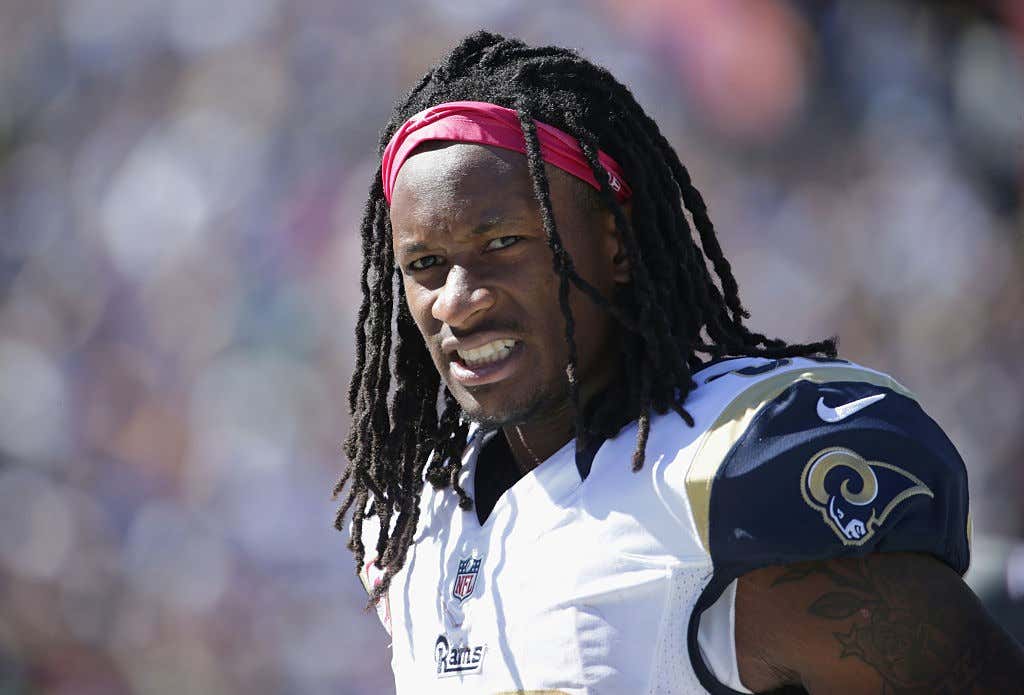 So the people at ESPN did a little Q&A session with Todd Gurley. They got into the typical stuff like if the Rams be a contender, how Sean McVay has helped Gurley as a player, and which LA team owns the town. But the most important part of the piece was about what Gurley dislikes.

What would you list as your dislikes?
Driving. Waking up early. And I hate ?dogs. I love cats, though. Cats are so cool. Actually, I’m probably gonna get some ?this year.
Sorry, you’re gonna get a bunch of cats?
Two, at least, so they can, you know, conversate or whatever. I mean, how would I feel if I was a cat and someone bought me and just left me by myself ?for like 20 years?
So, you’re the Crazy Cat Lady.
Yeah, I’ll be Cat Dude.

What a fucking casual bomb for Gurley to drop on the reader’s head. Gurley was previously a hero to normal people for confirming that all that “Money doesn’t buy happiness” nonsense was complete bullshit.

Gurley started that quote by being super relatable. I mean who doesn’t hate driving in (or hearing about someone complain about) LA traffic? I went to LA once and it was somehow even worse than advertised. The standstill I sat in for hours on my way to the Dodgers game actually cause me to forgive all the Dodgers fans I have given shit to over the eyars for getting to games late and leaving early. It’s a fucking nightmare that no fan should have to deal with on par with rooting for the Mets 162 games.

Hating to wake up early is maybe the most relatable thing in the world and the reason clicking play on this video will instantly make you sick to your stomach.

You could play that sound in a prison full of the most vile terrorists on the planet and they would ask for waterboarding instead.

So Todd Gurley casually adding in at the end that he hates dogs and loves cats is both shocking and disappointing. “Are you a dog guy or a cat guy” should be the first question NFL GMs ask players at the Combine and their answer should be at the top of the breakdown along with height, weight, and 40 time. Finding out a guy doesn’t like dogs, let alone hates them is bad enough. To find out that the same guy would willingly become a cat weirdo with a house full of cats, kitty litter, and sadness is enough to take him off my draft board altogether. You simply cannot trust a guy like that. Rams fans suddenly don’t feel as good about locking up a guy like this to a four-year, $60 million deal. And if you were debating between Todd Gurley and Le’Veon Bell for the first pick of your fantasy draft, I feel like you almost have to go with Bell simply because of this story. Maybe even throw Zeke, David Johnson, and Saquon over him too. Sure Gurley won pretty much every fantasy league for the teams that drafted him last year because he was a fucking MONSTER during the fantasy playoffs.

And yes we all know that the Steelers are going to run Le’Veon into the ground until he hits the Earth’s core. But you simply cannot trust someone that trusts a shady cat that will hiss and scratch you with its claws the minute you turn around yet somehow doesn’t love the companionship and loyalty of a dog. A man’s got to have a code.