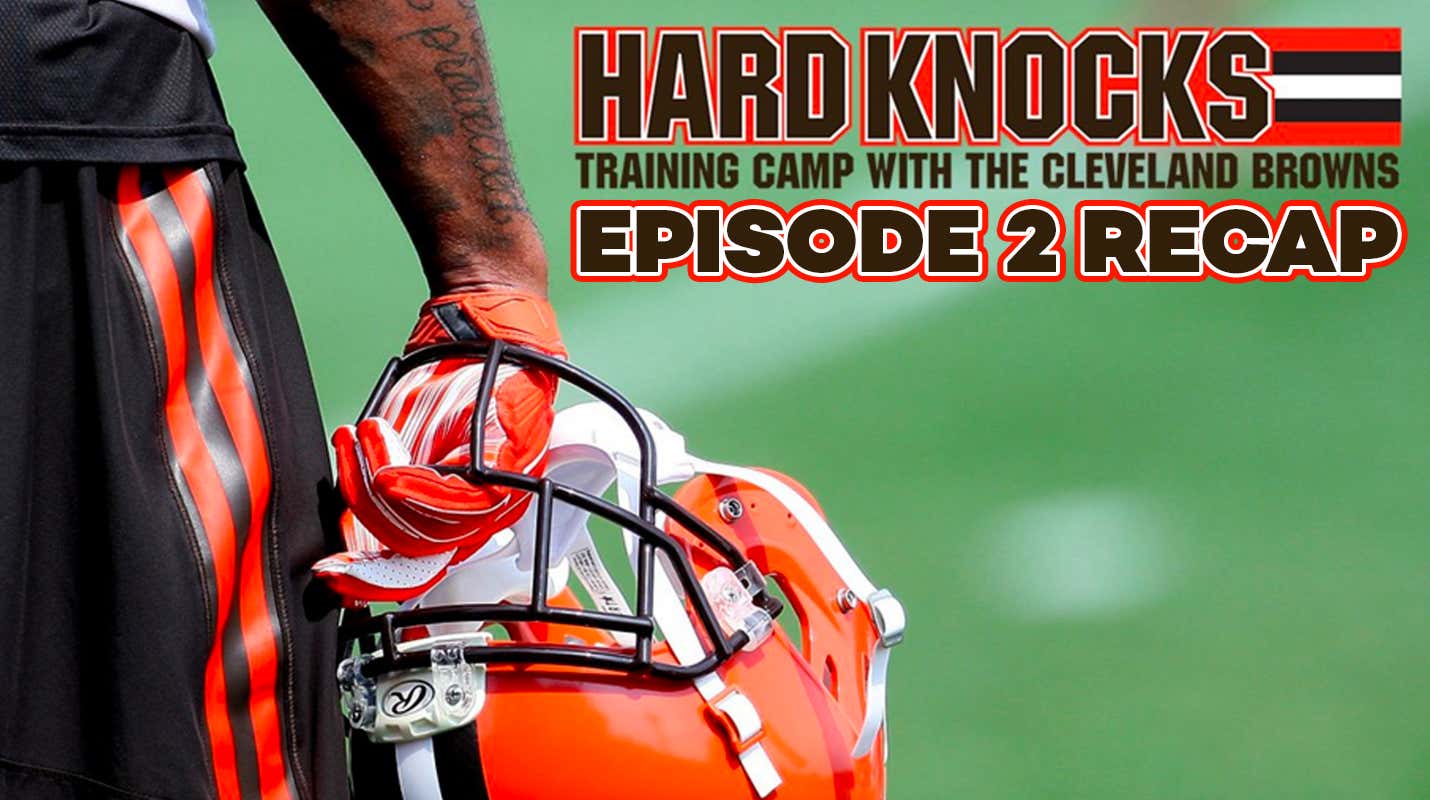 I watched this at 1 AM last night, so that’s my excuse for why this isn’t up in the morning as I promised last week. I messed up. Consider me the Corey Coleman of ‘Hard Knocks’ recaps. No more time to bullshit.

Not a great start to the show for Corey Coleman, who gets traded after this opening montage of terrible football and Todd Haley yelling at him.

HBO makes Corey Coleman look worse than they make Joffrey look during ‘Game of Thrones’. This following scene is one of the more intense and crazier ‘Hard Knocks’ moments I’ve seen.

Damn, the “why don’t you just trade me” line is pretty nuts. This is a failure, without question. The organization blew it with this pick. But I like the idea that they got rid of him because of his lack of buying into the system. I will say, I do feel bad for him, he clearly looks upset in Hue’s office and is on the verge of crying.

Just a killer line, “Here, we don’t need. Fuck out type shit” about Coleman being dumped for a 7th round pick.

The most intriguing storyline and arguably the star of this episode was rookie, Antonio Callaway.

Josh Cribbs is a fucking legend and I am so happy he is back with the Browns. I love him hyping up Callaway, because that is the type of motivation the kid needs. Also, I need to look back at the greatest kick return in regular season NFL history (I did not say playoffs, do not tell me I snubbed the Music City Miracle).

So half of the big episode with Callaway was about him getting pulled over and cited for a suspended license and marijuana possession.

The next part of his storyline was the game against the Giants.

Callaway looked like a guy who had it early on but was a just a little nervous. He had a few drops but was clearly outplaying his defenders. The second he got comfortable, he ran circles around the defense.

I am in the process of making a Browns shirt that features Josh Gordon (coming back soon, do not comment disputing this, otherwise you’re wrong), Jarvis Landry, Antonio Callaway and Dez Bryant and the shirt depends a lot on my assumption that Callaway will be a star. As Mike Mayock said in a flashback clip, Callaway would have been a first-round pick if not for the trouble he got in while at the University of Florida.

We got him! We finally found our “no-name ‘Hard Knocks’ player who will struggle to make the team.” Everyone shouts out his nickname and they laugh when he makes a play. Cajuste lines up with the stereotypical ‘Hard Knocks’ player of this caliber and standing in the league.

Not a great practice for the guy, but the storyline with his dad is pretty solid.

This is ‘Hard Knocks’ trying to get us emotionally involved. I’ll admit, they did it, because I am rooting hard for this guy. However, based on the footage, he has no chance at making the team. Or does he? This type of storyline always has the player taking a step back and then two steps forward in the team’s following preseason game.

I love this guy. He fought through an injury and managed to make some plays. ‘Hard Knocks’ found a way to do it again. One year it is Charles James with the Texans, Tyler Starr with the Falcons or Geraldo Boldewijn with the Buccaneers and now, this year, we have Devon Cajuste.

This was a huge episode for David Njoku

What a fucking genius. “I visualize myself making plays.” This dude is basically the Genie in ‘Aladdin’, because he just trashed the Giants a few days after this quote. We will get to those videos later. Njoku’s week actually got off to a bad start, or so he wanted everyone to think so…

I refuse to believe that Njoku had a bad practice. This dude wanted to get on the JUGS machine shirtless and flex on everyone with the montage.

This was Njoku’s “J.J. Watt moment” trying to show off how good he is at football. I really don’t care, because he is a fucking monster and he showed up against the Giants.

A big part of why Njoku couldn’t really show his worth last year was because DeShone Kizer never really trusted his big guys enough to just toss the football up and let them make a play. Luckily, both Taylor and Mayfield have that trust after one game.

Seems like Baker took the last episode of ‘Hard Knocks’ to heart because he showed up early to camp for the second episode. I love that he even got questions from reporters about ‘Hard Knocks’ and being called out by Hue Jackson. This just shows you how real this series really can be.

Man would it be a shame if Baker tore it up in their first preseason game!

Baker has that “it” factor and it is so damn obvious.

I question Hue Jackson a fair amount but didn’t think this was the worst episode for him. To be fair, he has had some terrible teams. You can tell because the happiest I have seen him in his time in Cleveland is literally a guy completing a 3rd down pass in the preseason.

I can hate on the guy all I want, but this just speaks volumes. Also, shout out to Tyrod Taylor for the idea to add the rolling camera at practice. Taylor went 5-for-5 with 99 yards and a touchdown in the Browns’ game against the Giants. Even if it is preseason, that’s still fantastic.

It’s not a ‘Hard Knocks’ season without an emotional moment involving a Browns player’s kid and a nice voiceover from Live Schreiber.

There isn’t much more to say about Jarvis Landry at this point. He is a monster.

I love all of the Dolphins fans who have chirped me trying to tell me Jarvis is a bum. He is going to be great with some big-time wide receivers and tight ends and a decent quarterback. I think he will be just fine.

I have hesitated the last two weeks to talk about Myles Garrett because I know he will have his moment to shine. He is a freakish, number one overall pick defensive end who loves poetry and dinosaurs.

I have to wait for his big-time episode. But his poetry scene was just a sign of things to come.

Damn, Nassib had a lot to live up to after that whole financial stuff from the last episode. Todd Haley and the quarterbacks making fun of his first name isn’t really ideal for his brand.

If not for him being a fellow Penn Stater, I might have declared myself out on Nassib after saying that Tony Robbins is his hero.

I cannot stand Tony Robbins one bit. Anthony Fabiano calling out Nassib on his 10% interest comment from last episode is fantastic.

Everyone celebrated the guy, but we needed a good devil’s advocate to call him out.

Todd Haley would scare the ever living fuck out of me. But I trust him on a level I don’t trust Gregg Williams to stay sane all year.

“Can we stay off the fucking quarterback!?” The guy is intense. He wasn’t the best head coach and had some issues here and there as a coordinator. But he was on winning teams and I just think he gets it.

I’m even more on board after his use of the inversion table. But what sold me was him telling Jarvis Landry that he needs to take Antonio Callaway under his wing.

Gregg Williams is a fucking lunatic.

I would never say any of that shit to his face, though.

John Dorsey loves Dez Bryant and you can tell by him calling him 29 instead of 30 and asking where he is on the wide receiver list.

Dez tweeting about the Browns was one of the cooler things with the team in a few years. I don’t care if it is not the Dez of old, it’s just the idea that people care a little bit about playing for the Browns.

The Brogan Roback train slowed down a fair amount, especially after getting made fun of for his first name.

He was in the preview for next week, though, so I think we get some more Roback.

HBO trolled the Browns and their fans about Odell Beckham Jr. with this episode.

There have been plenty of rumors about the two linking up, especially with how close he is with Jarvis Landry. This was a cruel troll and it got my hopes up a little bit about Beckham Jr. potentially going to Cleveland.

The Shop with LeBron James

Are you fucking kidding me!? They had to sneak this advertisement in at the end?

—
This was a great episode of ‘Hard Knocks’ and next week will surely be solid as well with the potential Dez Bryant and Josh Gordon storylines, as well as Corey Coleman playing against the Browns in their next preseason game. Also, again, this will be up earlier.