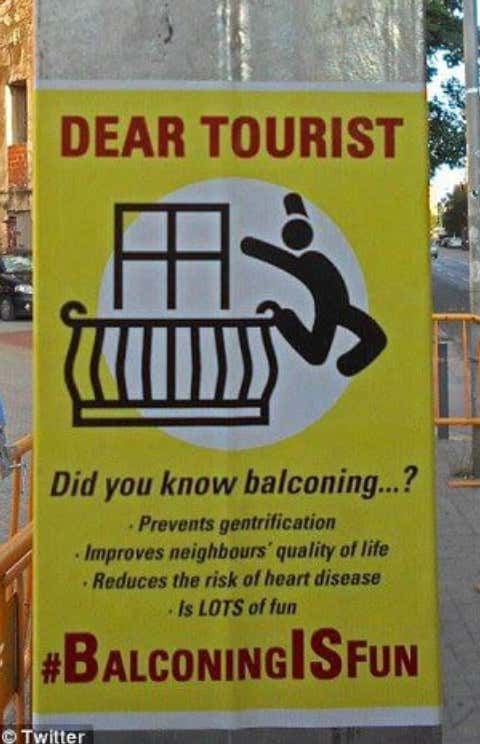 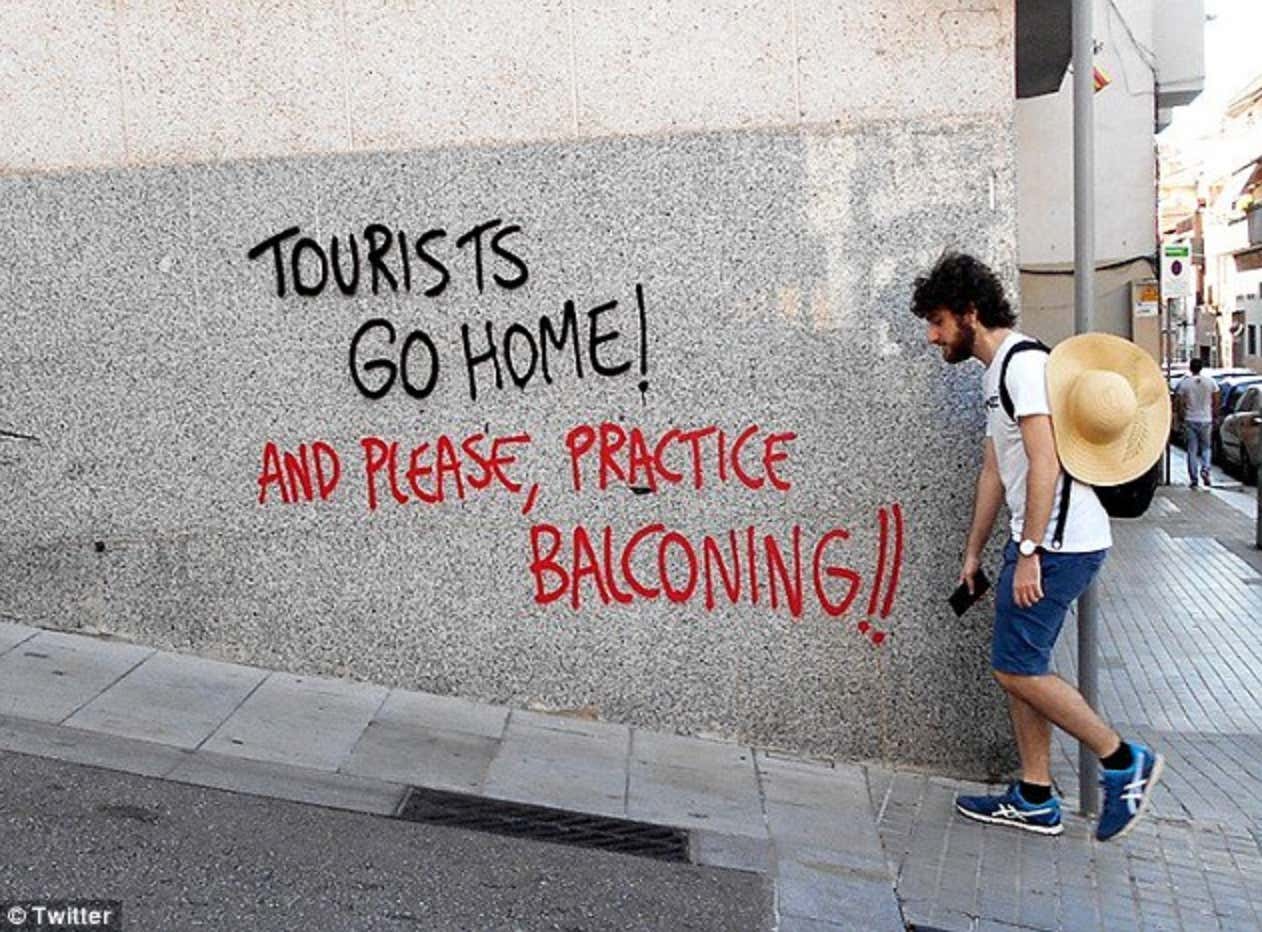 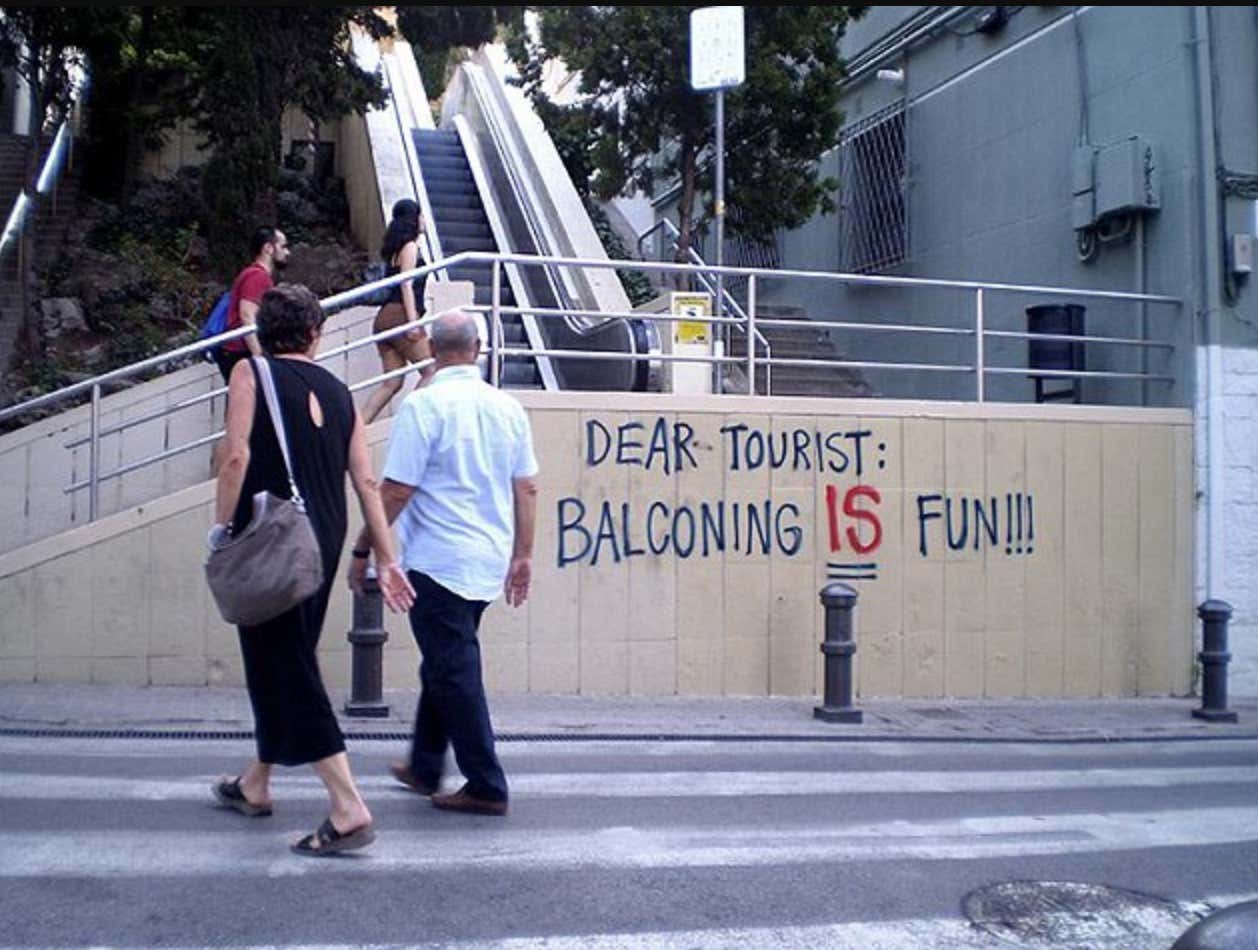 Daily Mail- Anti-tourist graffiti and posters encouraging visitors to jump to their deaths from balconies have been popping up across the Spanish city of Barcelona.  The posters proclaim that ‘balconing IS fun’, stating that it ‘prevents gentrification and improves neighbours’ quality of life’.  ‘Balconing’ is the practice of climbing between balconies or, if at a hotel, jumping into a swimming pool from a balcony.  A number of Britons have died after falling from balconies or walkways at hotels and holiday apartment complexes in Spain this year. Some of these deaths have been linked to ‘balconing’, and the posters and graffiti seem to mock the tragedies. This is only the latest anti-tourist protest in Barcelona, and comes just weeks after masked activists had to be cut free from a famous sculpture in the city’s iconic Park Guell.

People in Barcelona hate tourists huh? That’s the vibe I’m getting from those signs and graffiti. Like they hate them a lot. Other vacation spots complain about how annoying tourists are but nobody complains about tourists the way Barcelona does. You can’t even really call it complaining. It’s more taunting and threats. People in most places are like, “Ugh. It sucks having all these tourists around. I sure wish they would leave” and Barcelona is like, “KILL YOURSELF YOU STUPID TOURISTS! DO IT! JUMP OFF A BALCONY! IT’S FUN! DIE DIE DIE!” It was nice of the poster people to say “Dear Tourist” but everything after that is incredibly mean.

Hey Barcelona, maybe take it down a few dozen notches. If the people of Barcelona don’t like tourists so much then they shouldn’t live in such a cool place. That’d be like the residents of Las Vegas being like, “I HATE that there’s so many tourists here.” It’s selfish of Barcelona people to want Barcelona all to themselves. I’ll tell you this, those signs and graffiti aren’t gonna stop any tourists from going to Barcelona. No way. Tourists don’t give a fuck. Tourists will probably start taking pictures next to the signs and graffiti. They’ll think they’re sights to see. I hope Barcelona gets even more tourists just to piss off the poster people. Maybe they’ll just kill themselves.