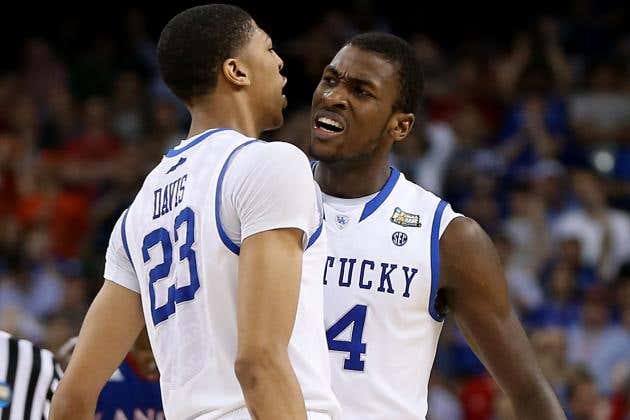 We’re moving forward with the August flashback by looking at the best duos in college basketball over the last 10 seasons. We hear about this quite a bit, but mostly when looking at backcourts or a guard/big PnR team. So this is going to be completely open. Just who were the best 1-2 duos in college basketball that brought success to go with their talent. Obviously there are a lot of ways to look at this, whether it’s combined points or combined defense or just filling the box score. So there’s no real formula here besides what I said earlier in terms of success + talent. So here’s who I have:

10. Gordon Hayward and Shelvin Mack (2009-10 Butler)
The two Bulldogs were vital in moving Butler to the 2010 NCAA title game as well as moving Butler out of ‘mid-major’ category. The two guards playing a combined 63 minutes per game while leading Butler in scoring. They played off of each other incredibly well too as Hayward was actually a somewhat terrible 3-point shooter during the sophomore year while Mack was a 40% shooter.

9. Trey Burke and Tim Hardaway (2012-13 Michigan)
Trey Burke won National Player of the Year while Hardaway was that extremely skilled wing that excelled in Beilein’s system. They combined to score 33 points while leading Michigan to the title game, which, yes still happened despite what the NCAA says. What’s possibly most impressive though is they played 87 and 83 percent of minutes throughout the season.

A year after losing in heartbreaking fashion to Villanova, UNC was able to make it back to the title game and win thanks to Berry and Jackson, who took over for Brice Johnson and Marcus Paige. They played a good majority of minutes with Jackson leading the way at 80% of minutes while also combining for 33 points per game. With Roy’s secondary transition offense, Berry and Jackson knowing how to fill lanes and both be shooters was vital in UNC’s title run.

7. Cody Zeller and Victor Oladipo (2012-13 Indiana)
Two guys who made it look like Indiana was back during the 2012-13 season. The Hoosiers took a jump in 11-12 as a No. 4 seed, but Indiana was a No. 1 seed in 2012-13 thanks to these two. Both finished in the top-10 in KenPom Player of the Year stats while ranking in the top-85 nationally in ORtg. They combined for 30 points per game while also being pretty damn good defensively as Oladipo provided that guard/wing defense and Zeller was a decent rim protector.

6. Tyler Hansbrough and Ty Lawson (2008-09 UNC)
The Ty’s came together to be one of the best teams of the last 10 seasons as Carolina went 34-4 and won a national title. Unlike the other names listed so far, they didn’t play as heavy of a percentage of minutes (both in the high 60s) but were the two leading scorers and ran the guard/big man spot perfectly. They led Carolina in scoring, combining for 37 points per game. Lawson had the best ORtg in the country that season while Hansbrough was No. 26.

5. Fred VanVleet and Ron Baker (Wichita State)
The undefeated regular season and No. 1 seed was in large part due to VanVleet and Baker. Two future NBA players filled the backcourt and then stuck together for the next three years. Really it’s just pick your year for these two as they played a heavy dose of minutes during their three years at Wichita together. In 13-14 they were 2nd and 3rd in scoring just behind Cleanthony Early while also being two 3-point shooters. These tend to be the guys you think about when you say college basketball duos, especially over the course of a few years.

4. Frank Kaminsky and Sam Dekker (2014-15 Wisconsin)
The Wisconsin duo that broke out during the 2013-14 Final Four run came together again in 14-15 to make a run to the title game. The two guys combined for 32 points per game in Wisconsin’s slower system. Kaminsky was also the KenPom Player of the Year (and National Player of the Year) while Dekker played a major role in beating Kentucky, most notably using the mismatch to score against Booker in the lane.

I have Wall and Cousins a bit higher than others that won a title, because of what they did for Kentucky as a whole. This was the first year of Calipari at Kentucky and his recruiting style was questioned in the Bluegrass State at first. Yes, the talent was great, but how would the one-and-dones gel? It worked well as Wall and Cousins were All-Americans who combined to score 32 points per game and make the Elite Eight. You can look at the success of Kentucky under Calipari and point back to this duo as a major reason why.

2. Jalen Brunson and Mikal Bridges (2017-18 Villanova)
It was tough picking a duo from this Villanova team, but Brunson and Bridges were just so damn good, finishing top-6 in KPOY voting. They also played off of each other well as Brunson used his drive and kicks to find Bridges for spot up shooting and then they’d alternate getting into the post. They combined to score 37 points per game, leading Villanova by a good number as the top-2 scorers. We know all about the success too as the No. 1 seed and winning the NCAA title.

1. Anthony Davis & Michael Kidd-Gilchrist (2011-12 Kentucky)
There may not be a better defensive duo than Davis and MKG in college basketball. Davis was an elite rim protector while MKG was the most versatile defender in the country. We know all about them offensively, how they weren’t the go-to guys necessarily, but that was more Calipari’s offensive design. What we saw them to do and dominate the defensive side of the ball while leading arguably the best team of the decade gives them the No. 1 spot.