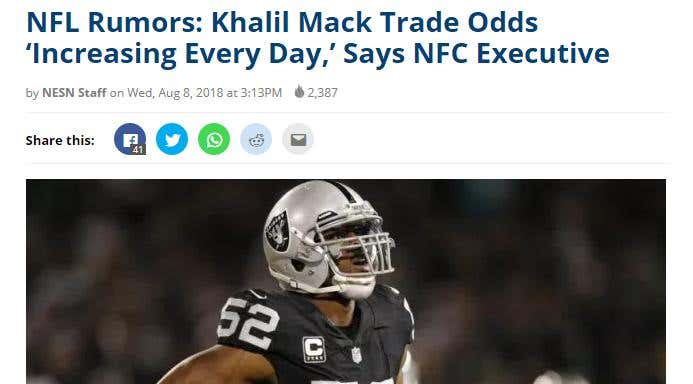 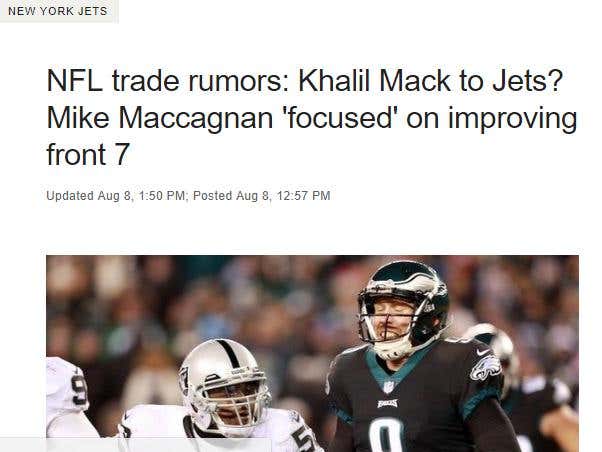 According to WIDE ranging reports on the internet, Khalil Mack is on the trading block. Not sure how legit these rumors are. To my knowledge, Adam Schefter hasn’t said anything about this, but that’s because he’s had me blocked on twitter for 5 years so I’d have no way of knowing. What I do know is that Ryan Pace should be calling those bizzaro twins Mark Davis and Jon Gruden to see if he is available.

The Bears have ONE glaring weakness on their defense right now(besides having a middle linebacker draft pick needing insurance in case he decides to be a dumb ass off the field) and that’s pass rush. Enter: Khalil Mack. All of a sudden you have the Monsters Of The Midway 3.0. Mack, Floyd, Smith, and Jackson. Those are some bad mamma jammas and the Bears would instantly have the ability to get after the quarterback which would make the entire defense better. They go from having a defense that looks on paper like a top 15 unit to one that IS a unit. It’d be a top defense. A defense that scares people. That’s what we need and love here in Chicago.

So then the question becomes what would you be willing to give up for Mack? I would give up almost anything. I won’t sit here and pretend to know how the NFL Salary Cap works. I don’t have a PhD in Math from MIT and I haven’t done a Franchise Mode in Madden since like 2013. What I’ve convinced myself is that the Bears would be able to afford Mack on a deal similar to that of Von Miller because they have a QB on his rookie contract. Makes sense to me. Don’t try to punch holes in that. Compensation for a young edge player who has already won player of the year honors…I’d start with the next two first round picks and then maybe add in some sweeteners. If that is the package then I wouldn’t blink. Those picks should be at the end of the first round because I am SO SO SO HIGH on the Bears and Mitch and Nagy and Pace and this fucking defense with Mack. Khalil Mack…no matter what!