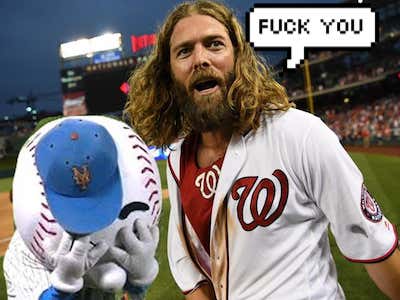 NY Post- Jayson Werth wanted nothing to do with the Mets. Werth fired his agent before spring training, and he said he called around to every team himself — except the Mets. He trained all winter only to find out many teams didn’t know he was interested in playing, he told the Howard Eskin Podcast.

“I had offers in November and I was advised by my former agent to wait — ill-advised, I guess,” Werth told the host. “Spring training came and went and by about halfway through spring training I felt like I was ready to play, so I took matters into my own hands. I called every team — you’ll love this — but one to try and get a job. “The only team I didn’t call? The Mets … I wouldn’t play for them.”

TALK THAT SHIT, JAYSON. TALK THAT SHIT!!! I’ll admit that the younger version of me would have gotten upset with Jayson Werth for this story. I would have called him Jayson Werthless and say he looks like a homeless person, had a good snicker to myself thinking about how much all of those mean words would upset him if I said them to his face, and go about my day.

But that was the old Clem. The dumb(er) Clem. The new Clem’s eyes have been opened. It is not Jayson Werth that I have beef with. It is not the Phillies, the Nationals, or their players that I should dislike. They are just doing their jobs of trying to win games. It is the Mets that inflict pain upon my soul. It is the Wilpons that cheap out on free agents and pocket David Wright’s insurance money instead of reinvesting it in the club. It is the PR team that constantly turns the smallest spark of a controversy into a four-alarm blaze of chaos and embarrassment. It is the Mets manager that allowed the team to bat out of order and the players that have played to a 36-64 record since the best start in franchise history to get us to the state of misery that we are in today.

Jayson Werth knew that putting the twilight of his career and his 39-year-old body at the mercy of the Wilpons and the Mets trainers would be suicide, Benny. Yeah I’m sure the years of being locked in a rivalry had something to do with it. But he usually came out on the winning side of those rivalries. The fact Jayson Werth swallowed his pride and represented himself by calling EVERY SINGLE TEAM IN BASEBALL except for the clown shoe franchise that was giving away money to old ass veterans that were probably washed up shows just how little Werth thinks of the Mets. And to be honest based on everything we have seen this year/all of our lives, who can blame him? Because while I would love to clown Jayson for turning down what likely would have been a decent payday as the Wilpons tried to once again cut corners at competing by putting a band-aid on the team’s festering wound of an offense, I am impressed at the level of respect he had for himself by not making that call. If only myself and the millions of Mets fans cared about our own happiness as much as Jayson Werth clearly does and could tell the Mets to fuck themselves.