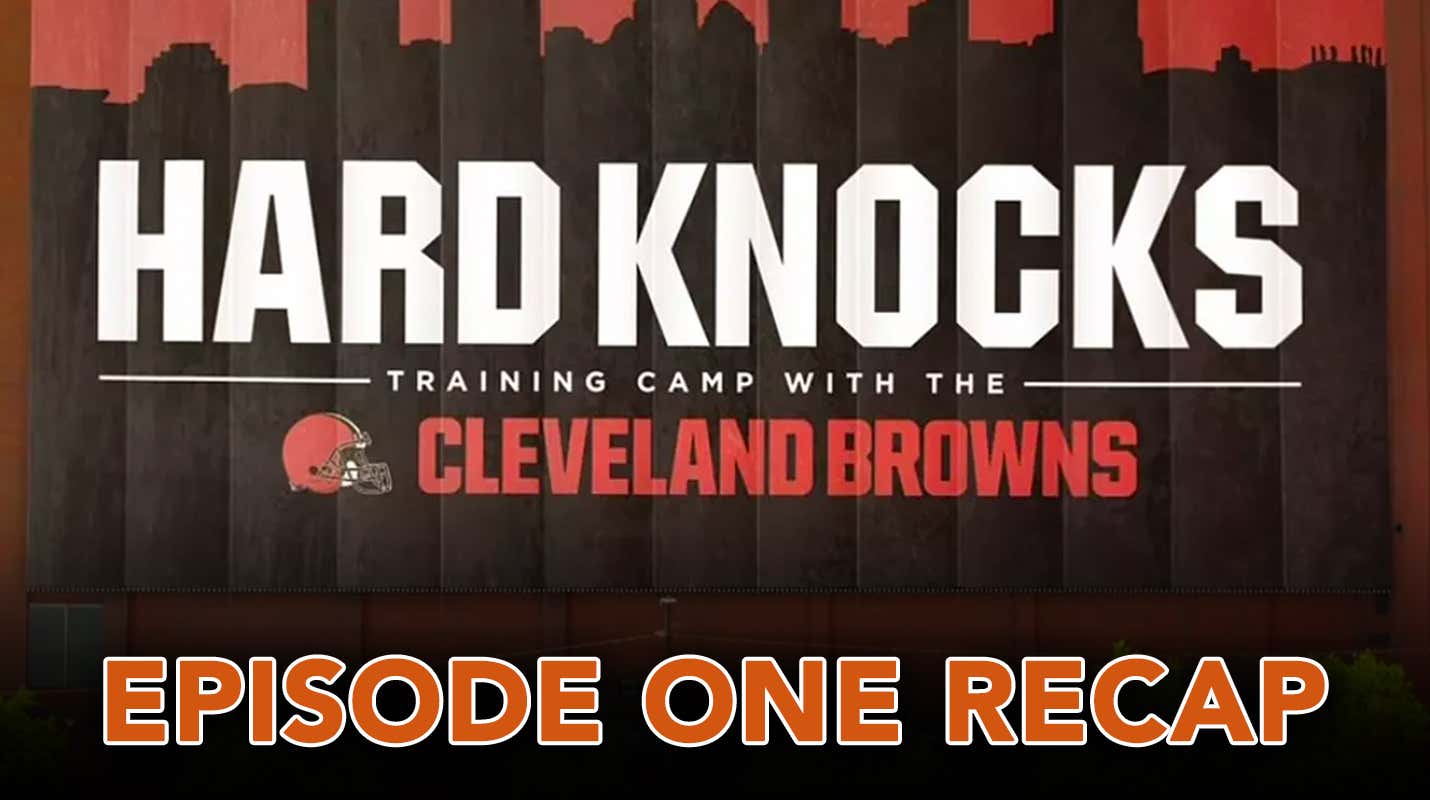 I am a Browns fan. *pause for laughter* I’ve decided I will be writing about them this year for my fellow Browns fans with weekly game previews and, before the season starts, recaps of ‘Hard Knocks: Training Camp with the Cleveland Browns’. Last night the newest season of ‘Hard Knocks’, easily one of the best sports shows on television, premiered and had some pretty great moments. Let’s recap episode one of ‘Hard Knocks’ with some clips and comments…

The LeBron James thing was pretty fucked up, man. I am not very bothered by LeBron leaving, he won Cleveland a title and can do whatever he wants. That doesn’t mean I don’t get a little sad when I am reminded he left, so to show the banner being torn in half was a bit much.

Now the actual ‘Hard Knocks’ intro, with the iconic music, was just absurd. They played up every angle of Cleveland being a blue-collar town as possible.

Everyone from construction workers to firefighters, delivery men and more were in the intro and it was just electric.

I love Baker Mayfield. I was Team Baker since a few weeks before the NFL Draft. Mayfield does have some things to work on, but my goodness does have incredible mechanics and accuracy. Dude just slings the football and I can’t wait until his career gets underway.

Tyrod Taylor is going to start this year and I hope Mayfield doesn’t play a single down. He needs a year to wait and develop, much like Aaron Rodgers or Jimmy Garoppolo. The issue will be the Cleveland media, which isn’t very popular amongst fans, partly because they sometimes act like fans. If they start calling for Mayfield to start, there will be some annoying drama.

Speaking of fans, they went nuts for him at practice as they chanted his name all day. I need to call out the guy in the orange suit, though. He was going a little too hard and fell into his buddy’s lap. That’s a bad look.

During a team meeting, Mayfield sang a horrible rendition of ‘Take Me Home, Country Roads’.

There was a lot of Baker Mayfield in this episode, with plenty more to come, but I need to touch on the now famous Browns QB’s RV.

I have to admit, I am kind of sick of the RV talk. It’s run out of steam for me and I hope it doesn’t take up much of the season. The Jim Halpert moment with Mayfield breaking the fourth wall was pretty great, though.

Rookie Nick Chubb arrived at the airport the same time as Mayfield and endured some pretty awkward airport conversations.

The first one was just absolutely cringe-worthy. Asking him who he plays for, guy? You’re in the Cleveland airport, where do you think he plays.

What a fucking legend already. There isn’t much more for me to say about his speech, but Landry’s speech to his fellow wide receivers was flat out awesome.

“All that weak shit don’t live here no more,” is such a “gets us” line for Cleveland sports fan. It’s true, too, if they want to turn the organization around they need to get rid of the laziness and complacency. On top of the great speech, Jarvis Landry is an animal on the field.

Jamie Collins and Christian Kirksey were speechless as they haven’t seen too many playmakers on the Browns in the last few years. I also love Landry’s one-handed medicine ball catch workout.

So long as Josh Gordon is back as expected, and Antonio Callaway avoids more run-ins with the cops (yes, this seems like not a guarantee in both situations), the Browns are going to have a stacked receivers corp.

John Dorsey is just a fucking stud. He’s going to have so many great moments and quotes during ‘Hard Knocks’, all of them involving his sweatshirt.

I already ordered the sweatshirt and will be rocking it all season. The Hue Jackson storyline, however, was pretty sad, as losing his brother and mother in such a short span is just awful. I have had my issues with Jackson’s coaching, but I wish nothing but the best for Hue Jackson the man and his family.

The dynamic between Jackson, new offensive coordinator Todd Haley and defensive coordinator Gregg Williams is going to be something to watch. This argument in a coaches meeting about players sitting out of practice and not dressing got really tense.

Oh, man, Todd Haley bit his tongue big time. This was a little worrisome because I’d like to see Hue Jackson take some other thoughts here and there, but he seems very set in his ways. I also imagine his “I’ve been in your chair” comment to Haley and Williams was pretty offensive for them as they were also head coaches.

Gregg Williams is a certifiable lunatic, which isn’t some sort of new revelation (see Bountygate). He took a lot of heat last year for lining Jabrill Peppers up 20 yards off the line of scrimmage, something they appear to still be doing in training camp. They haven’t addressed it yet, but we did get to see Williams lose his voice.

Okay, I am back in on the RV for now. Brogan Roback stole the show last night with his appearance.

Who the hell is Brogan Roback? Good question. I, along with others, have no idea.

We need more Brogan and I hope he becomes the typical small-time player ‘Hard Knocks’ star.

OTHER MOMENTS AND PEOPLE

Josh Gordon: The Josh Gordon moments were oddly encouraging. It seems as though they’re pretty confident that he won’t only be back but that he will be back soon. Recent images from Gainesville has shown that he is just working out with his team and advisors and trying to get his anxiety in check. Good for him. He’s a dynamic player and a huge part of what the Browns need. This comment was a pretty big gut punch, though.

You know what Liev Schreiber? Fuck you. (Not really, he’s an amazing actor) I also loved Todd Haley’s clearly irritated reaction to hearing Gordon wouldn’t be there for the start of training camp.

Earn Your Stripe: I don’t like this and think it’s pretty gimmicky and corny. Just give them their helmet stripes and tell them to not suck this year.

Look at this guy! He even reinforced his role as the football guy with this Helen Keller burn.

Carl Nassib: This was one of the most talked about scenes of the night. I’m not even sure if Nassib’s math was right because I am a big dumb idiot. But I still love the effort here.

The part where Hue Jackson gives him a hard time for his photo with Taylor Swift was perfect. I hope Taylor Swift takes a flier on Nassib and accepts a date request.

Bad Practice: It wouldn’t have been the Browns without a montage of terrible football!

The Corey Coleman comment from Haley is pretty interesting because the former first-round pick was traded just a few days later. I wonder how much of Haley’s distaste went into them trading Coleman away.

Overall it was a pretty decent episode overall and there were some things I didn’t even get to. Christian Kirksey had a good episode showing off his drumming and his “Why?” task asking his teammates why and who they play football for. The next episode will be great with a lot of storylines including Josh Gordon’s potential return, the Corey Coleman trade, Antonio Callaway’s marijuana issue and the Browns’ first game. Talk to you next week.

EDIT: These will be earlier in the day for now on. I recorded the clips and didn’t pick up the audio like a real dumbass, so I had to re-do all of them.