Content guys have a sponsor event this afternoon in Brooklyn that I am late for already, so not sure if I’ll be near my laptop for a Homestretch, but here’s another quick pop-culture history lesson to make you guys a little more interesting at dinner parties.

Not sure how else to intro this, but I will use the recent Death Wish remake as an opportunity to touch on an interesting little tidbit…

The new Death Wish movie wasn’t very good, and Charles Bronson lost his virginity at the age of 5.

Bronson goes on to say, “I remember my father had shaved us all bald to avoid lice. Times were poor. I wore hand-me-downs. And because the kids just older than me in the family were girls, sometimes I had to wear my sisters’ hand-me-downs. I remember going to school in a dress. And my socks, when I got home sometimes I’d have to take them off and give them to my brother to wear into the mines.”

“But, anyway, this was a Fourth of July picnic, and there was this girl, six years old. I gave her some strawberry pop because I didn’t want it; I had taken up chewing tobacco and I liked that better. But I gave her the pop, and then we . . . hell, I never lost my virginity. I never had any virginity.”

At five years old, I was pissing the bed regularly, and my mother still cut my meat.

Charlie Bronson was bald, chewing tobacco and banging broads even though he was so poor… “HOW POOR WAS HE!”… He was so poor, he had to wear hand-me-down dresses to grammar school.

Chew on that for a little while, you fucking loser, and peep this pic of CB in his prime with Jill Ireland. 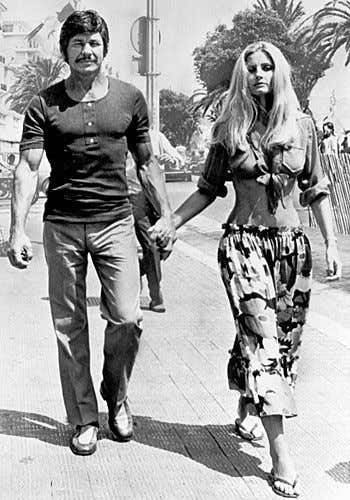 Now pretend that your eyes didn’t go directly to his cock, which looks nothing short of breathtaking.

To sum up… I am not condoning that kids start having sex at the age of five.  I am just saying that Charles Bronson did it, and then he went on to sully broads like Jill Ireland.

You didn’t, and some of the girls you went on to bang looked more like Robert Englund.