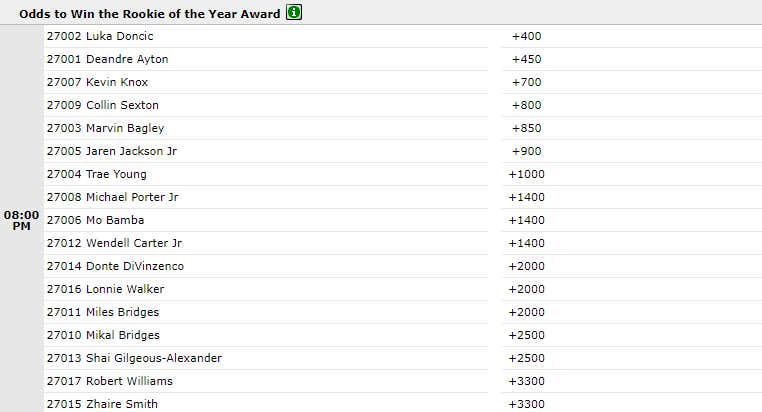 I got asked this in a mailbag the other week and decided to write more about it, with a look at the odds. It’s crazy to think that we’re only 2 months away from the start of the season, but it’s always worth looking at futures and hoping you land one or that you’re still bitter that you had Donovan Mitchell last year and Ben Simmons won Rookie of the Year in his second year. Either way.

So right off the bat you see that Luka Doncic and Deandre Ayton are the two favorites to win it. That’s not a surprise, especially when you follow recent trends. By that I mean just look at draft position. 9 of the last 11 winners were top-5 picks. 13 of the last 15 were top-6 picks. To go even further back 30 of the last 32 winners were top-10 picks. The only two outside of the top 10? Malcolm Brogdon (36) and Michael Carter-Williams (11). Simply put, don’t try to overthink this too much.

It’s also worth noting that voters don’t look too much into things. They look at the three basic stats – rebounds + points + assists per game = Rookie of the Year votes. They don’t necessarily look at team record or advanced stats. As Bryan Mears from Action Network pointed out add up those three and whoever has the most has won the award 15 of the last 18 years. Again, simply put, who will fill the box score?

Right off the bat there are 3 guys that I like to win Rookie of the Year. Unfortunately one of those is not Kevin Knox, because he’s going to win MVP, feel like it’s not fair for him to win Rookie of the Year too. In all honesty, I think Knox can lead rookies in scoring, but I’m curious to see how defenses react to him without Kristaps healthy. I think he can draw a bit more attention than some other rookies and he’s just a scorer at the moment. I don’t know how much he fills up the rest of the box score besides that and average rebounds.

So who do I like here? Well again, not going to overthink it. The first two are obvious. Deandre Ayton and Luka Doncic. Both are going to see serious minutes right off the bat and can do a bit of everything. The Suns will try to run their offense inside-out with Ayton and Booker, giving him plenty of touches. The biggest question mark there is who is running point for the Suns the majority of the time? Elie Okobo or Brandon Knight? Can they get entry passes into Ayton and let him work? There’s no doubt he’ll have plenty of rebounds and that translates. For Doncic, it will be how is he used within the Mavs offense? Will they let him run the high PnR allowing for more assists/points or do they put him more on the wing and let DSJ run that high PnR with Jordan more?

Finally, I like Shai Gilgeous-Alexander quite a bit given his odds. Picked at No. 11 he just misses the cut for that first qualifier based on recent history. However, he was viewed as a top-10 prospect by most outlets on draft day. He’ll have a role right away and not have to be the go-to guy with the Clippers. That allows defenses to not focus on him as much as they will Doncic/Ayton. From there he’s a triple-double threat and we saw that in college. He’s a strong rebounder for a guard. He’s a good passer and then can go get his own bucket. We’ll see him used in a bunch of different roles with Beverly/Teodosic/Robinson/Lou Williams all in the backcourt. The biggest question is how is he used there and will Doc Rivers let a rookie run?