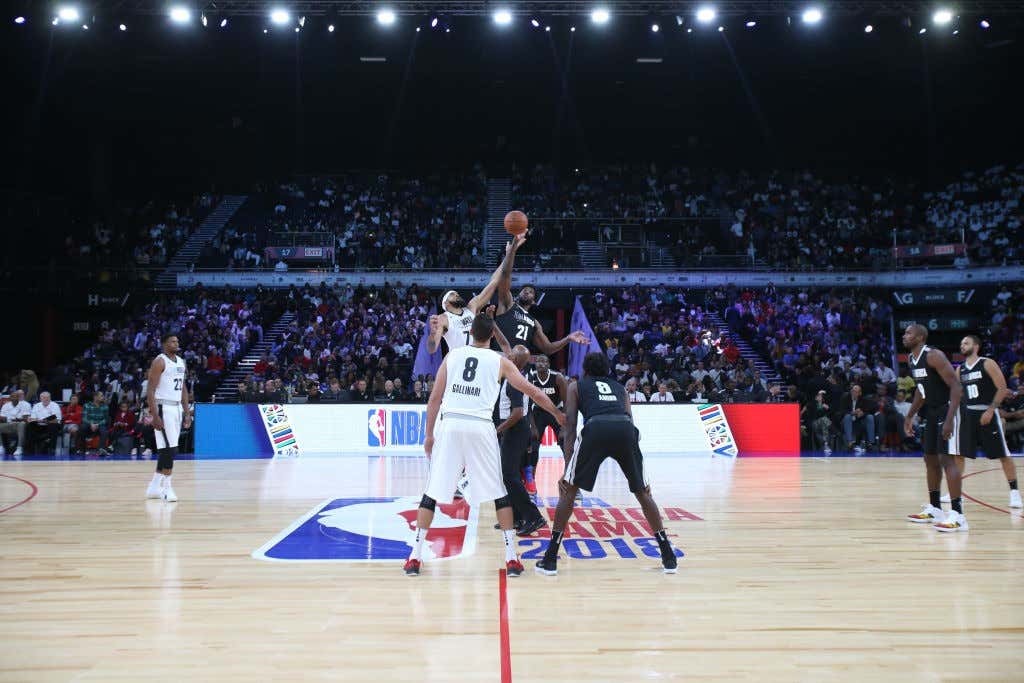 If you’re a fellow basketball junkie who has been dying for some basketball ever since the Summer League ended, well then today was your day. The 2018 NBA Africa game took place today, and before we get into what went down I want to remind everyone who maybe didn’t even know this was happening what the rosters were for each side.

Obviously this year’s game didn’t have the same sort of star power that we got in 2017, where guys like Jaylen Brown, Oladipo, Porzingis, Clint Capela, Drummond, Boogie, CJ McCollumn, Dirk, and Kemba Walker all played, but basketball is basketball and at a time in the NBA calendar when just about anything  will do, this for sure did the trick for me. The first thing you’ll notice about these rosters is there are no point guards. I’m not sure why that happened, I guess guys declined to play, and one the play started it was very apparent how much a legit guard was needed. I know the league is all about versatile wings who can do a lot of things, but to say this was beautiful basketball might be pushing it just a little bit.

Nonetheless, it was still basketball, and there were main rotation guys involved that may play for your favorite team. I was pleasantly surprised by some of the performances. If you’re a Clippers fan, you feel great about what you saw from Danilo Gallinari. The Clipper played just 21 games last year due to injury, but he came out and look healthy and effective right from the jump

He was by far the best player for Team World, finishing with 23/7/3 on 9-10 shooting in 27 minutes, and he gave us a little bit of everything. I feel like people don’t really remember how good Gallo can be when healthy, mostly because he’s never healthy. But in the world of stretch fours, Gallo when he actually plays can be a legit weapon. He has good range, can put the ball on the floor, and has good size at 6’10. With Blake gone I would expect a healthy Gallo to me a main focus of the Clippers offense.

He also was named the MVP of the game to shouts to him.

Another guy who stood out for Team World was Harrison Barnes, who Mavericks fans are surely hoping takes another step in becoming the #1 guy he’s being paid to be. He had a nice 14/11 and got off to a great start early especially from behind the arc

Barnes had a a career year from behind the arc last season, making a career best 1.5 3PM a night. If he can continue to be a legit option from deep, and bump his percentage up from like 35 to 38%, we could see him make a jump.

While these were really the only two guys you need to care about from Team World, others did have their moments, like new Laker JaVale McGee hitting a three

For Team Africa, of course the focus was on Joel Embiid. Not only was he the best player on the floor going in for either side, but it’s also the first time we’ve seen him play this summer outside of some Drew Hanlen videos. After a slow start in which he went 2-7, Embiid eventually found his footing and put on a damn show

To be honest I was surprised the Sixers let Embiid play unrestricted in this game, he even played in the 4v1 game against children in between the third and fourth quarter.

I’m obviously no Sixer fan, but it has to make them sweat any time they see him on the floor for anything whether it be a workout or a fake game like this. Fortunately for all of us that love basketball he made it out clean, and put up a very nice 24/6/4. It was honestly the Joel Embiid show in the final minutes, and to say he was unstoppable would be an understatement. BRUTAL turnover in the final moments though, can’t have that under any circumstances.

It was also good to see Luol Deng play well as this may be the only actually basketball he gets to play until next summer, as he had 14 points on 6-10 shooting.

Thunder fans were probably pleasantly surprised to see TLC actually play well, given everything we’ve ever seen from him on a basketball court had been a complete disaster while in PHI. He had 16 points on 50% shooting and certainly was leading the way to keep things relatively close for Team Africa late in this game.

Much like last year, things were fairly close the whole way, which really is all you can ask for. I’m not picky, the basketball can be terrible, but as long as it’s not a blowout I’m happy. Like every All Star type game they clearly picked up late in the fourth quarter when guys actually started trying for real. Things got down to 4 points with around 4 minutes left after Team World dominated much of the game, and it was here that you could really have used a floor general. They needed a ball handler in the worst way, because you know it’s bad when Rudy Gay is getting stripped by the corpse of Luol Deng because they have no idea how to run an offense. Things got even tighter with it being a 3 point game with 2 minutes left, and it was Gallo who hit the true dagger on a tough jumper. Fortunately Team World was able to hold on and pull out the win, as they remain undefeated in this exhibition event (3-0).

So like I said, maybe this wasn’t the best basketball any of us have ever seen, but it’s certainly better than nothing. Training camp/preseason will be here before we know it, so hopefully this scratched your basketball itch like it did mine.