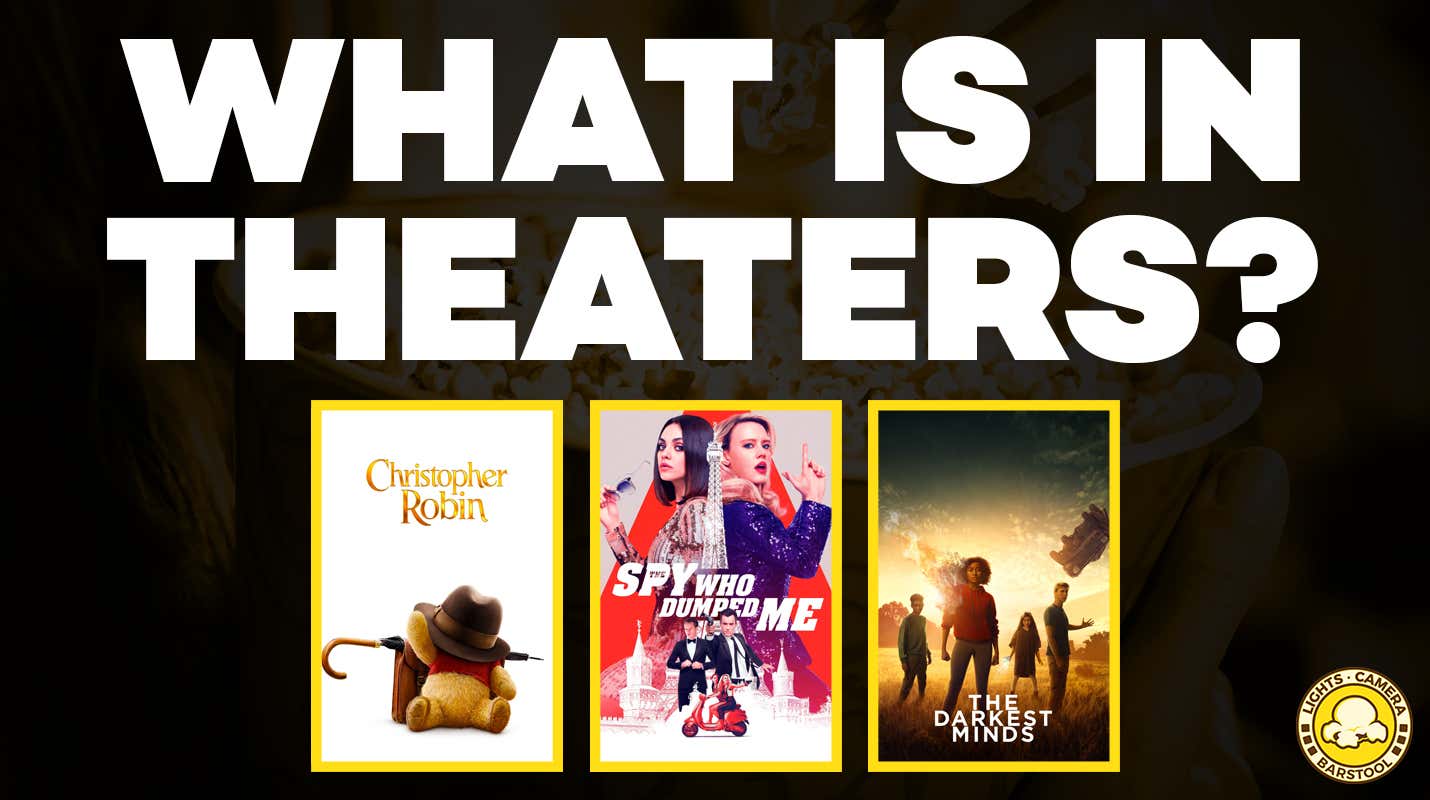 Going to start doing a weekly post about what is coming out in theaters for the weekend. Let me know if I should do these on Thursday or, like today, on Friday. As always, make sure to subscribe to our movie podcast, Lights, Camera, Barstool.

This is weekend has the most releases for the month of August, but let’s just say we’d have been better off with quality over quantity in this situation. It’s time to take a look at what will be in theaters for the weekend of August 3rd through 5th.

The ‘Christopher Robin’ release is rather strange, because reviews did not post on the big review sites until just after 6:00PM EST on Thursday. This means that people were already sitting down for the first showings as reviews and ratings were being posted online. That’s never really a good sign, at least critically, and the first Rotten Tomatoes score has the movie rated at a 63% approval and a score of 6/10. Not bad, but also not the most promising start for a movie that has received a ton of promotion.

I mean, look, let’s call a spade a spade, this is a fucking Winnie the Pooh movie and you know what you’re going to get. Obviously, it’s always nice when an iconic character or story is brought to the big screen with some weight and depth, but it seems this reimagining of Pooh and the gang is pretty basic.

Ewan McGregor and Hayley Atwell are awesome, so the cast is nice, and Brad Garrett is a lock on being a great Eeyore just based off of his voice and demeanor. The animation also looks incredible and those toys are about as realistic as possible.

I am sure ‘Christopher Robin’ will be nice story and a great watch with your family or on a date night, but I don’t think this is a movie that will blow many people away. We know Uncle Chaps is excited for this and he is even coming on the show next week to help review the movie.

What is this? Is this an X-Men movie? This looks like they took every young adult franchise and tossed them into a big pot. Based on the young adult novel of the same name by Alexandra Bracken, apparently, ‘The Darkest Minds’ will look to buck the long streak of less than mediocre young adult action movie releases we’ve had since ‘The Hunger Games: Catching Fire’ back in 2013.

There’s not much for me to say about this one other than that I can’t imagine the framework of the story being different than other franchises like ‘Divergent’ or ‘Maze Runner’. It looks like a dollar store comic book movie, as well. I know there are some pockets of people who don’t care for Marvel and/or DC movies, so I cannot imagine this being anyone’s cup of tea outside of the young adult population.

I watch every movie released during the year, so I will have to see ‘The Darkest Minds’, but this will be one I wait until it hits iTunes or YouTube, a great spot to legally (what’s up FBI) rent movies. The only thing that would maybe pull me into the theaters is the fact Josh Lyman himself, Bradley Whitford, is in the movie. I didn’t notice him in the trailer, though, so that won’t be happening.

‘THE SPY WHO DUMPED ME’

Oh no, no, no, no. The Beyoncé joke they make in one of the trailers is such a “how do you do, fellow kids?” moment. I think Kate McKinnon is very talented and I’ve always been a fan of Mila Kunis, but there’s no way this is a good buddy movie, right?

Everything feels so recycled from comedies like ‘The Heat’, ’21 Jump Street’ or ‘Spy’, with clichéd elements of the Bond and ‘Mission: Impossible’ movies. Comedies are very hard to judge based off a trailer, and I will never completely write a movie off based on that, but I can’t say I am looking forward to this nearly two-hour movie.

This movie also uses Paris as a setting only a few weeks after ‘Mission: Impossible – Fallout’ did the same with incredible set pieces and real, practical effects and stunts. That’s a pretty tough act to follow.

Side note: Justin Theroux has a such a weird filmography, having executive produced and written ‘Tropic Thunder’ and been a writer for ‘Iron Man 2’.

This is an interesting movie for the fact that a similar movie concept is coming out later this year. ‘The Miseducation of Cameron Post’ is about a young girl who is outed as being a lesbian and is then sent to a gay conversion therapy camp. Another movie coming out this year, ‘Boy Erased’, is also about a young character sent to a gay conversion therapy camp. That movie is called ‘Boy Erased’, starring Lucas Hedges (who has the fucking best agent in Hollywood), Nicole Kidman, Russell Crowe and Joel Edgerton.

The big difference is that, despite decent reviews, ‘The Miseducation of Cameron Post’ is not garnering much hype, while ‘Boy Erased’ has been tabbed as an early favorite for the Oscars. This movie was first screened at Sundance back in January and won the Grand Jury Prize of U.S. Drama, so it’s apparently a fairly decent movie. I am a big fan of Grace Moretz and think she needs some better roles (another victim of a bad young adult film), so seeing her expand her profile with a decent movie would be great.

Boy does A24 have a very distinct style for most of their movies. Another coming-of-age, slice-of-life and comedy-drama from A24, ‘Never Goin’ Back’ is reportedly a decent watch. The reviews so far aren’t over the top, but most people who have seen it agree it’s another solid effort from A24.

Most of A24’s movies, like ‘The Florida Project’, ‘Eighth Grade’, ‘Lady Bird’ and ‘Good Time’, as well as the upcoming movie ‘Mid90s’, have a gritty look to them. They always feel absurdly realistic and never have that glossy cinematic look to them. I usually appreciate this and think it adds to the style and feel of how the movie plays out.

This looks okay and will be something I see in theaters. Kyle Mooney is also in this one and, before his time on Saturday Night Live, he used to make some wildly awkward yet funny YouTube videos back in the day.

That’s not the best list of movies I’ve ever seen, but August isn’t usually a dynamite month for releases, either. It’s no January, but August isn’t a time of the year where you expect many big-budget tentpoles or Oscar contending releases. The most notable movies coming out this month, ‘The Meg’, ‘BlacKkKlansman’ and ‘Slender Man’, which all hit the big screen next weekend.

Which of these, if any, are you looking forward to seeing? Let us know and make sure to rate all movies from 2018 on a scale of 0-100 in the links below.