Well if you would have told me that the Orioles would trade Manny Machado, Zach Britton and then go on to win three straight (second time all season they’ve won three straight) against the Rays, I’d have called you a psycho. The Orioles also seem to be headed towards a new direction. Dan Duquette said in press conferences following the Machado trade that they are going to start signing International players, something they have NEVER done because of Peter Angelos. The club also said it will revamp their analytics department. They mentioned the “r” word, rebuild. Baltimore wants to go young the rest of this season and for the near future. This is a bit of a weird move, considering Dan Duquette is talking about the future of the Orioles, but neither he or Buck Showalter is under contract after this season. At least Duquette is saying all of the right things, now we wait and see if it all actually happens, and if he and Buck are the guys here putting this plan into place.

Even though the Orioles are the worst team in baseball, the show must go on. They welcomed Tampa into town after Boston was here, and boy is that what the Orioles needed. They dropped the first game of the series, and then put an absolute beating on Tampa in the next three. The Orioles went on to outscore the Rays, 37-12, in the next three games and won all three. It’s almost like they got better after trading Machado and Britton, hmm. It was a real offensive explosion this weekend for the Birds. A combined 45 hits in the 3 games. You had Trey Mancini going 4/4 with a homer on his bobblehead game, Chris Davis had his first multi-homer game of the season, Joey Rickard had 10 RBIs on the year coming into the Rays series and had 8 RBIs combined in the three games he played in, it was AWESOME.

Jonathan Schoop shined in this series, just like he has since his best friend, Machado was traded. In the Tampa series he was 7/21 with 3 homers and 8 RBI. He tied the record for consecutive games with a homer by a 2nd baseman with 6, and would have had the record if he didn’t have a home run robbed at the wall on Saturday. He’s been playing out of his mind recently after his terrible start and was just named the AL Player Of The Week. Since the All Star break he has been murdering the ball, a .368 average and 8 bombs.

This was only the second time all season the Orioles won 3 in a row and it brought their record to 32-74, not great! Regardless, now they have a plan for the future and it makes this terrible season a little easier to swallow. But seriously, I wish the Orioles could have played Tampa another 49 times this season, I don’t think they’d lose another game. Since Friday they are the best offensive team in the league, as well as just the best overall team. For a weekend in Baltimore, baseball was fun again.

On Sunday the Orioles traded another veteran with an expiring contract, reliever Brad Brach. He was traded to the Braves to help tighten their bullpen. In return, the Orioles got back….. $250K in International Signing Bonus money. This is something the Orioles never do, but look at them, changing their philosophy!!

Brach was REALLY good for them a few seasons ago, making an All Star team in 2016 when he had an ERA of 2.05 and a WHIP of 1.038. Overall he was a really good reliever for Baltimore, but this year he fell on his face. A 42nd round pick of the Padres a few years back, the Orioles basically traded a pack of sunflower seeds for him. From 2014 to 2017 he was 26-13 with 21 saves for the Orioles, he also had an ERA of 2.74 and a 1.133 WHIP. He filled in as closer last year when Zach Britton was hurt, and did the same this season. But as I mentioned before, he fell right on his face. He was 1-2 with a 4.85 ERA, 11 saves, and has allowed runs in 11 of 42 appearances this season. He just didn’t have it this season, and with an expiring contract, it was obvious he was going to finish this season outside of Baltimore.

What could they be using their International Money on? Well rumor has it they love Cuban Outfielder, Victor Victor Mesa. Yes, his name is Victor Victor. Hell of a name. He is the top international prospect on the market, and according to reporters, the Orioles are VERY interested in signing him. He’s a 22-year-old speedster who has decent power, and is an above average outfielder. A guy who I would love to add to this outfield in a few seasons with Cedric Mullins and Yusniel Diaz. I didn’t know who Victor Victor was 5 days ago, but now I can’t live without him. The Orioles literally haven’t signed any international free agents since 2008, 10 years ago, so this is the coming of a new age. 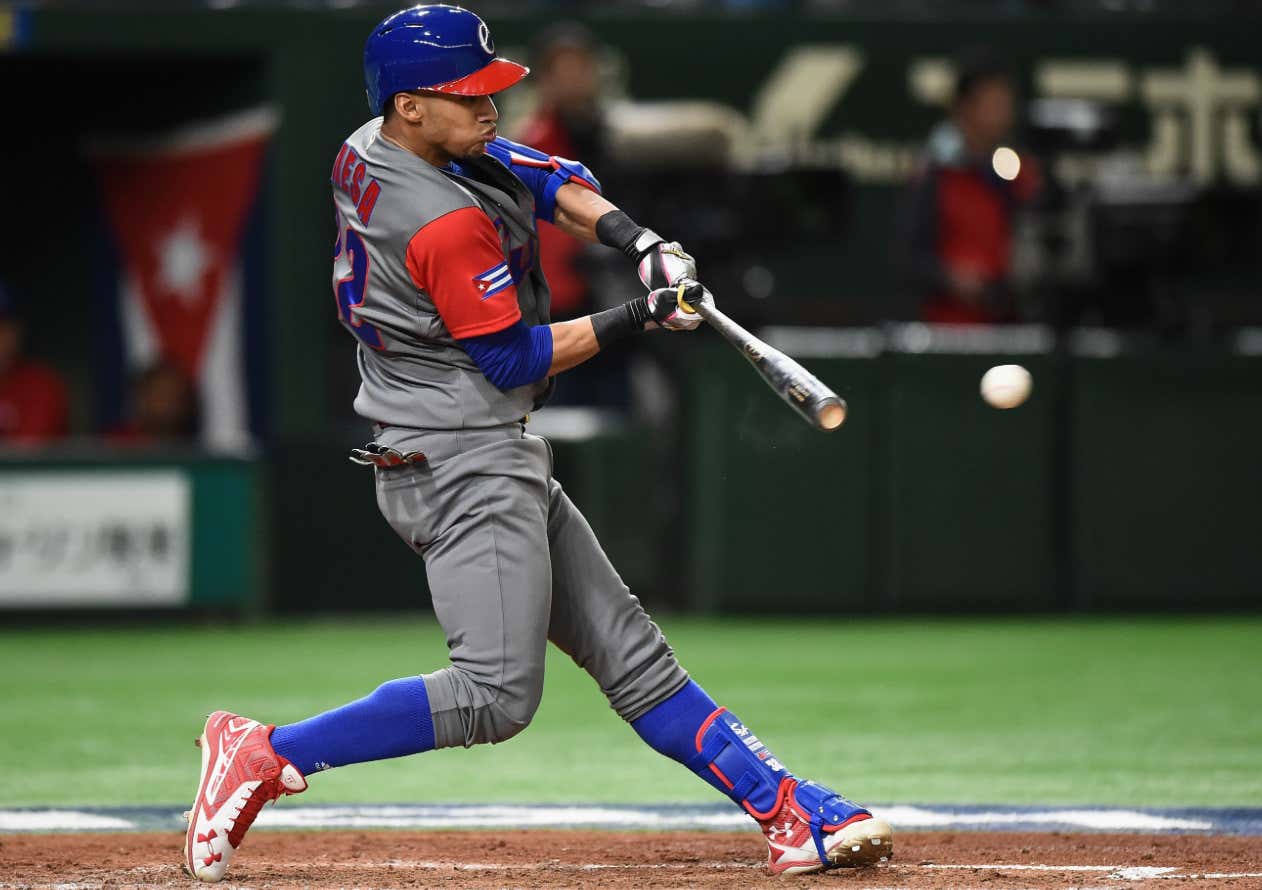 He’s still very young, but the holdup is that MLB has not cleared him to be a free agent yet. The Marlins also were very interested in Victor Victor, and the Yankees just acquired more International Money and they love spending that, I’m sure they will be interested as well. It is for sure something to keep your eye on, could be a legit prospect heading to Baltimore. 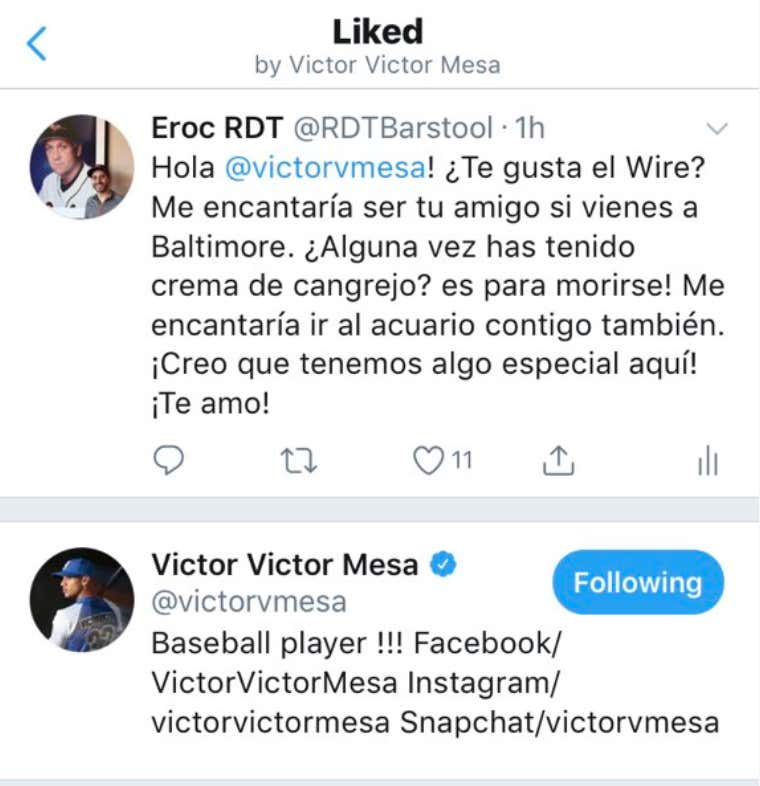 I took it upon myself to see if Victor Victor has seen The Wire, had cream of crab, and if he would like to go to the aquarium with me. He liked the tweet, so he basically confirmed that he’s coming to Baltimore, just waiting on the handshake. 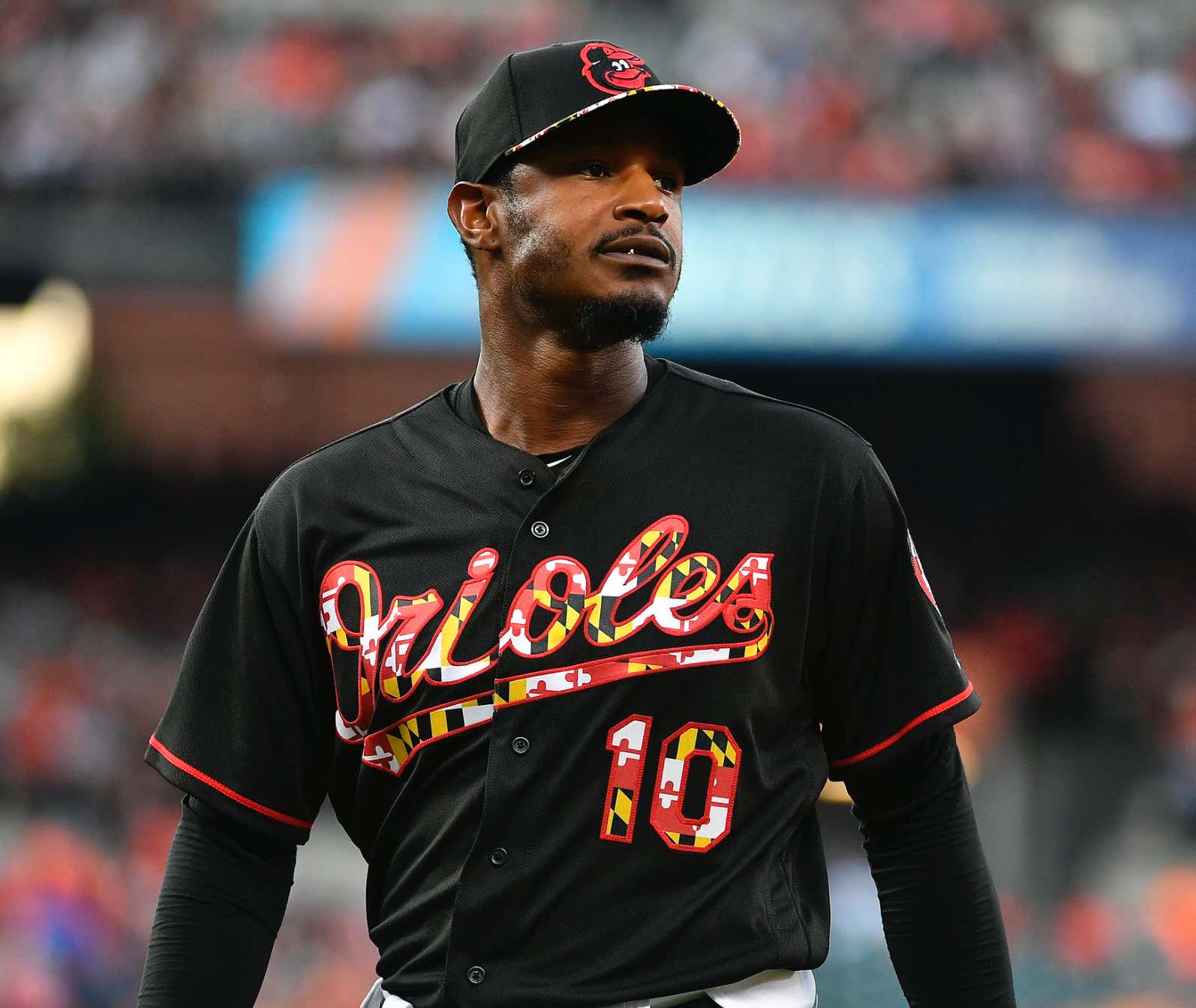 Quite a situation we have going on with Adam Jones and the Orioles here. Jones has his 10-5 rights. 10 years in the league, and 5 with the same team, it’s basically a no-trade clause. He can veto any trade involving himself. He’s a 33-year-old centerfielder with an expiring contract. The Orioles would like to move him for a few reasons. Rumor has it that he as already nixed a trade or two and has expressed his desire to remain an Oriole past the deadline, as well as next season.

The big reason the Orioles want to move him is because they want to get young. Cedric Mullins is banging on the door down in Norfolk and is the center fielder of the future. Adam knows that. With that being said, I’m not sure he would be thrilled if the Orioles asked him to move to right field to make room for Mullins. And rightfully so. Adam has been here since 2008 and LOVES Baltimore. He mentioned his work in the community as a reason he wants to stay. I’d imagine he also wants to tutor and mentor the young guys. Now him exercising his 10-5 rights is fine with me, he has earned the right to do that. I get why some are upset, because they want the Orioles to trade him and get some prospect. What will a 33-year-old outfielder who needs to move to the corner with an expiring contract bring in? No one that will change your franchise. I imagine him as a captain going down with his ship, it’s like a pride thing with him. He was here when it was terrible, signed an extension, was here when they found success, and again when they’re bad.

I would think that Adam would accept any trade out of Baltimore because I’m not sure if you’ve heard, but the Orioles stink this year. Apparently Philly was very interested in him, and he said no to that, and I’m sure there were a few others teams interested in his services. But as of Monday night, he has said he wants to stay in Baltimore. Dan Duquette said he expects AJ to be an Oriole on Wednesday, but has said multiple times the Orioles want to go young for the future and says he doesn’t know where AJ will end up next season. So we may have ourselves a standoff. A GM who may not be here next year vs the heart and soul of the team and clubhouse who may not be here next year.

Now I would like to see Adam playing on a team in October and him having a chance to help out a team win a ring, but I also won’t hate seeing him in September as the Orioles finish 60 games back and he’s having the time of his life at Camden.

Bat toss of the week

Yusniel Diaz hit his first homer since coming over in the Machado trade. Love the kid already, check out the swagger on that home run trot. Don’t show Brian McCann.