Prior to this tweet 12 days ago, I had not heard of the Mattress Firm conspiracy. Apparently it went viral on Reddit back in January, but the thread got too hot and the main post was deleted. Was it deleted under duress? It’s hard to say. But after going reviral on Twitter this week, I decided now was the best time to apply the pressure to Mattress Firm and see what shakes.

Mattress Firm is some sort of giant money laundering scheme. They are fucking everywhere and always empty. I remember seeing four Mattress Firms all on each corner of an intersection once, there is no way there is such a demand for mattresses.

Now, the premise here is akin to that of a late-’80s knockoff Jerry Seinfeld’s opening routine. “What’s the deal with Mattress Firm? Did you hear about this? Have your seen about this Mattress Firm? How often do people buy mattresses?” But… actually, why are there so many Mattress Firms? According to Business Insider there are over 3,500 Mattress Firms in the US, along with at least 80 distribution centers. Feels like roughly 3,000 too many. 10 per state on average sounds about right. Throw a couple more in California, put exactly one in states like Montana and Wyoming, slam a bunch in New York and you should end up in the 500 range. Look at this shit. 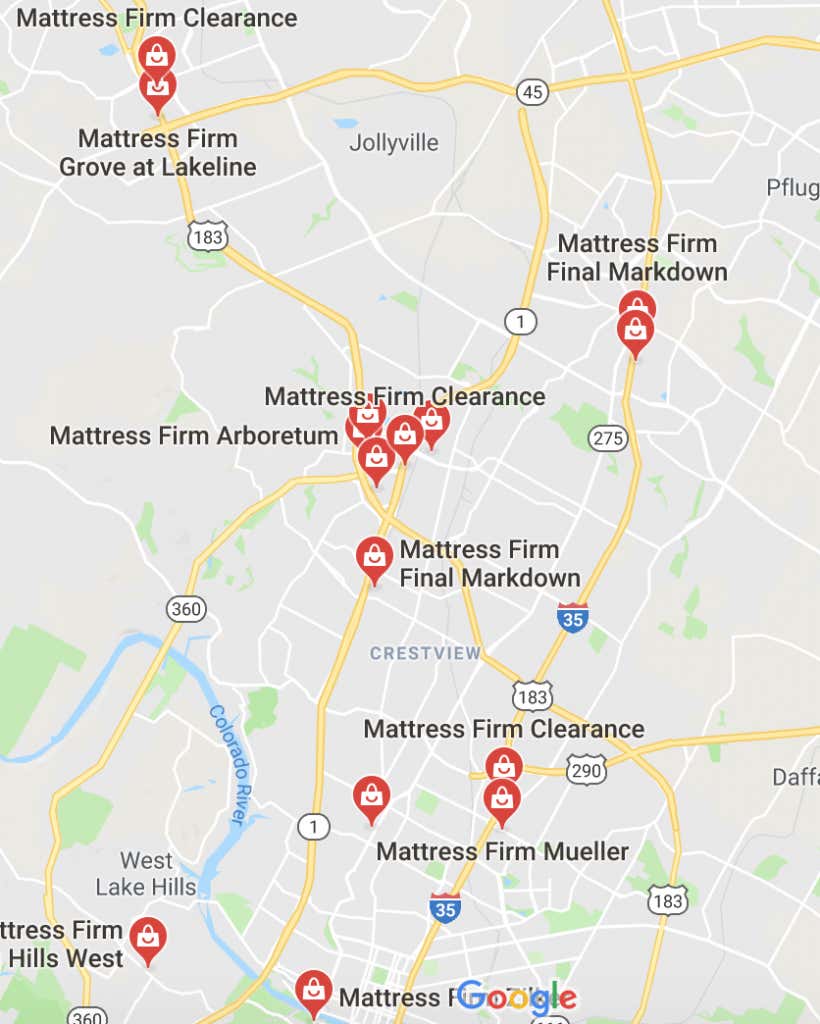 That’s Austin, Texas. I realize Texas is massive and Austin is a major metropolis but that’s entirely too many Mattress Firms per square mile. The National Sleep Foundation estimates people should be re-upping on mattresses every 8-10 years. It’s a necessity, but it’s not exactly in the purchasing rotation of toilet paper or milk. So that many grocery stores in such a compact area, I’m all on board. MATTRESS FIRMS?

When I was still wasting away in my early-20s as a security guard, one of my friends worked at a Sleepy’s in Dedham on route one. The one in the roundabout next to the Dunkin’ Donuts not the one next to Amazing Adult Express in front of Tahiti roughly 1,000 feet away. In 2015, Mattress Firm acquired Sleepy’s for $750 Mil, so it’s all the same company now. Buying out the competition and gaining all that real estate in one move feels like a keen business strategy on the legal and shady sides. But back to the story at hand, during the days I would go visit him. If you have a pal who works at one of these places, definitely go pay him a visit. Those places are among the best to get high as a kite and kick back, mostly because of the dozens of cloud soft mattresses and pillows at your immediately disposal. And the fact that, maybe once over the course of a day someone looking to buy a mattress will poke their head in, you can truly zone out and do whatever your heart desires. To call it a dream job would be selling it a bit high, but boy is it an incredible way to do nothing for hours upon hours a week while still collecting a check. It never crossed my mind while I was rolling up Game Greens at the front desk that I was amidst a money laundering operation, but the second this conspiracy was brought to my attention it certainly made a lot of sense.

Where the conspiracy lacks is that so far people just assume it’s a front to launder money. Which, when your business model requires giant trucks that haul mass quantities from state to state, I can definitely see. Traditional mattresses have long been used for storing money and drugs, at least in the movies, so why not? But there’s nothing tangible tying them to such nefarious deeds. Just the reddit and tweet thread from this week. However, the reddit thread was deleted, which I cannot understand. What a relatively harmless accusation to warrant deletion – that is, if it’s false. This is a capitalistic, free market society after all, open as many god damn stores as you please if you’ve got the means. I’ll tell you what, if Big Foot conspiracy threads starting randomly getting deleted, I’d start believing in him a helluva lot more.

While the thread on Twitter got some action this week, it wasn’t deleted. Instead, Mattress Firm’s social media chimed in. Which, in my opinion, became a classic case of looking more guilty than if they hadn’t said a damn thing at all.

Why you being so loud for, Mattress Firm? Tho doth protest like a motherfucker, eh? Also Mattress Firm’s Twitter bio reads, “Your budget stretches further,” which would be an unreal tagline for someone moving dope by the tons. That’s not evidence of any sort, but if there are any national wholesalers reading this I’ll take a modest 5% for planting that in your brain.

So far this conspiracy has potential of money laundering from state to state, having so many stores that it would be easier to cook the books at certain locations in order to show profits despite not actually selling anything, and a company in public denial of lunatics with Twitter accounts. If only there was an international angle to this story.

Steinhoff said it would pay $64 a share, more than double Friday’s closing price of $29.74, for Mattress Firm. The boards of both companies have approved the deal, the companies said in a statement.

The world’s largest mattress retail distribution company, you say? Paying more than double to acquire such a pipeline feels fair. The ability to hide in plain sight with trucks and distribution centers, a headquarters located in a foreign land, stores that are oft-empty yet still sell a product that people need, constant denial and deletion of posts when the subject is brought up, all of it feels like the perfect storm for a legitimate conspiracy. I need at least one truck getting pulled over and the mattresses all being filled with illicit substances and wads on top of wads of cash to truly blow this one open, but even until that day I’ve seen enough to be all in on the Mattress Firm Conspiracy.