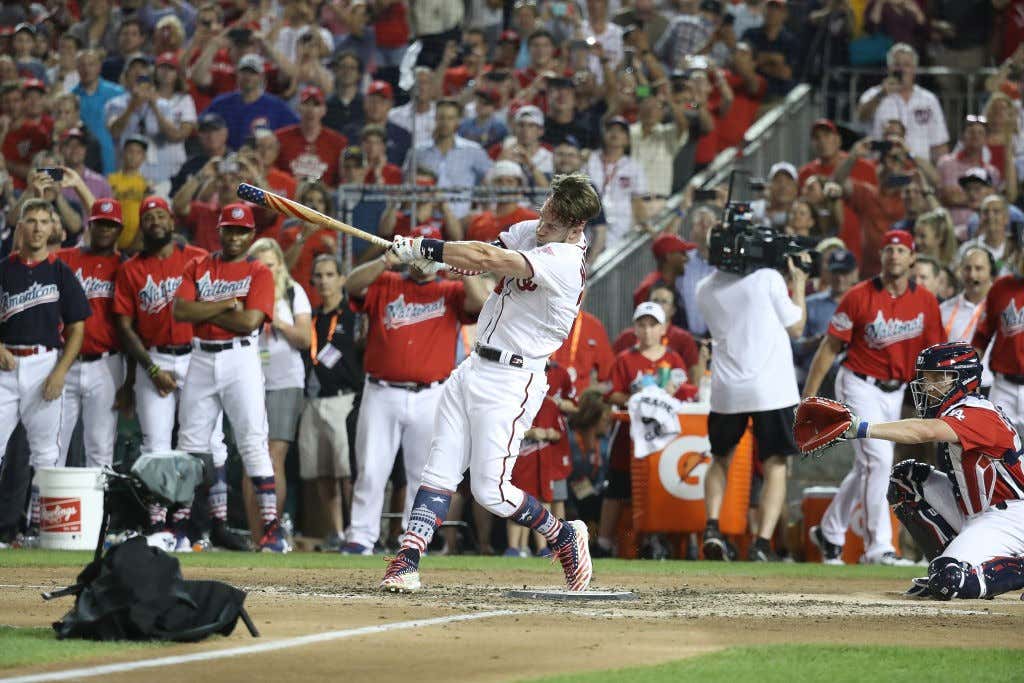 Last night’s home run derby was obviously incredible. I came into the night kind of uneasy about the rules and the timing and what not, but the night was perfect. Whether it was Rhys Hoskins bursting out of the gates, or Max Muncy coming from behind to top Javy Baez, or Bregman just coming up short in his comeback, the first round was everything you could have asked for in terms of excitement. As you probably have seen by now (I hope) Harper out-slugged Schwarber in an electric finals to take home the trophy. He was down 9 homers with just under a minute to go, and he won with relative ease in bonus time. Just insane stuff.

I immediately went to the Twitter machine and voiced my opinion that the derby has surpassed the dunk contest in terms of something I get excited to watch during the sports’ respective all star breaks. Coley, Reags, and the rest of basketball twitter attempted to fist fight me through the inter-webs.

Now 100% the dunk contest in it’s history has been better than the home run derby as a whole. The days of Spud Webb, MJ, Vince Carter, Dwight Howard, and Jason Richardson were certainly unbelievable, but the event has absolutely grown stale over the recent years. I mean there’s only so many dunks you can do. Going through the legs and doing a 360 is no longer revolutionary. Dunking two balls at the same time has been done. Dunking on a higher rim has been done. Jumping over someone is boring. It’s all repetitive at this point and the event has definitely lost its flare. Now I’m obviously a baseball junkie, but I for sure enjoy me a ton of basketball, so this isn’t bias at all. I honestly find myself caring about the skills competition and the 3 point contest more than the dunk contest these days.

It honestly starts with the judges. Every single judge, at minimum, gives an 8 on every completed dunk. The scoring has to be raised to at least 25. You can’t keep it at 1-10 otherwise you see way too many 50s. Also, Kenny Smith being the hype man of the whole thing is a joke and a half. No one needs that. Last night the annoying Jessica Mendoza was sent into the outfield to shag fly balls. It prevented her from ruining the event, like she almost did in 2017.

The way Major League Baseball has switched things up with the tournament style bracket and the timer has been a smashing success. The only downfall is the rule where you need to wait for the ball to land in order to swing again. It would be even better if you lowered the amount of minutes per round and then had these guys swinging non-stop (I guess Harper kind of did that last night, but who cares). That’s also probably a good way to get hurt, so maybe it’s better they leave that in for the players’ sake.

Either way, to follow up 2017’s derby, where Aaron Judge, Bour, Sano, and Gary Sanchez sent balls into Saturn’s orbit, with one that easily topped it was impressive and shows this format and event has new life and staying power.

The field honestly was pretty terrible in terms of star power (no Trout, Judge, Sanchez, Stanton, Ramirez, Betts, Martinez), but it didn’t matter. Harper wasn’t the only name to put on a show. Kyle Schwarber’s run in the semifinals to beat Hoskins was awesome. He wouldn’t stop hitting bombs.

Rhys Hosksins was awesome in his debut. Javy Baez hit the furthest homer of the night, over 470 feet. Everyone, short of Jesus Aguilar who seemed to not even know what was going on, entertained the masses watching at home. The NBA dunk contest needs big time names to thrive and even then it’s not a guarantee to succeed.

The dunk contest is dead while the home run derby is alive as it’s ever been. Don’t @ me.