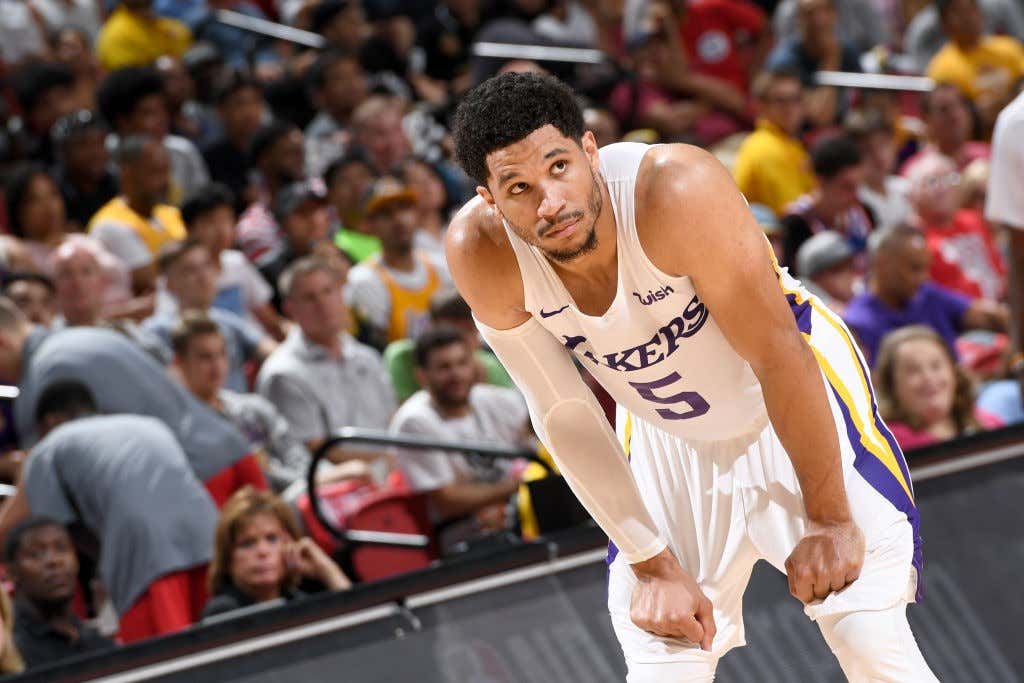 Alright welcome back to another edition of Last Night In The NBA where we catch you up on everything that went down from the night before in the Association. It was the Semifinals of the Vegas Summer League, and boy did it not disappoint. With a spot in the Final on the line, both games were wildly entertaining and even if you want to be a hardo and scream that these games don’t matter, then you simply hate sports. Both games decided by 5 points or less, one including a double overtime and both with awesome individual performances we are left with a rematch of the 2017 Vegas Final with POR/LAL. The NBA clearly has a parody problem if you ask me. Same teams always in the Finals, same teams always in the Summer League Finals, when is Adam Silver going to do something about this? Anyway, if you were captivated by the Home Run Derby instead and missed some of the basketball  that went down, here’s what happened

The first game of the night was an absolute thriller and honestly was the perfect matchup given everything thats happened this summer. When these two teams play during the regular season it will obviously be a big deal for a completely different reason, but the Summer League teams played with every bit of intensity you would want in a Semifinal matchup. For the Lakers things got off to a great start early, mostly because Svi couldn’t miss

You know how you find yourself on an NBA roster? You shoot lights out like Svi has this entire summer. With 6 3PM last night he has definitely shown LeBron enough so that he keeps him around. Remember the Lakers roster is going to need all the shooting it can get to surround LeBron, and the way Svi proved he can catch and shoot off screens and hit open looks, Lakers fans have every right to be excited about their rookie. He was awesome.

Now where it gets crazy is with the performance of their second year guard Josh Hart. He had a game high 37 points and made 6 3PM of his own, to go along with a solid 9 rebounds and a team best +12 in his

Nothing gets me going like a good point guard battle and that’s exactly what we got with Hart/Sexton. I mean this game was crazy, with 13 ties and 16 lead changes no team had more than a 3 point lead until the final minute of the second OT. That’s wild. As a team the Lakers had four guys in double figures (shoutout Jeff Ayres aka ASU legend Jeff Pendergraph who had 20 as well)

and shot a respectable 45/37%. It was also impressive that despite all the extra basketball the Lakers finished with just 11 TOs. They got almost nothing from their bench compared to CLE, as two guys combined for 10 points, so 102 points from your starting group in a Summer League game is nothing to sneeze at. Some may have wished this game just ended, but personally I loved the fact that it went to double OT. That’s the type of fake summer drama I crave.

For CLE, look while it would have been nice to make the Final, Cavs fans should still be happy with how this summer went, because it looks like Colin Sexton is going to be a real player

I mean the guy is an absolute nut, especially when he went to D-up Hart and started imitating Hart’s own celebration

Sexton led the way with 27 on 9-22 shooting, and as a team the Cavs had 6 total guys in double figures. The difference was their bench actually showed up, with 34 points coming from the second unit which went a long way to helping the Cavs shoot about the same as LA with 46/37% splits. Sadly a three by Billy Preston at the end of the double overtime rimmed out, or this puppy was heading to at least a third. After watching the Cavs this summer I’m fairly certain that they may stink once the real games start, but given how good guys like Sexton and Zizic have looked, they’ll still be worth your time to check in every once in a while on League Pass.

Sure maybe this game didn’t go into double OT, but it was still very entertaining. The Blazers have been on an absolute tear this summer, and last night was no different. If their Quarterfinal wins against BOS was all about their guards and their outside shooting, this win was all about the production from their big men. Led by Caleb Swanigan and his 21/16/2

you combine that with Zach Collins who had a very respectable 13/12 with 6 OREB, and they made MEM really pay by not playing Jaren Jackson Jr. In a game that gave us really the first subpar performance of the summer for Wade Baldwin IV (2-13), Archie Goodwin was that dude off the bench with 22 points, going a crazy 14-16 form the line. The FT difference was clearly a factor given how close the game was, with POR finishing with a 36-25 FTA difference. They made four more FTs than MEM even attempted. That’s gotta be frustrating on some level for Grizzlies fans.

POR was able to use a big second quarter to regain control of this game, and while each of the last two quarters were decided by 2 points or less, it was just enough for the Blazers to hold on and make their way back to a Summer League Final where they hope to not come up short this time.

For MEM, they had a good run in this tournament considering they were one of the lowest seeds, and to be on the brink of the Finals even without your best Summer League player is certainly respectable. Brandon Goodwin came off the bench and led all scorers with 27 points

Look call me crazy, but with what we saw from Wayne Seldon and Jaren Jackson Jr and Jevon Carter, with the improvement from Kobi Simmons, you add that to a healthy Gasol/Conley/Green and suddenly the Grizzlies don’t look like a team that should be picking in the high lottery. I’m not saying they’ll make the playoffs in a tough West, but they should be much, much better if everyone stays healthy and this sort of talent translates over to the regular season.

And that’s it! You’re now all caught up on everything that happened last night in the NBA. We now have two undefeated teams matching up tonight with a title on the line. I don’t care what you say, that’s a pretty exciting Summer League Final. As always feel free to be lame and do something other than watch fake basketball at night, just make sure to come back here tomorrow and I’ll fill you in on everything you missed.