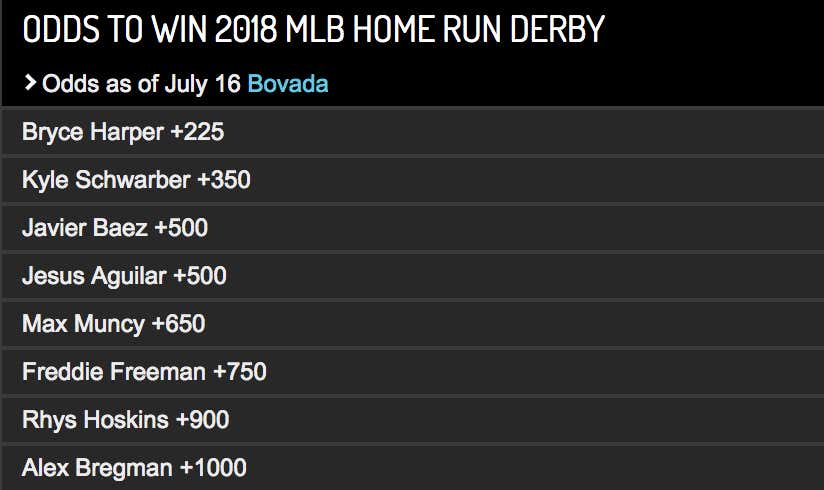 So we’ve got the home run derby tonight and I’m not going to beat around the bush, the field stinks out loud. There’s no J.D. Martinez, no Jose Ramirez, no Stanton, no Judge, no Betts. It’s about as lame a derby field as I can remember. The flashiest player in the field is hitting .214 and is only starting in the game because he’s a big name and it’s his home team’s ballpark that’s hosting the event. Still, I’m expecting Harper to put on quite a bit of a show because he’s a showman. He has experience in these contests before, when he went to the finals in the one at Citi Field and put on a clinic with his dad pitching.

Now there are a few other big time home run hitters in the field that are worth throwing some shekels on in my mind.

Jesus Aguilar is here to win this fucking thing and he is my pick with his odds chilling at +500. He currently leads the National League with 24 homers and has such easy power.

You get an extra 30 seconds added to your four minute round if you hit a few balls over 440 feet. Jesus will not have a problem with that task.

Kyle Schwarber (+350) is certainly a name that is easy on the eyes with the gigantic bombs he’s hit in his short career. The thing with Schwarber is that he swings so violently that I could see him tiring out towards the end of the round. He’s also up against a legit sleeper candidate in Alex Bregman, who has a sneaky career high in homers already with 20 already. Of all the people in the tournament who is going to take this thing 100% serious, it’s Alex Bregman and he’s sitting at +1000 which could be worth a very small wager if you’re trying to strike gold.

Bryce Harper obviously has the upper hand with having a lot of familiarity with the ballpark and its dimensions, but I don’t love his odds at +225. He is, however, going up against Freddie Freeman (+750) who has not hit a home run in batting practice in three years.. Yes, you heard me correctly, three years. Obviously he’s capable of doing that, but having nothing to lean in for this type of situation it’s tough to like his chances against someone who has been here and done well before.

I think the winner of Javy Baez (+500)/ Max Muncy(+650) gets to the finals. That’s going to be the most fun, competitive matchup of the first round in my mind.

So I’ve already said I would be taking Aguilar to win it all. If I had to pick someone on the other side it’d be Muncy. You could ride chalk with Harper, especially with his easy first round matchup, but I think it’s more fun to take someone in the +500’s or higher.