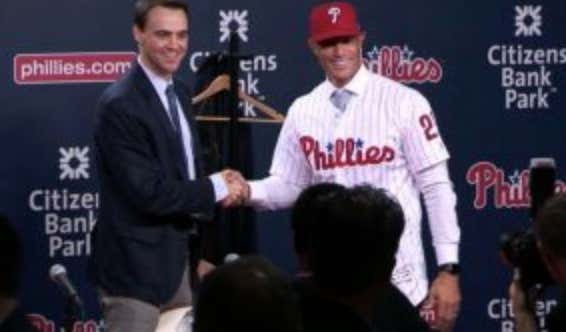 It was a really shitty weekend for the Phils losing 2 of 3 to the Marlins. Yet in the grand scheme of things, it wasn’t all that big of a deal. We can sit and wallow and replay all the mistakes from the weekend. We can place blame on a number of people as to why the number next to GB in the NL East standings is 0.5 instead of 2.5. These are thoughts and actions we have become used to as Phillies fans. Living in the past will never help you move forward. Observing from the past and learning from those mistakes is what makes teams into champions. Gabe instills these ideologies into the ballclub every day and I believe it is partly my duty to instill it into the fan base as well.

My observations from the first half of the season are that faith in this team still has a long way to go before it is restored. I mean a long way. First and foremost, the Phillies are currently 19th in the MLB in attendance. I get it baseball games are long and grueling. Plus, they are every day so you can easily just go tomorrow right? But its more than that. I get the feeling that fans are just waiting for that, “Here we go,” moment where the team collapses and they can once again place blame on something. The fall guy in the beginning of the season was Gabe, but many still doubt him. Now, I despise the man I am about to mention, but he is a Philly media juggernaut that loves to bask in the negative. He also has a herd of older fans who live and die by his word.

Interesting comment from #Phillies Manager Gabe Kapler on 1B Carlos Santana forgetting how many outs on a possible DP ball in 5th inning. “I give Carlos a pass “. Didn’t Santana not run hard on what was a fair ball down left field line earlier this season. @SportsRadioWIP

If a guy like Eskin continues on this negative mindset about a First Place team who is slowly rising back to prominence, then his minions will follow.

Here is another asshole for you.

Two mid-season predictions: Phillies will not win the NL East, and they will not get Manny Machado. Why not? Because they are not hungry enough. It’s that simple.

For 6 years the Phillies were barely a thought on your show. Now, as they enter the All-Star Break in FIRST PLACE, they speak about this team as if its 2014 again and Low Energy Ryne Sandberg is back at the helm.

What is even worse is Philly media is making Manny Machado the be all end all. I know for a fact that the Phillies are in the mix, but we will need to move on as a fan base if it doesn’t work out.

Both @shandershow and @RobMaaddi agree that it would be a "monumental disappointment" if the Phillies do not land Manny Machado before the deadline. Would you be angry with the organization if they don't? Call 610-632-0975

If they don’t land Machado, then they don’t land Machado. Using a phrase like, “monumental disappointment,” is just reaching. Would the team be better with him…more than likely. Personally, I would love nothing more than seeing Machado donning a Phillies uni. I am perfectly happy with giving up a number of players on our roster and farm to see that happen for only a couple months. However, I try to not let my emotions get in the way of logic. Sacrificing years of success down the road for a couple months of someone who could easily break his hand during his first AB with the Phillies is as risky as it gets. Plus, he doesn’t want to sign with a team right away. He wants to be paraded as most superstars want during Free Agency. Why go through that headache? Albeit, this most likely the thought process of Front Office, but what the fuck do I know. Why not just wait and see what happens?

I get it, fans want to see more offense and the Phillies have had trouble providing that sort of entertainment for you. Manny would definitely help with that. Marketing the team is the same as it’s ever been with a plethora of giveaways, but Manny would put us on the map. The best mascot in sports gives parents a reason to bring their kids, but parents and kids alike will want to come out to see Manny. However, it needs to be universally accepted by us fans that the world ain’t all sunshine and rainbows. It goes way deeper than that and it begins and ends with the Phillies narrative as portrayed by the Philadelphia media. It’s time to change that mindset and start to adapt the Gabe Kapler approach to life.

In conclusion, the First Half of the season is over and first place belongs to the Philadelphia Phillies. Here is a quick reminder of how volatile it is holding that top spot…The Mets had 7 game division lead with 17 to play in 2007. Losing to the Marlins was a wake-up call that there is no easy route to the Playoffs. But as a fan base, we need to have their backs. That means coming to grips with poor play from our $20m, First Basemen. It also means coming to grips with not landing a superstar. Fuck these radio guys man, I am sick and tired of their negativity running rampant when it comes to baseball in this city.

A couple more things before I sign off…Good luck to Rhys in the Home Run Derby tonight. If you want to win a shitty bottle of wine, retweet and like my tweet below, also follow me on twitter and I’ll pick someone in the next couple days. Lastly, I’ll probably churn out a first-half report of some sort and another Minor League Report at some point this week.

My name is TByrd and I cover the #Phillies on Barstool Sports. If you like the Phillies, shitty wine, and love Maikel Franco, then I need you to like, retweet and tag a friend for your chance to win this Limited Edition bottle I have. Maybe hit the follow button too #gophils pic.twitter.com/OgRNVamPK7