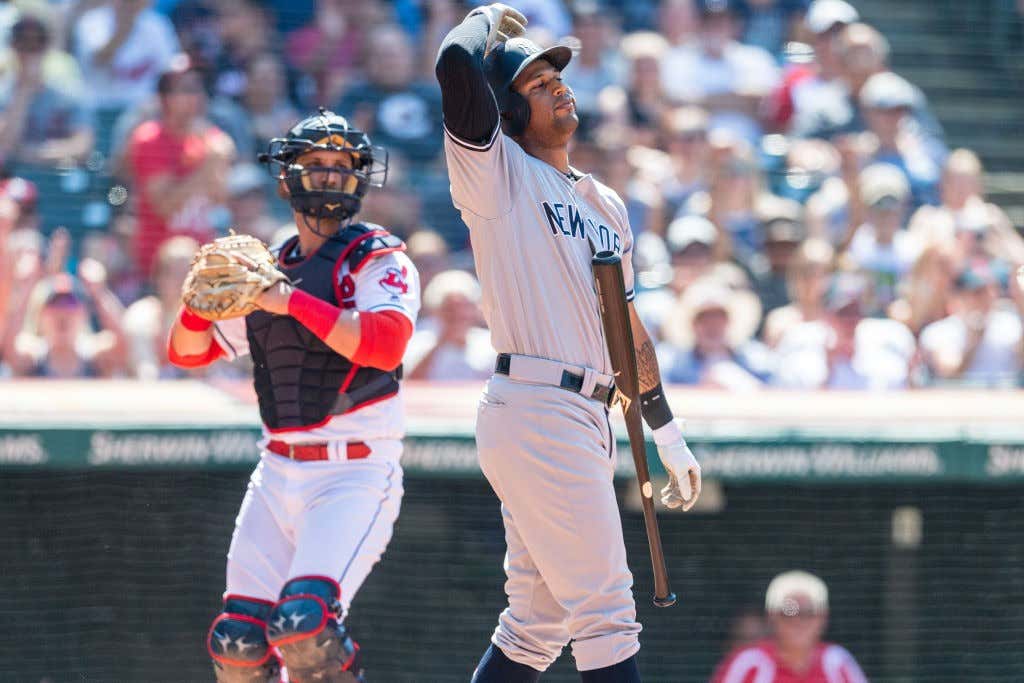 Alright I think we all have to be content with splitting a four game series in Cleveland. I feel like people overlook the Tribe when you’re talking about the powers of the American League. Obviously the Yankees, Red Sox, and Astros appear to be head and shoulders above the rest of baseball, but do not sleep on Cleveland. They’ve got three pretty good starters in Kluber, Bauer, and Clevinger. Their lineup is filled with dangerous hitters like Lindor and Ramirez. Their bullpen is probably what sets them a little further back from the pack, but that’s what I expect them to target heavily during the trade deadline. If I’ve got Cleveland for a five game series I’m certainly not going to overlook them, even if they’re division is a joke.

It’s tough to gain any ground against a team that doesn’t lose baseball games anymore. Splitting a series with a first place Cleveland team on the road should be viewed as a good result. Instead, it meant the Yankees dropped two more games in the AL East division race because Boston handled Toronto. I’ve said it a lot lately, but the way Boston can put away bad teams like they should is something I crave. The Yankees have their work cut out for them if they want to catch Boston for the division in the second half.

With this being only is second start since coming off the disabled list, I thought Tanaka looked very good out there. He’s always going to give up a bomb at some point and that came in the 4th when Encarnacion launched a two run shot out to left. In 15 starts this year, Tanaka has given up at least one home run in 13 of them. Other than that blemish I think this was very encouraging heading into the break. Severino, Tanaka, and CC help establish a good sense of consistency with the rotation. Domingo and Sonny do quite the opposite. I feel good when Tanaka is on the bump.

To the surprise of myself and many others, Greg Bird has flipped the switch and is starting to resemble the type of hitter we hoped he’d be heading into this season. Now this is usually the point where he gets ice cold again or gets hurt so we’ll have to see what happens, but for the past week he’s been extremely productive. Bird’s eight game hitting streak was snapped yesterday, but I’m liking what I’ve been seeing out of the first baseman. His home run swing yesterday was gorgeous.

Forget the terrible start, focus on the positives heading into the break and come out in the second half locked in.

The first bad call came on Friday night in the 8th inning with the Yankees down two runs. Aaron Judge had just reached first base on a hit by pitch with one out. With Aaron Hicks up, Boone sent Judge on a two strike pitch to try and make something happen. Hicks struck out and Judge was thrown out at second to end the inning. The red hot Giancarlo Stanton was due up next as the tying run. That prime opportunity was lost because of Boone’s unnecessary call. Stanton led off the next inning with a solo shot. It would have been nice if someone was on base for it.

The next call came on Saturday night with the Indians staging their rally in the 6th. The Yankees had themselves a 4-2 lead heading into the bottom of the frame. CC was pitching well to that point, but I thought this was an inning where if anyone got on he had to be pulled, especially with the hitters who were due up. After striking out Lindor to start the inning, CC gave up a single to Brantley and a walk to Ramirez. At that point right there you have to pull him and bring in Robertson, who was warming up. After an Encarnacion ground out to third, the tying runs moved into scoring position. Guyer hit a ball to Andujar, who pulled Greg Bird off the bag on the throw to first. With Ramirez running hard on the pitch, he was able to come around and score on Bird’s late throw home and tie the game. Now CC did his job here and did get a ground ball with two outs which should have ended the threat. Andujar has to make that play and charge the ball, instead of taking that step back. I still think Boone should have pulled CC way earlier in the inning and that’s a mistake that can’t happen in the future. That’s two times in a row now CC has been left in too long and gotten burned.

Yesterday was Boone’s worst decision by far. Chad Green came into the game in the 7th inning of a 2-2 ball game. He managed to work around a runner on second with just one out and got out unscathed. With a rested bullpen, Boone opted to send Chad out there for a second inning. He immediately served up a home run to Brantley, putting the Indians in front 3-2. Boone left him in for more. After a few more batters the Indians were ahead 5-2 and the game essentially over. There was no reason to have Chad out there for so long. You have Jonathan Holder, Adam Warren, and even A.J. Cole very well rested. You probably have Betances ready as well since he didn’t pitch on Friday. It just didn’t make any sense to leave him in for so long. Not ideal.

Good News: Brian Cashman is Not Going to Overpay for Manny Machado

Would having Manny Machado on the Yankees be awesome? Silly question. Do we need Manny Machado on the Yankees this second? No we do not. I was only happy with a Machado trade if it included mid-level prospects and that’s it. The Orioles want Justus Sheffield or Florial. Those are two untouchable guys right now. Sheffield is going to be an impact player for the Yankees in the second half whether it comes from the rotation or the bullpen. If the Yankees have to trade Florial then it needs to be for an ace coming back and that’s it. If the Phillies want to throw the kitchen sink at a player who isn’t going to sign back with them in the offseason then so be it. Get Manny out of the AL so he can stop terrorizing our pitching and then go after him in the offseason when it’s his call on where he plays and no players have to be traded away.

Gary is going to come back right around the start of the second half of the season, if not right after. His addition to the lineup will help immensely. We’ve gotten a good look at what life is like without Gary Sanchez. It’s not great. Since Gary’s injury, Romine is hitting .200 with just four RBIs. Kyle Higaskioka is hitting .185 with an OPS of just .267. Now most of us expected Romine to come back to Earth and get exposed with being the primary catcher. There were actually some people out there who were so turned off by Gary’s defensive miscues that they wanted him gone. They really thought Romine should be the starter. Well, these two weeks have shown us all how much we miss Gary on this team. The Yankees have almost zero chance of throwing out baserunners when Gary isn’t catching. His arm and his bat are two things that help this team so goddamn much. I can’t wait for his return.

I agree completely with what Brett Gardner said after the game on Sunday about the team’s chances in the second half. His words should be echoed throughout the fan base.

I’m going to recap the first half in a blog tomorrow, but we’re about to record a 1st Half in Review podcast for The Short Porch. Make sure to check back for the new episode in a few hours.

Barstool at the Ballpark

A week from yesterday we’re back at Yankee Stadium for Barstool at the Ballpark against the Mets. It appears like we’re getting Tanaka on the bump for Sunday Night Baseball. The second level is already sold out so make sure your grab a ticket while they’re available.