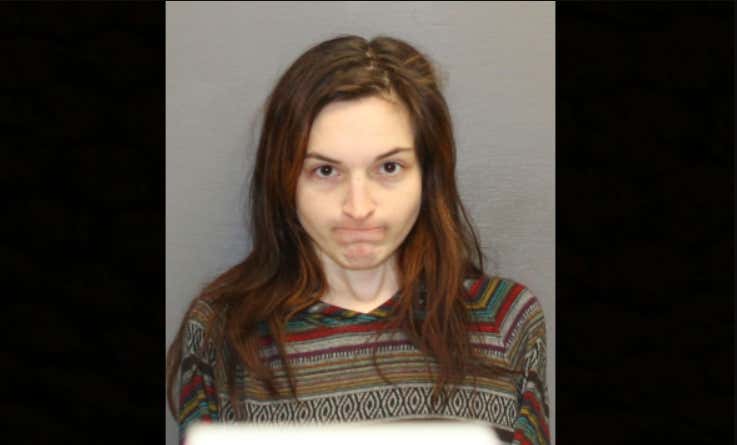 Source – A machete-wielding Montana woman broke into her ex-boyfriend’s home, directed him to disrobe, and then forced him to have sex with her, according to police.

As detailed in a criminal complaint, Samantha Mears, 19, entered the victim’s Great Falls residence Friday when he was not home. When the man returned, Mears “confronted him from behind with a machete.” Mears then allegedly told the man to “get on the bed and remove his clothes.”

The victim told police that he complied with Mears “for fear of his safety,” adding that he “did not feel he could leave the room at that time without being hurt by Mears.”

Investigators charge that after Mears removed her pants, she climbed atop the victim “and they engaged in intercourse.” The victim said that Mears–who was holding the machete–bit him on the arm and “continued to have sex with him after he attempted to end” the encounter.

“After the intercourse, Mears sat on the bed, still armed with the machete, with her back against the wall,” the complaint notes. It was during this time that the victim took several photos of Mears “with the machete in her hand.”

I know it’s natural for most guys to wonder what exactly happened to the victim that is so bad. Samantha is not exactly a snack, but I’m willing to guess she’s a Great Falls 7.5 at least. He got laid. He got to sit back and have her do all the work. Sounds pretty good, right? Wrong. A thousand times wrong. Spoken like someone who never brought a naked dick to a machete fight.

Nothing says “I mean it” like a machete. That is the nuclear weapon of blades. Now, if she’s brought a Swiss Army knife or a steak knife, I might agree with you. But I’m going to draw the line at anything larger than say, a 7″ chef’s knife will turn was could otherwise be just your classic, no-attachment makeup sex into nightmare fuel. Instead of victim shaming this guy, we should all admire him for being able to perform with two feet of razor sharp metal death staring him in the crotch. Then casually snapping off pictures while she laid there with her funny business exposed and the weapon in her hand makes this guy the coolest cat in America this week. He deserves to be hailed as a hero, not questioned.

Finally, if you’re a 19-year-old in the middle of Montana who can’t get your ex to bang you without threatening him with a sword, you seriously need to reevaluate your life. But then, I suppose Samantha already knew that.