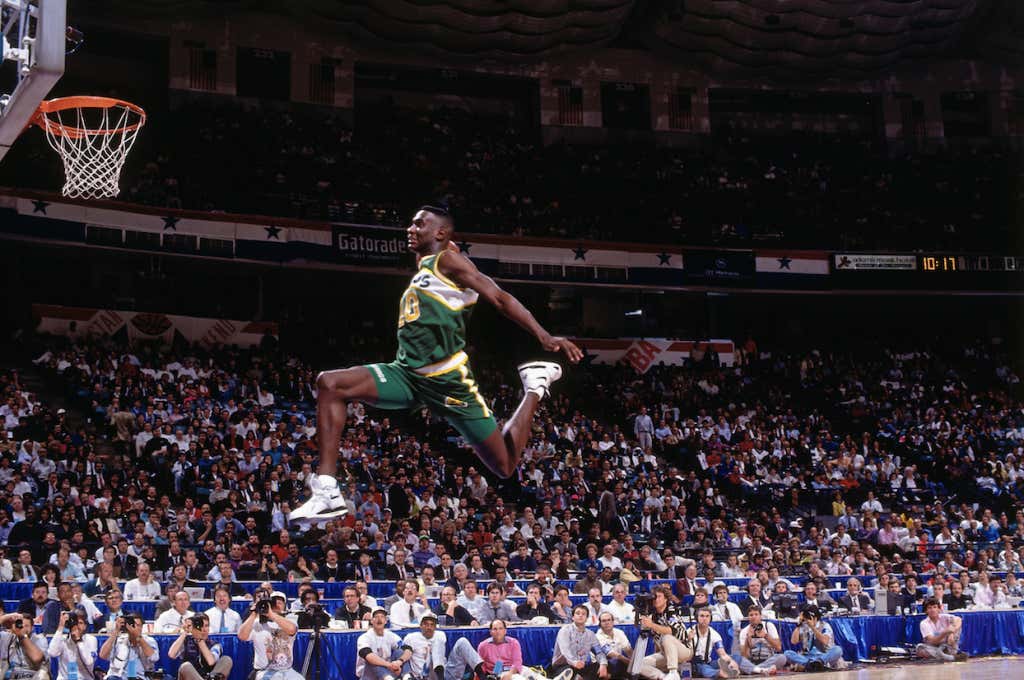 Good morning everybody, happy Wednesday! As I was preparing for today’s blog I had a lot of people in mind, but it hit me that since we did Gary Payton yesterday, it only makes sense that we complete the puzzle and look at his main running mate Shawn Kemp. I figured you wouldn’t mind because chances are you have a pulse and love dunks. Who doesn’t love a good dunk? Well if there’s one thing Shawn Kemp could do (besides cocaine), it’s dunk the damn basketball like a monster.

Kemp played a total of 14 seasons in the NBA, 8 of them with Seattle, where we was a certified beast averaging a cool 16/9.6/1.8 while shooting 52% from the field. I’m not sure outside of like Jordan there was a more exciting player in the 90s than prime Shawn Kemp. When it was all said and done Kemp was a 6x All Star, 3x All NBA Second Team member, and had a pretty good nickname of “Reign Man” during his run. Even once Kemp got traded to the Cavs in 1997 as part of a three team deal he was just as effective averaging 18.5/9.1/2.1 during his three seasons there. What’s crazy about his success in CLE was he showed up to camp over 300 pounds! That’s just the greatness that was Shawn Kemp. Once we got to the early 2000s he bounced around between POR and ORL before officially retiring in 2003 at the age of 33.

One of my favorite dunkers of all time it was a sad day for yours truly when young Greenie realized he would never be able to dunk like Kemp. Growing up I had posters of all sorts of NBA players on my walls. From Thunder Dan Majerle to Tim Duncan to Kemp to that one where Reggie Miller was shooting in the clouds, to a bunch of Celts guys. As I said in the Payton blog if you’re around my age Shawn Kemp definitely had a huge impact on your NBA fandom during the mid 90s, so why not take a few moments to kick start our day by appreciating his craft. Remember if there’s anything or anyone in particular you’d like to see in this blog just list them in the comments. In the meantime enjoy today’s Top 10 and have yourself a kickass Wednesday